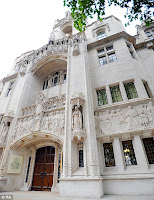 A further excellent television programme about the Supreme Court of the U.K. may be viewed - "Channel 4: Britain's Supreme Court."  It lasts for 72 minutes but, be warned, that at the outset and around the halfway point there are a few adverts!  Just sit through the ones in the middle!  The programme looks at the court's first year - 2009 to 2010.  At the outset the judges were sworn - "to do right to all manner of persons according to the laws and usages of this Realm" - an oath taken by all who sit in judgment in our courts from the lowest magistrate to the highest judge.

There are many fascinating glimpses of not just the formality of the legal proceedings but also of the personalities involved.  The optimistic Mrs Purdy is seen as judgment is given in her favour in the very last sitting of the House of Lords.  The "Law Lords" ordered the Director of Public Prosecutions to issue specific guidance as to prosecutions for the offence of assisting suicide.  Next, Tim Owen QC is shown addressing the Supreme Court in its very first case concerning the assets of alleged terrorists.  The Supreme Court eventually came down against the government and required the executive to secure its powers from Parliament.

Next the Official Opening of the court by
Her Majesty is shown.  In the U.K., justice is administered in the name of The Crown and Her Majesty personifies The Crown.  A lot of trouble was clearly taken to fix the plaque - (which showing the Queen's profile) - in the best place on the wall.  This was clearly a pleasant and somewhat jolly day for all concerned.  Lady Hale joked about her male colleagues not opting to wear a similar hat to herself.

Perhaps the most interesting and quite frankly moving case in the programme is that of Mrs Katherine Smith whose son Jason died of heat exhuastion in Iraq.  The essential decency of Mrs Smith shines through this programme.  We see her at home in Scotland holding her son's Celtic scarf and his other bits and pieces.  Basically, she wanted an inquest so that she would know exactly how her son died.  One might think of this as a basic human need for a grieving parent but it led to complex legal arguments about the responsibility of the State toward members of the Armed Forces.  Counsel acting for Mrs Smith was Dinah Rose QC who points out in the programme how the Human Rights Act 1998 has transformed public law in the U.K. Of course, it is only the most difficult and important cases which get to the Supreme Court but those cases are not necessarily the full measure of the worth of the Act.  It is effective in securing elementary fairness for people appearing every day before all courts and tribunals and in their daily dealings with public authorities.  The court finally ruled partially in Mrs Smith's favour in that, based on the factual situation in which Private Smith had been placed in whilst serving in Iraq, there should be an inquest complying with Article 2 of the European Convention on Human Rights.   However, the court was reluctant to go further and automatically require such inquests for every death abroad of members of the armed forces.  The full extent - if any - of human rights protection for soldiers on the battlefield must await another day for decision.  Mrs Smith's case was fought with the benefit of legal aid.

The programme also looked at the Norris v United States of America case.  Ian Norris - former Chief Executive of Morgan Crucible - was eventually extradited to the USA where he was tried, convicted and imprisoned.  Jonathan Sumption QC can be seen arguing that the right to family life (Article 8) was engaged and should be balanced against the importance of extradition in the circumstances of this case.  However, the controversial extradition arrangements with the USA prevailed.

The interesting views of some of the lawyers are revealed.  Jonathan Sumption QC expresses the view that we are a more litigious society than a generation or so ago but litigation is expensive and involves a lot of mental anguish for the parties.  It is an "evil" best avoided though it is not always possible to do so.  The important views of some of the judges are revealed.  Although the judges do discuss the cases it is essential that each judge reaches his or her own decision.  Only exceptionally are decisions handed down quickly.  The judge must not let emotion get in the way.  The judge's job is to apply the law and uphold the rule of law which must be "all powerful."

Above all the programme brings out the human side of the various cases and is a timely reminder that the law is ultimately about people.  Our own common law stemmed from the people and was fashioned by the judges through hundreds of judicial decisions many of which lie in libraries gathering dust.  Those decisions date from the earliest years of our legal development ("The Year Books") to the modern law reports.   By the late twentieth century, the law had become somewhat sclerotic but the Human Rights Act 1998 has galvanised it back into life.  Abandonment of the Human Rights Act is advocated by some.  Even abandonment of the European Convention is pressed for by others.  It cannot be claimed that all is perfect but built into the Act is a command from Parliament to the courts to "take into account" the Convention.  It is section 3.  Prior to the Act they occasionally referred to the Convention but this was relatively rare.  We would retreat from the present position at some risk to our liberties.  Cases such as that of Private Smith and his magnificently determined mother should all remind us that human rights are hard fought and that important battles to secure them undoubtedly lie ahead.

A footnote:  Lord Phillips (President of the Supreme Court) has made a speech in which he expresses concern that funding cuts will affect the independence from Ministers of the court - see BBC 9th February 2011.  Here is a link to Lord Phillips' speech.  The Head of Legal blog is critical of Lord Phillips' view.  The UK Human Rights blog looks at this speech (here) and also at a further speech by Lord Neuberger MR.  Here is a link to Lord Neuberger's speech.
Posted by ObiterJ at Wednesday, February 09, 2011