A No Deal Brexit ~ Government Preparations for no deal ~ The WTO

What will happen after 29 March 2019 if there is no Withdrawal Agreement between the UK and the EU?  In this "no deal" or "cliff edge" scenario, the UK would step entirely away from the EU ("third country status") and there would not be an implementation / transition period to protect British business / commerce from the inevitable ravages of such a status.  How should businesses and individuals prepare for this situation?

On 23 August, the UK government published Preparations for a No Deal Brexit.  The speech of the Secretary of State for Exiting the EU is HERE.   Just how confident one should be that a deal will be achieved is highly debatable even though the Minister referred to a No Deal Brexit as an "unlikely event" and said that he was confident that a "good deal is within our sights."

Inside the Court of Appeal (Criminal Division)

On 21 August, the Judiciary published the Court of Appeal (Criminal Division) Annual Report 2016-17.  In the Preface to the report, the Lord Chief Justice notes that the Court of Appeal (Criminal Division) is "there to ensure that so far as humanly possible convictions which are unsafe are set aside, and sentences which are either manifestly excessive or unduly lenient are corrected.  Convictions which are safe and sentences which are appropriate must be upheld. That simple summary of the objective of the Court reveals its importance, and the high level of responsibility which all who work in the Court, whether in the office or in the Court itself, must carry."

"Inside the Court of Appeal" was a documentary

The tragic death of Jack Adcock

Jack Adcock was born on 15 July 2004.  He died at Leicester Royal Infirmary on 18 February 2011.  The clinical cause of his death was sepsis - a condition explained by the NHS and also see Sepsis Trust.  According to the Trust five people die every hour due to sepsis - "Sepsis can initially look like flu, gastroenteritis or a chest infection. There is no one sign, and symptoms present differently between adults and children."


The BBC Panorama coverage of this case is an excellent, detailed and very moving programme.

Controversy over the burqa

Conservative MP and former Foreign Secretary - the Rt. Hon. Boris Johnson MP - caused considerable furore over a piece he wrote for The Telegraph on 5 August - Denmark has got it wrong. Yes, the burka is oppressive and ridiculous - but that's still no reason to ban it.   Mr Johnson expressed surprise that Denmark had joined several other European countries - e.g. France, Belgium - "in imposing a ban on the niqab and the burka – those items of Muslim head-gear that obscure the female face."  He continued to say that he agreed with those who think that the burka is oppressive - "I would go further and say that it is absolutely ridiculous that people should choose to go around looking like letter boxes; ...."

Independence of the Parole Board

In 2009, Mr Wakenshaw received an indeterminate sentence of imprisonment for public protection and has now served the minimum term stipulated within his sentence.   His continued detention is periodically reviewed by the Parole Board to determine his suitability for release.

In judicial review proceedings, Mr Wakenshaw claimed that the Parole Board lacked the requisite independence under the common law and article 5(4) of the European Convention on Human Rights.  He did not wish to prevent his current review going ahead but, more fundamentally, he claimed a declaration that the Parole Board was not an objectively fair adjudicative body. 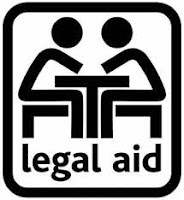 The post World War 2 welfare state comprised the NHS; universal housing; state security (benefits); and universal education.  According to the late Sir Henry Brooke (HERE), Legal Aid was not a pillar of the welfare state even though law underpins crucial matters such as the NHS structure, rights to medical treatment, housing, welfare, education and the general rights of those charged with criminal offences.  Under the Legal Aid and Advice Act 1949 legal aid was to be available in all courts and tribunals where lawyers normally appeared for private clients.  Eligibility should be extended to those of “small or moderate means”, and above a free limit there should be a sliding scale of contributions. 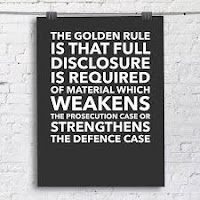 In 2017, Liam Allan, a criminology student at Greenwich University, was charged with six counts of rape and six of sexual assault.  During the trial, the contents came to light of mobile telephone messages sent by the complainant including messages asking Mr Allan for sex.  This material had been held electronically by the Police even though Mr Allan had maintained all along that the sex was consensual.  The outcome was that prosecuting counsel (Mr Jerry Hayes) offered no evidence against Mr Allan and the case against him ended.

The investigative role of the Police gives them almost a monopoly over the collection of information.  Several lines of enquiry might have been followed and a considerable volume of information obtained but the prosecution may not need to use all of it in a particular case.   There is often so-called "UNUSED" material and it is possible that there is unused material which is capable of of undermining the case for the prosecution against the accused, or of assisting the case for the accused.

The prison population in England and Wales stood at 83,107 on 3 August 2018 against a "useable operational capacity" of 86,012 - MoJ Prison Population figures.  The terms used in the statistics are defined as: