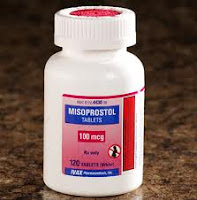 Procuring miscarriage is a criminal offence which carries a maximum punishment of life imprisonment.  The Offences against the Person Act 1861 section 58:

At the Crown Court sitting at Leeds, Sarah Louise Catt pleaded guilty to this offence and was sentenced to 8 years imprisonment.  Apart from her guilty plea, the sentence would have been 12 years.  Cooke J sentenced her and he "generously" (his word) gave her the full 1/3 credit although she had maintained her innocence during police interviews but entered a plea at a relatively early point following charge.

The Sentencing Remarks are here and merit full reading.

On the face of it, this was a case which merited a substantial period of imprisonment.  Her pregnancy was almost at full term when the baby was aborted.  The facts show clearly that she had made a deliberate choice.  She also sought to conceal the facts from others and, although she told the authorities that the body had been buried, she would not say where (see para. 5 of the sentencing remarks).

Some of the life-story of Sarah Louise Catt is revealed in the judge's sentencing remarks.  When at University she had a baby which she placed for adoption at birth.  In 2000 a baby was aborted.  In 2002 she sought a further termination but did not proceed and the baby was born.  In 2004 she had a further child.  In 2010 the offence occurred for which she was sentenced.  It appears that she was having an extra-marital affair and thought that this man was the father and she concealed the pregnancy from her husband.

The sentencing remarks inform us that there was a psychiatric report which indicated that she did not suffer from any mental disorder.  The judge did not see a need for a report from a psychologist but he does not explain why.

There is no doubting the seriousness of all of this.  The Abortion Act 1967 offered her no defence.  However, I cannot help but feel somewhat disturbed at the length of the sentence.  Was the 8 years (12 year starting point) merited entirely or is Sarah Louise Catt a woman who is more in need of help as is argued by Simon Jenkins writing in The Guardian 18th September - It's judicial machismo that jails women like Sarah Catt.

In paragraph 17 of the sentencing remarks, the judge refers to the absence of "real mitigation" and lack of remorse.  He then said - "As a matter of public policy and bearing in mind the need for deterrence, a long determinative sentence is required."  Hence, deterrence (presumably of others?) seems to have been very much in the judge's mind.

It is certainly beyond doubt that the offence was "so serious that neither a fine alone nor a community sentence could be justified" - (to use the words in the statutory sentencing framework) -  so what alternative did the judge have apart from maybe a shorter sentence of imprisonment? For example, could the sentence of imprisonment have been suspended?   The answer is not unless the imprisonment was for a term of 12 months or less - (this will become 2 years when the Legal Aid, Sentencing and Punishment of Offenders Act 2012 section 68 is implemented).  Such a short sentence would be unlikely to be viewed as commensurate with the seriousness of the offence of taking a life which might well have had its own independent existence within a matter of, at most, a few weeks.

Hence, in the absence of Catt suffering a mental illness, the learned judge appears to have been constrained by the statutory sentencing framework to a substantial sentence of imprisonment certainly in excess of 12 months.  Whether a starting point of 12 years is right is, of course, another matter. and may yet fall to be addressed in the Court of Appeal.

A further interesting comment in the sentencing remarks relates to the Abortion Act 1976.  At para. 15 Cooke J said - "There is no mitigation available by reference to the Abortion Act, whatever view one takes of its provisions which are wrongly, liberally construed in practice so as to make abortion available essentially on demand prior to 24 weeks with the approval of registered medical practitioners."

It is questionable whether the learned judge needed to say this.  The Abortion Act 1976 simply offered Catt no defence since the permitted grounds in section 1 of the Act did not apply at the time of the abortion.  Abortion is a very emotive subject with polarised opinion.  The 1967 Act (which was later amended by the Human Fertilisation and Embryology Act 1990) is Parliament's attempt to establish a balance between those who argue that abortion is (almost always) wrong and those who argue for women to have absolute freedom of choice.  The learned judge did not offer any supporting evidence for his comment about the Act being liberally construed in practice though there are certainly those who think that it is - see, for example, the article of 23rd February - "Clinics granting sex-selection abortions to be investigated by health officials."

One good thing though.  How much better it is that sentencing remarks like this are being published.  Far better than the "old days" when sentence was simply passed and the defendant taken to the cells.  At least we now have some opportunity to discover the matters which influenced the sentence.

Some excellent articles on this vexed topic are:

Daniel Sokol -  Why the Abortion Act deserves to live

Sally Sheldon - The Abortion Act's paternalism belongs to the 1960s

Amanda Bancroft - The Guardian - Does God fit in to the punishment of Sarah Cutt?

Probation blog - Psychiatrist or Psychologist - considers the difference and the importance of getting the right sort of report
Posted by ObiterJ at Wednesday, September 19, 2012