The Red White and Blue: Appeals and References 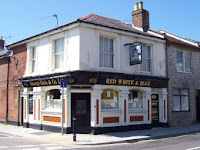 The Red White and Blue is in Portsmouth ( see here ).  Hundreds of such pubs are closing each year and many are sorely in need of trade.  The reasons for such closures need not concern us here.  Such pubs are places where people are able to congregate, "put the world to rights", perhaps have a meal or bar snack and perhaps view a Premiership Football Match on the pub's large screen or, possibly, in 3D.  To offer this facility will cost the pub a lot of money - (perhaps £1000 or more per month).  It is hardly surprising therefore that some pubs have sought cheaper ways of screening matches.  Karen Murphy is landlady of the Red White and Blue and, in 2006, she came up with the idea of using a Greek decoder as opposed to a decoder issued for use in the U.K.  In Portsmouth Magistrates' Court, she was convicted of offences under the Copyright, Design  and Patents Act 1988 s.297(1).
"A person who dishonestly receives a programme included in a broadcasting . . . service provided from a place in the United Kingdom with intent to avoid payment of any charge applicable to the reception of the programme commits an offence and is liable on summary conviction to a fine not exceeding level 5 on the standard scale."
The Football Association Premier League Ltd (the FAPL) is the marketing organisation for the Premiership.  FAPL grants licensees the
exclusive right to broadcast matches and exploit them economically within their respective broadcasting areas, generally the country in question.   Matches are broadcast in encrypted form which has to be decoded by a country-specific decoder. Given that decoders are country-specific, charges vary from country to country.  The reader will not be surprised to learn that the U.K. has one of the highest charges and Greece the lowest.
Karen Murphy appealed her conviction to the Crown Court but lost the appeal.  The Crown Court was asked to "state a case" for the opinion of the High Court.  This procedure is known as an "Appeal by way of Case Stated."  Such appeals are an aspect of the supervisory jurisdiction of the High Court and ensure that courts such as Magistrates' Courts operate within the law.  It is a procedure by which the law can be clarified.  However, if points of European Union law are raised, national courts are not the final authority on the meaning of the law.  The Treaty on the Functioning of the European Union Article 267 provides a reference procedure so that national courts can refer points to the Court of Justice of the European Union (CJEU) for a preliminary ruling.  The High Court has asked for such rulings in this case.
Art. 267 states:-

Where any such question is raised in a case pending before a court or tribunal of a Member State against whose decisions there is no judicial remedy under national law, that court or tribunal shall bring the matter before the Court.

If such a question is raised in a case pending before a court or tribunal of a Member State with regard to a person in custody, the Court of Justice of the European Union shall act with the minimum of delay."

The procedure adopted by the Court of Justice of the E.U. involves one of the Advocates-General of the Court delivering an opinion.  Such opinions are highly influential though it is possible for the court to decide the matter against the opinion.  In Mrs Murphy's case, Advocate-General Juliane Kokkot (pictured) has delivered her opinion which may be read here.   In fact, Kokott's opinion also relates to a number of cases that have come together in the Court of Justice.
Given the so-called "internal market" it is difficult to see why these charges should vary within the EU from country to country and why individual countries have to be "locked in" to a specific charge.  The Advocate-general's opinion has favoured Mrs Murphy.  Territorial exclusivity agreements are contrary to EU law - according to Kokkot.  It remains to be seen whether the Court of Justice agrees.
Article:  A useful article on this issue is "Pub Football and the future of European broadcasting" - Tony Ballard and Ben Bye - Harbottle and Lewis LLP.

Addendum 6th February 2011:  There is some well presented analysis of the commercial issues underlying this case  in "EC official's court advice in TV rights case worries Premier League" - Owen Gibson, The Guardian 3rd February.  There is no doubt that the "country-by-country" business model is enabling, for purely commercial reasons, the maximum value to be extracted from each country.
Posted by ObiterJ at Saturday, February 05, 2011