Breach of the Peace 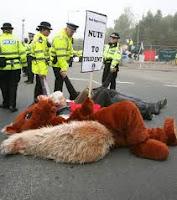 Our earliest Anglo-Saxon laws had an -ill-defined notion of "the peace" which gradually extended to a general peace applicable to the whole land.  Underlying the idea of "the Peace" was the notion of calm and absence of wrongdoing.

The Justices of the Peace Act 1361 refers to "Keeping the Peace."  The Courts Act 2003 created a single "Commission of the Peace" for England and Wales.  Justices of the Peace (JP) are members of the community appointed to discharge the functions of the Magistrates' Courts and other duties given to them by law.  Those functions are also discharged by a cadre of professionally-qualified District Judges (Magistrates' Courts) and, occasionally, other judges.

It is not a criminal offence to breach the peace but, at common law, there is a power of arrest.  The arrested individual can then be taken before the Magistrates' Court and, if the breach is admitted or proved, the individual can be "bound over" to keep the peace for a specified period of time.  In domestic law, Binding over is a civil process but the criminal standard of proof applies - see CPS Binding Over.  A sum of money - known as a recognisance - is fixed at the time of binding over and either the whole or part of the recognisance can be forfeited in the event of another breach of the peace within the specified period.


"Breach of the peace"

So, what conduct constitutes a breach of the peace?  We need delve back no further that the judgment of Lord Bingham of Cornhill in R (Laporte) v  Chief Constable of Gloucestershire [2006] UKHL 55 where the House of Lords approved the definition given in R v Howell 1982.  Lord Bingham said -

The legal concept of a breach of the peace, although much used, was for many years understood as a term of broad but somewhat indeterminate meaning. In R v Howell (Errol) [1982] QB 416 the Court of Appeal heard detailed argument on the meaning of the expression, an issue raised by the facts of the case. The court concluded that the essence of the concept was to be found in violence or threatened violence. It ruled (at p 427):

"We are emboldened to say that there is a breach of the peace whenever harm is actually done or is likely to be done to a person or in his presence to his property or a person is in fear of being so harmed through an assault, an affray, a riot, unlawful assembly or other disturbance. It is for this breach of the peace when done in his presence or the reasonable apprehension of it taking place that a constable, or anyone else, may arrest an offender without warrant." [My emphasis].

In R (Hicks) v Commissioner of Police for the Metropolis [2017] UKSC 9, Lord Toulson (giving the court's judgment) noted at para 4 - "The power of the police, or any other citizen, to carry out an arrest to prevent an imminent breach of the peace is ancient, but it remains as relevant today as in times past. The leading domestic authorities on the subject are the decisions of the House of Lords in Albert v Lavin [1982] AC 546 and R (Laporte) v Chief Constable of Gloucestershire Constabulary [2007] 2 AC 105. There are important safeguards for the citizen, in order to prevent breach of the peace powers from becoming “a recipe for officious and unjustified intervention in other people’s affairs” (in Lord Rodger’s words in Laporte, at para 62). The essence of a breach of the peace is violence. The power to arrest to prevent a breach of the peace which has not yet occurred is confined to a situation in which the person making the arrest reasonably believes that a breach of the peace is likely to occur in the near future (quoting again from Lord Rodger in Laporte, at para 62). And even where that is so, there may be other ways of preventing its occurrence than by making an arrest; there is only a power of arrest if it is a necessary and proportionate response to the risk."

Those two cases appear to define breach of the peace comprehensively.  The power to prevent future breaches needs to be exercised with care.  Lord Toulson's view about "the near future" is crucial as is the point that the arrest must be "necessary and proportionate to the risk."

Each year there are numerous arrests for "breach of the peace."  It is a moot point whether they all measure up to the requirements set out in the case law.

In Laporte, Lord Bingham noted that at para 28:

In Steel and Others v United Kingdom (1998) 28 EHRR 603, the five applicants had all been arrested for breach of the peace and contended, as one of the grounds of their applications to the authorities in Strasbourg, that breach of the peace was too ill-defined a concept to meet the requirement that the ground of their arrest be "prescribed by law" within the meaning of article 10(2) of the European Convention. This complaint was successfully repelled by the British Government. The Commission (pp 627-628, paras 146-148) considered that the concept had been defined by the passage in R v Howell quoted above. The court, also citing that passage (p 610, para 25), considered that the concept had been clarified by the English courts over the past two decades, and now had a meaning which was sufficiently established (p 637, para 55). The accuracy of this definition has been generally accepted, and was not in issue before the House. A breach of the peace is not, as such, a criminal offence, but founds an application to bind over.

In exercising their powers, the Police are a public authority for the purposes of the Human Rights Act 1998 and it is unlawful for them to act incompatibly with Convention Rights - section 6. Convention rights include Freedom of thought, conscience and religion (Art 9), Freedom of Expression (Art 10) and Freedom of Assembly and Association (Art 11).

Most of the Convention rights are not absolute rights. So, for example, there is no right to simply say anything one wishes.  Article 10.2 states - "The exercise of these freedoms, since it carries with it duties and responsibilities, may be subject to such formalities, conditions, restrictions or penalties as are prescribed by law and are necessary in a democratic society, in the interests of national security, territorial integrity or public safety, for the prevention of disorder or crime, for the protection of health or morals, for the protection of the reputation or rights of others, for preventing the disclosure of information received in confidence, or for maintaining the authority and impartiality of the judiciary.

Is Breach of the Peace necessary in modern times?

A considerable number of breaches of the peace could be charged as criminal offences - e.g. under the Public Order Act 1986 section 5 - A person is guilty of an offence if he - (a) uses threatening or abusive words or behaviour, or disorderly behaviour, or (b) displays any writing, sign or other visible representation which is threatening or abusive, within the hearing or sight of a person likely to be caused harassment, alarm or distress thereby.

In 1983 the Law Commission reviewed public order offences and noted that the Public Order Act 1936 section 5 referred to likelihood of words or behaviour occasioning a breach of the peace.  In defining new offences, the Commission considered it to be preferable to avoid definitions that referred to breach of the peace.  See Law Commission LC 123 (October 1983) at para 5.14 - Criminal Law: Offences relating to public order

The value of breach of the peace seems to lie more in prevention of trouble or further trouble.  It permits intervention when the person making the arrest reasonably believes that a breach of the peace is likely to occur in the near future.  Similarly, a binding over to keep the peace is intended to dissuade the individual from engaging in similar conduct during the period of the bind over.

It is interesting that Lord Mance sat in both Laporte and in Hicks.  He became Deputy President of the Supreme Court of the UK in September 2017 and retired, at age 75, on 6th June 2018.  See the Valedictory for Lord Mance - 6th June 2018.