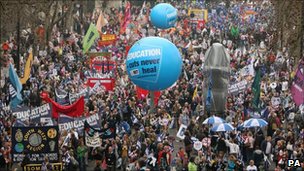 Following a massive and mainly peaceful protest in London on Saturday 26th March (see The Independent 28th March), the government has stated that it is to review Police Powers - see Home Office "Protest: we will review Police Powers."  In excess of 250,000 people from many parts of the country joined in the protest.  Regrettably, the political impact which the protest may have had has been blunted by the unlawful conduct of some - (Cuts protest violence: 149 charged - The Guardian 28th March).  The Home Secretary - Mrs Theresa May - said:  'I am willing to consider the introduction of an order to ban known hooligans from attending rallies and marches, as happens for people found guilty of football-related violence ... I will look into the powers the police have to force the removal of face coverings and balaclavas.  If the police need more help to do their work, I will not hesitate in granting it to them.'  This may not necessarily be a bad thing if it enables genuine peaceful protest to take place.


The Guardian 28th March
has highlighted a situation which arose at Fortnum and Mason in London - "Cuts Protesters claim Police tricked them into mass arrest" - there is video of the event as part of the article which raises some disturbing questions.


Despite the depth of the cuts and other economic bad news, the electorate do not appear to be calling for a general election to be held.  Nevertheless, it is interesting to speculate as to what the position might be if the Fixed Term Parliaments Bill becomes law given that one of the "safety valves" which an angry electorate has in a democracy is the ability to press for a general election.  The Bill will fix the date of next election at 7th May 2015 and adopt fixed 5 year terms (despite the fact that few Parliaments in recent times have lasted a full 5 years).  Under the Bill, an early election can be brought about by (a) loss of a motion of no confidence or (b) the passing by the Commons (by a two thirds majority) of a motion for an early election.  See Fixed Term Parliaments Bill ... more constitutional tinkering.  Law and Lawyers is not a political blog and the general desirability of fixed term parliaments is a massive political question which appears to have been given little attention in the media currently dominated by events in Japan, Libya and elsewhere.  Nevertheless, one has to wonder whether restricting the "safety valve" is a wise thing to do or even the right thing to do in a democratic nation.

Whilst on the subject of protest, note the decision in Mayor of London v Brian Haw and others [2011] EWHC 585 (QB) which is discussed in some detail on the UK Human Rights Blog.  There is little doubt that the authorities want an end to this protest in Parliament Square Gardens.   The High Court held that it was not a breach of Article 10 (Freedom of Expression) or of Article 11 (Freedom of assembly) to grant a possession order relating to the gardens.  However, Wyn Williams J pointed out that the case was NOT about whether the camp on the pavement may continue.  The pavement is controlled by Westminster Council who are seeking an injunction against the continuance of that element of the protest.

Addendum 30th March:  The Guardian looked at the UK Uncut arrests outside the Fortnum and Mason shop and the subsequent charges for "aggravated trespass"  for which those arrested are now on bail.  (The article does not refer to the conditions (if any) applicable to that bail).
Posted by ObiterJ at Monday, March 28, 2011