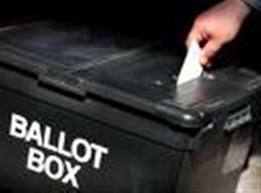 The Parliamentary Voting System and Constituencies Act 2011 (PVSCA) received Royal Assent on 16th February 2011 and things are gearing up for a referendum on 5th May 2011 to answer the following question which is set down in the Act - (note: there is also a Welsh version):
'At present, the UK uses the 'first past the post' system to elect MPs to the House of Commons. Should the 'alternative vote' system be used instead?'
Some of the background:
Alternative Vote is used for Parliamentary elections in Australia, Papua New Guinea and Fiji.

The referendum question itself was subject to a considerable degree of analysis (see Electoral Commission Report).  Clearly the question presupposes that the voter understands what "Alternative Vote" is; what the claimed advantages and disadvantages are and how it will be applied in practice.  These matters are far from simple though one thing is very clear: "Alternative Vote" (or AV) is NOT a proportional representation (PR)  system.  Political opinion is very divided on the issue but a commitment to a referendum appeared in the Coalition Agreement (Para 24 refers) thrashed out shortly after the 2010 General Election.   The Electoral Commission must take whatever steps they think appropriate to promote public awareness about the referendum and how to vote in it and they may take whatever steps they think appropriate to provide, for persons entitled to vote in the referendum, information about each of the two voting systems referred to in the referendum question.
The question of turnout:
The Commission also has a duty to publish the most accurate estimate that it is reasonably possible to make of the turnout of voters in each of England, Wales, Scotland and Northern Ireland.  (See Schedule 1 of the PVSCA at para.9).  During the passage of the Bill through Parliament an attempt was made to subject the referendum to a minimum turnout requirement but this was ultimately rejected.   A number of other elections - (for local government, the Northern Ireland and Welsh Assemblies and the Scottish Parliament) - are to be held on 5th May and these will, in practice, have a bearing on the turnout.
The PVSCA 2011 - overview
The Act is aimed at achieving two objectives: (a) enabling the referendum about AV and (b) reducing to 600 the number of Parliamentary constituencies.  If there is a “yes” vote in the referendum the alternative vote provisions must be brought into force on the same day as the coming into force of an Order in Council giving effect to the Boundary Commissions' recommendations for altering the parliamentary constituencies.
PVSCA Part 1 deals with the referendum (section 1) and who may vote in it (s.2) - i.e. those entitled to vote in parliamentary elections and this does not include serving prisoners.  It is likely that there may be legal challenge on this point.   Section 8 deals with the coming into force (if "yes" vote) or the repeal (if "no" vote) of what are referred to as the "alternative vote provisions" which are set out in section 9 read with Schedule 10 and with Schedule 12 Part 1.  The "alternative vote provisions" are helpfully summarised in the Explanatory Notes to the Act.

PVSCA Part 2 deals with the 600 constituency proposal.  A reduction in the number of MPs will no doubt save some money but will reduce the accessibility of the constituency MP to many in the electorate and may have an adverse impact on the ability of the House of Commons to hold overactive Ministers to account.  Article: The Guardian 4th March 2011.
How AV is to be applied - (alternative vote provisions):
The "alternative vote provisions" are very detailed and address matters such as "tied candidates" and how a decision to eliminate a candidate is to be made in that event.  See Schedule 10 Part 1 para.7 for the detail.

Some links of interest:   The Electoral Commission has published a considerable amount of information.   The former Parliamentary Draftsman Francis Bennion has placed on Youtube  his personal view of AV (worth a look).  The Guardian has a graphical illustration of how it operates.   An amusing illustration - (also on Youtube )  - shows a swimming team selecting their swimwear for the next season.  This is not an entirely accurate representation of how AV would operate in practice because, in the illustration, there are effectively successive ballots.  The lawyer, legal writer and blogger David Allen Green has published - "A Liberal case against the AV."    The London School of Economics and Political Science has several interesting articles including - "Is AV a better voting system?  It depends ..."

If AV is adopted, it is likely to be with us for a very long time to come.  As things stand, it is not possible to estimate with any reasonable degree of certainty the outcome and it would be an almost pointless exercise attempting to do this for the present constituencies given that the Act seeks to reduce their number in time for the next general election (2015?).  The referendum is therefore of very far reaching importance.

“AV opens the door to a new political world in which coalitions become the norm, and single-party majority government a distant memory. Defeat for AV could quickly end the coalition. But success would bind it together – for a long time to come.” - Vernon Bogdanor
Blogpost on Law and Lawyers when the Bill was introduced.
The serious student may wish to read House of Commons Briefing Paper 10/55 dated 1st September 2010.

Addendum 1st April
Multiplicity of Voting Systems in the UK

The proposed system of AV will, if introduced, be unique in the UK.  The Scottish Parliament, the National Assembly for Wales and the Northern Ireland Assembly are all now dissolved and will be re-elected on 5th May.   In a Scottish Parliament election, each voter has 2 votes.  One is used to elect a constituency MSP (and this operates on a first past the post basis) and the second vote is for a political party , or for a candidate standing as an individual, within a larger electoral area known as a region.  73 MSPs represent constituencies and 56 are Regional MSPs.   A similar system is used for elections to the National Assembly of Wales (here).  Elections to the Northern Ireland Assembly are done by a Single Transferable Vote (STV) system - explained here.   The London Mayor election uses yet another system known as Supplementary Vote - see here.  Voters choose up to a maximum of two candidates and put them in order of preference.  Whilst this is similar to AV, there can only be a maximum of two counts to determine the winner.