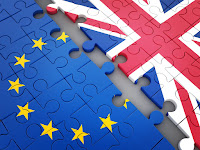 The 8th Round of negotiations between the UK and the EU concluded on 10 September though talks between officials will continue over the coming days. As shown by the statement of the EU's chief negotiator (Michel Barnier) major differences between the two sides continue to exist. The UK's negotiator (Lord Frost) issued a brief statement stating - "We remain committed to working hard to reach agreement by the middle of October, as the Prime Minister set out earlier this week. We have agreed to meet again, as planned, in Brussels next week to continue discussions.”

Without question, the United Kingdom
Internal Market Bill - discussed in this previous post 10 September - cast a long shadow over Round 8 of the talks. The Bill seeks to give UK Ministers powers to make Regulations which, in certain areas, could breach the UK-EU withdrawal agreement.

The Joint Committee met in an "extraordinary meeting" on 10 September - see the UK government's report on the meeting and the more strongly worded statement from the EU Commission.  The Commission was clear that the draft Bill would be in clear breach of substantive provisions of the Northern Ireland Protocol and states the UK would be in violation of the good faith obligation under the withdrawal agreement. The EU did not accept that the aim of the Bill is to protect the Good Friday (Belfast) Agreement and stated that - In fact, it is of the view that it does the opposite."

Vice-President Maroš Šefčovič called on the UK government to withdraw these measures from the draft Bill in the shortest time possible and in any case by the end of the month. He stated that by putting forward this Bill, the UK has seriously damaged trust between the EU and the UK. It is now up to the UK government to re-establish that trust.  He reminded the UK government that the Withdrawal Agreement contains a number of mechanisms and legal remedies to address violations of the legal obligations contained in the text – which the European Union will not be shy in using.

Other reaction to the Internal Market Bill came from Nancy Pelosi (Speaker of the USA House of Representatives) who said bluntly that the U.K. can forget about Congressional approval for a free-trade deal with the U.S. if Britain’s withdrawal from the European Union imperils an agreement that ended conflict in Northern Ireland - Bloomberg News 9 September.

A short debate (Rule of Law) took place in the House of Lords - Hansard 10 September.  This included a speech by former Conservative Party Leader Michael Howard who said - "My Lords, does my noble and learned friend simply not understand the damage done to our reputation for probity and respect for the rule of law by those five words uttered by his ministerial colleague, in another place, on Tuesday— words that I never thought I would hear from a British Minister, far less a Conservative Minister? How can we reproach Russia, China or Iran when their conduct falls below internationally accepted standards, when we are showing such scant regard for our treaty obligations?"

The statement begins by saying that - "The purpose of the Bill is to promote the continued functioning of the internal market in the UK after the conclusion of the transition period provided for in the Withdrawal Agreement and the European Union (Withdrawal) Act 2018."

The Bill also provides for how aspects of the Northern Ireland Protocol to the Withdrawal Agreement apply in the UK’s domestic law. In particular it ensures that the government will be able to deliver its commitments to protect peace in Northern Ireland and the Belfast/Good Friday Agreement, and to strengthen and maintain the UK internal market.

Clauses 42 and 43 of the Bill give HMG the power to make regulations to (i) disapply or modify the application of any exit procedures that would otherwise be applicable to goods moving from Northern Ireland to Great Britain, and (ii) make regulations setting out how the provisions of the Northern Ireland Protocol on State aid are to be given effect for the purposes of domestic law.

The clauses provide that these powers may be exercised in a way that is incompatible with provisions of the Withdrawal Agreement. Clause 45 of the Bill expressly provides that these clauses, and any regulations made under them, have effect notwithstanding any international or domestic law with which they may be incompatible or inconsistent.

The effect is to disapply the EU law concept of ‘direct effect’. This is the case regardless of whether any regulations made under clause 42 or 43 of the Bill are in fact incompatible with the Withdrawal Agreement.

It is an established principle of international law that a state is obliged to discharge its treaty obligations in good faith. This is, and will remain, the key principle in informing the UK’s approach to international relations. However, in the difficult and highly exceptional circumstances in which we find ourselves, it is important to remember the fundamental principle of Parliamentary sovereignty.

Parliament is sovereign as a matter of domestic law and can pass legislation which is in breach of the UK’s Treaty obligations. Parliament would not be acting unconstitutionally in enacting such legislation.

This ‘dualist’approach is shared by other, similar legal systems such as Canada, Australia and New Zealand.

Under this approach, treaty obligations only become binding to the extent that they are enshrined in domestic legislation.

This principle was recently approved unanimously by the Supreme Court in R (Miller) v Secretary of State for Exiting the European Union [2017] UKSC 5.

Issue has to be taken with the sentence - "Under this approach, treaty obligations only become binding to the extent that they are enshrined in domestic legislation."

It is correct to say that a treaty binds the UK in international law but does not automatically have legal effects within the UK's legal systems. That is the "dualist approach" to treaties. It is for Parliament to take legislative action to give effect in domestic law to treaties and Parliament has done this many times - notably, for EU membership, when enacting the European Communities Act 1972.

The UK government's  Ministerial Code refers to the overarching duty on Ministers to comply with the law. The Code was amended in 2015 and a specific reference to international law was removed but in R (Gulf Centre for Human Rights) v Prime Minister [2018] EWCA Civ 1855 it was confirmed that no substantive change was intended when the code was amended.

Over matters to do with Brexit there is a stubborness bordering on stupdity in Downing Street. It remains to be seen whether either the government amends the Internal Market Bill or MPs are able to secure amendments to it. The Bill's second reading is scheduled for Monday 14 September.

Letter to the Lord Chancellor from the House of Lords Select Committee on the Constitution - 11 September 2020.