Confusion abounds ~ is a "gathering" in a pub garden in Barnard Castle permitted? 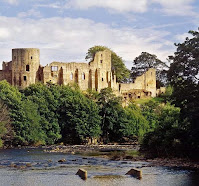 On Tuesday 29 September, the Prime Minister, on a visit to Exeter, was asked to clarify whether people from two  households in the north east of England were allowed to meet in a pub garden. He gave an unclear answer. This story is covered by Camilla Tominey in The Telegraph 29 September - "Boris Johnson Covid rules confusion reflect the palpable sense of chaos at Number 10" Later in the day, Johnson issued a statement to correct the position. The Guardian 29 September also covered the same story.

Part of the problem here is that, at the time Johnson spoke on 29 September, the new Regulations were not in the public domain. The new regulations appear as an amendment to existing regulations applicable to NE England.

The amending regulations are -

England is subject to some public health regulations which apply throughout the country BUT parts of England (e.g. the NW and NE) are subject to additional restrictions. Regulations are issued with minimal notice (even to Parliament) and numerous amendments are issued using the "cut and paste" technique commonly used in statutory amendment.

The citizen has little hope of really knowing what is required by the law and the thicket of legislation is almost impenetrable even by those skilled at navigating through such dreary but nonetheless vitally important provisions.

So, is a "gathering" in a pub garden permitted in Barnard Castle?

We can start with the so-called "rule of six" which is Regulation 5 in The Health Protection (Coronavirus, Restrictions) (No. 2) (England) Regulations 2020 - (SI 2020/684). This Regulation applies throughout England. A gathering of more than 6 is not permitted  (with certain exceptions) if it takes place on or at premises, other than a private dwelling, which are - (a) operated by a business, .... etc.

The amendment to the NE of England has not altered this. The amendment prohibits (again with specified exceptions) a gathering of two or more persons in a private dwelling. Perhaps the most obvious exception to that is where all those in the gathering are from the same household or are members of two households which are linked households in relation to each other.

Further action by the government is expected ......