Scotland - a note on Johnson's rejection of Sturgeon's request

Brexit, unwanted by Scotland, is one reason why the Scottish National Party (SNP) is riding high in terms of election results regardless of consideration of their actual track-record in government.  In the 2019 general election, the party obtained 48 of the 59 Scottish seats at Westminster and currently appears to be on course for an outright win in the Scottish Parliamentary election to be held in 2021.

Scotland’s First Minister
(Nicola Sturgeon) sought an order under section 30 of the Scotland Act 1998 so that an independence referendum could be held in 2020. The newly-elected Prime Minister (Boris Johnson) has refused. 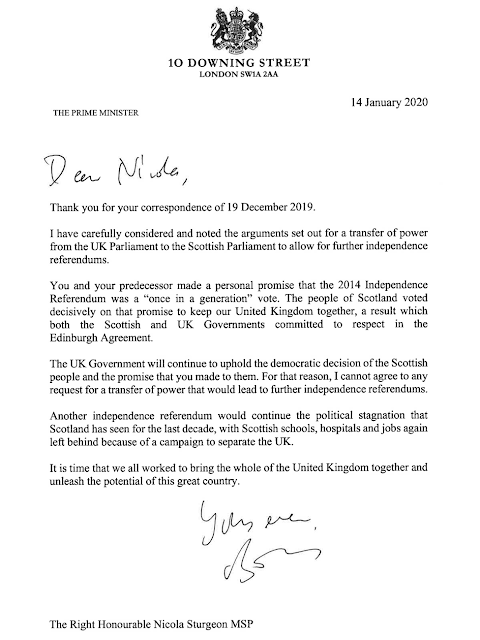 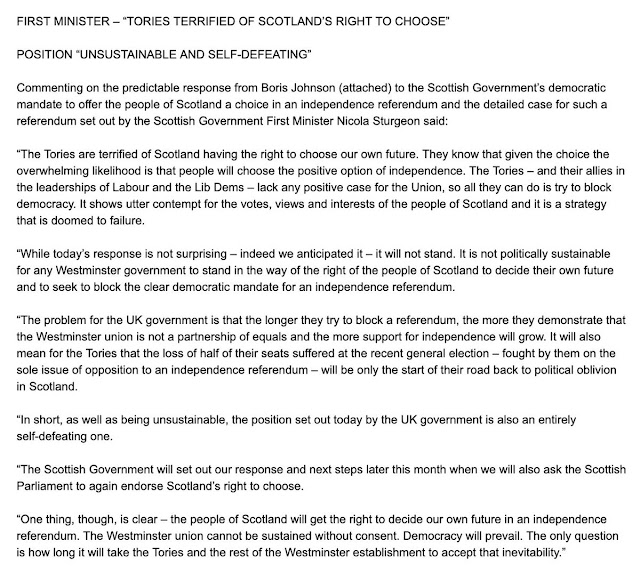 The battle lines are therefore drawn between the Scottish Government and the Conservative UK government. The SNP will undoubtedly campaign for independence together with rejoining the EU and a win in 2021 on such a manifesto would place them in a strong political position to press their case for independence.

Johnson points to a promise which he says Sturgeon (and her predecessor - Alex Salmond) made that the 2014 referendum was to be a once in a generation vote but it is likely to be politically futile to trawl over the various statements made by politicians in advance of the 2014 referendum. Any such comments were not set into law and the Edinburgh Agreement of 2012 is silent on whether there could ever be a subsequent referendum on the same subject.

The UK government would be unwise to seek to rely on their unionist policy to simply oppose independence. They will have to work to make Scottish independence an unattractive proposition for the Scottish people and, given Brexit, that is likely to be a mountain to climb.  As the Financial Times commented prior to the 2019 election - “The task remains ... for a future UK government to reform the Union — undoubtedly strained, even before Brexit — so that its component nations again see it as enriching their political and civic life.”


The following material may be of use to those wishing to delve into this topic further.

: A timeline for the independence question :

January 2013 - Cameron said, as long ago as January 2013, that the 2015 Conservative Party General Election manifesto would seek a mandate to renegotiate the UK's relationship with the EU (with the Single Market at its heart) and then to hold an "in-out" referendum in the first half of the next Parliament.

In 2013, the Scottish government published a White Paper -Scotland's Future - Your guide to an independent Scotland in which it was stated that the referendum was a "once in a generation opportunity to follow a different path, and choose a new and better direction for our nation."

An order under section 30 of the Scotland Act 1998 enabled the Scottish Parliament to enact the legislation necessary to hold the referendum - the Scottish Independence Referendum Act 2013.

Scottish Parliament - Proceedings on the Scottish Independence Referendum Bill - the bill was introduced by Nicola Sturgeon MSP on 21 March 2013 and received Royal Assent on 17 December 2013.

6 May 2016 - Scottish Parliament election - The SNP's 2016 Scottish elections manifesto claimed that the Scottish Parliament should have the right to hold another referendum if there is "clear and sustained evidence" that independence has become the preferred option of a majority of the Scottish people - or if there is a "significant and material" change in circumstances, such as Scotland being taken out of the EU against its will" - see BBC News 20 April 2016.

In their 2017 General Election manifesto ("Stronger for Scotland"), the SNP argued for an independence referendum "at the end of the Brexit process, when the final terms of the deal are known."

The outcome of the 2017 general election was a Conservative minority government led by Prime Minister Theresa May - BBC 2017 General Election results.

In the 2019 General Election, the SNP won 48 of the 59 Scottish seats at Westminster -BBC News Election 2019. Elections to the UK Parliament are held on the First Past the Post system. Voters must be aged 18 or over. Furthermore, EU nationals in the UK may not vote in a general election.

The SNP manifesto for the 2019 election claimed that the Scottish government held a clear mandate to deliver a new independence referendum and went on to state - "To ensure that a referendum is put beyond any legal challenge, before the end of the year, we will demand that the UK Government transfers the necessary powers under the Scotland Act to ensure the decisions about the referendum can be taken by the Scottish Parliament."


: Links to other reading :

Why be against Scottish Independence

Bloomberg 1 September 2019 - Scottish Independence is Back, and So Are the Financial Hurdles

Institute for Government December 2019 - A second referendum on Scottish independence

Democratic Audit 15 January 2020 - Battle of the mandate: defining the dispute over a new Scottish independence referendum

Business for Scotland - January 2020 - What now that Boris has said No to a Scottish Independence Referendum?