With just over a week remaining of the UK's EU membership, the Brexit process is entering its final throes. Brexit will have been achieved but little else given that the future (post-2020) relationship of the UK with the EU has yet to be negotiated.

The UK leaves the EU by operation
of Article 50 of the Treaty on European Union and not, as stated in some media reports, because of the 2020 Act. Parliament enacted the European Union (Notification of Withdrawal) Act 2017 and thereby authorised the Prime Minister to give the notice required by Article 50 of the UK's intention to leave. Notice was given on 29 March 2017.

Arrangements between the UK from the States in the European Economic Area (EEA) and the European Free Trade Area (EFTA) are covered by a separate agreement - UK government 28 January.

The EU (Withdrawal Agreement) Bill began its life in the House of Commons where the government majority ensured that all proposed amendments were defeated.

Full details of the Bill and links to the parliamentary proceedings are available HERE. Previous posts about the Bill are at 23 December 2019 and 10 January 2020.

The amendments passed by the Lords are discussed in a House of Commons Library document published on 21 January.

At EU level, finalisation of the Withdrawal Agreement requires the consent of the European Parliament and that is followed by the European Council "concluding" the Agreement on behalf of the the EU.

The EU Parliament will vote on 29 January and consent to the Agreement requires a simply majority.

On Thursday 23 January, the EU Parliament's Constitutional Affairs Committee recommended that the Parliament gives its consent. The Committee's meeting may be viewed via the EU Parliament TV service and this document issued by the Committee is worth reading in full for its discussion of the process leading to the Withdrawal Agreement and the steps taken to improve the agreement - Draft recommendation - withdrawal agreement UK-EU

If the European Parliament consents to the Agreement, the European Council will formally conclude the Agreement on 31 January.  A reinforced qualified majority applies and requires at least 72 % of the participating Member States – 20 of the 27 – to be in favour and those States must represent at least 65% of the EU population.

The UK government must ratify the agreement. Ratification defines the international act whereby a state indicates its consent to be bound to a treaty. Some legal steps required for ratification by the UK were included in section 13 of the European Union (Withdrawal) Act 2018 but these have been repealed and therefore no longer apply. The 2020 Act also disapplies the requirements of the Constitutional Reform and Governance Act 2010. The UK government is therefore in a position to ratify the Agreement.

The Secretary General of the EU Council - (see Art 183 of the Withdrawal Agreement) - is designated as the "depositary" and, in that capacity, will receive written notification from both parties stating that all necessary internal procedures have been completed - (Art 185 WA).

Once the UK has left the EU on 31 January (at 2300 hrs GMT) the immediate future will be governed by the Withdrawal Agreement which makes the remainder of 2020 a transition (or, as the UK government prefers, implementation) period. The Agreement contains provision to extend the transition period (Article 132) but the 2020 Act prevents Ministers agreeing in the Joint Committee to any such extension. In any event, the right to extend the transition period has to be exercised before 1 July 2020 and only one extension (of either 1 or 2 years) is permitted.

Negotiations on trade and other matters will take place with a view to achieving a treaty (or treaties) governing the relationship beyond 2020.

The legal road to Brexit:

1] Accession - On 22 January 1972, at the Egmont Palace in Brussels, Prime Minister Edward Heath signed the Treaty of Accession taking the United Kingdom into the European Communities with effect from 1 January 1973.  Denmark and Ireland also acceded to the communities at the same time.  Norway had participated in the accession negotiations but did not join as a result of an adverse national referendum.  Norway also rejected membership in 1994.


2] The European Communities Act 1972 gave legal authority for EU law to have effect in the  national legal systems of the UK. The European Union (Withdrawal) Act 2018 section 1 repeals the 1972 Act. However, the Withdrawal Agreement Act 2020 provides that the 1972 Act, as it has effect in domestic law or the law of a relevant territory immediately before exit day, continues to have effect in domestic law for the duration of the implementation period.

3] Treaty of European Union - Article 50 - This provides the mechanism by which a member State leaves the EU whether with or without a withdrawal agreement. 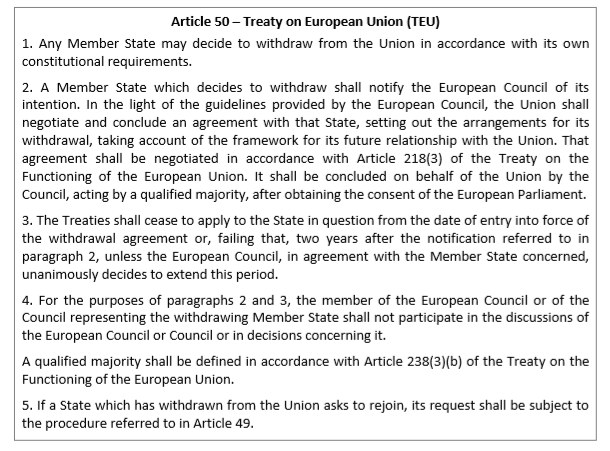 
Article 50 of the Treaty on European Union


4] European Union (Referendum) Act 2015 - this was the Act which enabled the 2016 referendum to take place. The referendum was sometimes referred to as "advisory" because the Act did not place a legal obligation on the UK government to implement Brexit but, politically, there were numerous statements that the referendum result would be implemented - e.g. David Cameron February 2016. Furthermore, the Act did not require a majority in each of the four nations forming the UK and Scotland and Northern Ireland voted to Remain in the EU. A simple majority of the overall number of votes cast was sufficient.

5] European Union (Notification of Withdrawal) Act 2017 - this Act was passed to permit the Prime Minister to give notice to the European Union that the UK had decided to leave.  There was disagreement among lawyers as to whether the government could use the prerogative power relating to treaties to give the notice under Article 50 TEU. In the event, the Supreme Court, by a majority of 8 to 3, held that the giving of the notice had to be authorised by Act of Parliament.  The court's judgment is R (Miller and another) v Secretary of State for Exiting the EU [2017] UKSC 5.

6] European Union (Withdrawal) Act 2018 (as enacted) - makes legal provision for the UK leaving the EU. In brief, the Act makes provision for legal continuity once the UK leaves the EU. See this Institute for Government explainer.

Using the extensive powers under the 2018 Act, numerous statutory instruments have been made.  The 2020 Act contains further powers to make subordinate legislation.

Looking beyond 2020, the future relationship with the EU is uncertain. The EU has yet to finalise its own negotiating guidelines and therefore trade talks may not start until March 2020 - The New European 20 January.  The UK government has yet to make its own negotiating objectives known although it is being urged to do so - Institute of Directors 21 January.

The President of the EU Commission (Ursula von der Leyen) indicated during her visit to London that the question of divergence from EU rules and standards will be a crucial factor in such talks.  Von der Leyen's speech, entitled "Old friends, new beginnings: building another future for the EU-UK partnership" may be viewed via the EU Commission Audiovisual Service.

Brexit will also continue to test the unity of the UK. The Scottish Independence issue is not going to disappear  and may be appearing more attractive to Scottish voters given that Scotland has opposed Brexit from the outset. The Withdrawal Agreement keeps the Ireland - Northern Ireland border open but, in essence, creates a de facto customs and regulatory border down the Irish Sea - World Politics Review 13 January.

Brexit occurs on 31 January but it is therefore a "blind Brexit" with no clarity about what may happen after 2020.