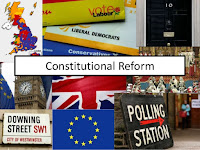 It is to be hoped that we are not about to witness the "topping out" ceremony in the construction of the elective dictatorship .....

The Queen's Speech included creation of a "Constitution, Democracy and Rights Commission" (CDRC). Work will also be taken forward to repeal the Fixed-term Parliaments Act.  The Speech may be read via the No 10 Downing Street website and is accompanied by Briefing Notes (151 pages pdf). Both proposals were included in the Conservative Party's general election manifesto (previous post).  Unlike the proposal
for a Royal Commission to examine the efficiency and effectiveness of criminal justice, the CDRC will not be a Royal Commission  (previous post). The terms of reference and membership of the proposed CDRC have yet to be announced.

It is clear from the Queen's Speech briefing notes that the creation of CDRC will have far-reaching constitutional consequences. There can be little doubt that the government will only be interested in CDRC recommendations if they will lead to an even stronger role for the executive and a corresponding diminution in the roles of Parliament and the judiciary. That appears to be the trajectory of constitutional reform in the UK for the duration of the present government. 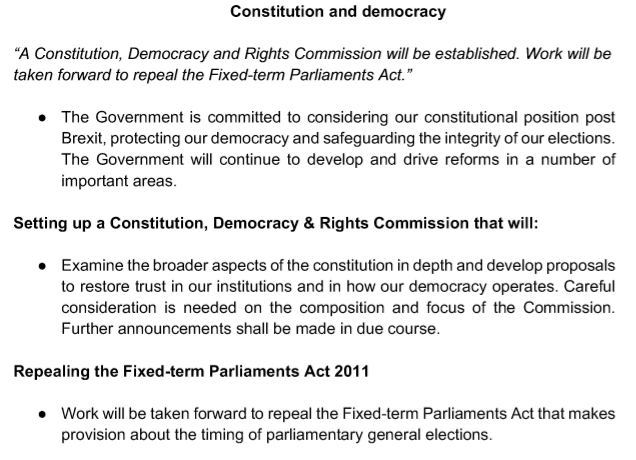 Politically-speaking, the proposal to create a CDRC appears to be motivated by recent events including the House of Commons taking control of the Order Paper and proceeding with legislation that was unwanted by the government - i.e. the EU (Withdrawal) (No 2) Act.  The Act required the Prime Minister to seek an extension to EU membership and thereby avoided a damaging "no deal" Brexit at the end of October 2019.  The Act was considered in this previous post.

During 2019, Ministerial irritation was noticeable regarding matters such as the Supreme Court's unanimous judgment in the prorogation case where the court held that Prime Minister Johnson's purported prorogation of Parliament for around 5 weeks was unlawful and void - Cherry / Miller 2 [2019] UKSC 41. On the basis of dicta by Lord Roskill in the GCHQ case, it was widely thought by lawyers that "Royal Prerogative" decisions relating to matters such as dissolution and prorogation of Parliament were non-justiciable. Nevertheless, since the 17th century, it has been established law that the courts had power to decide whether a claimed prerogative power existed and, if so, its extent.

The Cherry / Miller 2 decision led to comments such as that in Spiked Online which asserted that the decision was "a vile assault on the democratic order." There were calls to limit the scope of judicial review and for more political involvement in appointments to the senior judiciary. Before the Labour government's 2005 constitutional reforms, the Lord Chancellor held all the cards regarding judicial appointments. The 2005 reforms also created the Supreme Court of the UK to replace the Appellate Committee of the House of Lords. The House of Lords Constitution Committee's 5th report of 2005-6 considered the 2005 reforms and is still worth reading.

The terms of reference and membership of the CDRC will require critical examination once the government makes an announcement. This will be an area where the political leanings of those appointed will be open to scrutiny.

It appears that the Commission will have a broad remit to make proposals relating to all three of the interlinked areas mentioned - the Constitution, Democracy, and Rights.  At this stage, sensible forecasts could be made as to the areas the Commission is likely to examine but I am not attempting a comprehensive list in this post.

Powers in relation to Parliament (prorogation and dissolution), the constitutional position of the Supreme Court, judicial review, and human rights protection will all be candidates to figure in any list. The more likely areas for inclusion will be those where the government sees obstacles to the exercise of executive power.

It is highly likely that the Commission will be inundated with "advice" as to what it should recommend and some material has already appeared - see below.

Once the Commission reports, the government will be able to pick and choose the recommendations that it wishes to progress further.

Repeal of the Fixed-term Parliaments Act is a separate commitment in the Queen's Speech and this proposal is likely to have a degree of cross-party support if election manifestos are a guide. The key issue here is what will replace it.

The FTPA is not entirely without merit. (1) the Act makes it clear when the next general election must be held.  (2) Dissolution of Parliament is no longer at the discretion of the Prime Minister who, in the past, could (and often did) use the power of dissolution for partisan advantage. Under the Act, the House of Commons has a central role in deciding whether an early parliamentary election will be held.

The Act provides for two scenarios in which an early parliamentary election can be triggered - (a) the Commons votes for an election (at least two-thirds to be in favour) or (b) the Commons passes a vote of no confidence in the government and neither that government, nor any alternative, can win a vote of confidence within 14 days. Such a confidence vote must be in the form specified in the Act.

There is already a considerable literature on the Act - e.g.


The question of replacing the Act was discussed by Robert Craig in the Modern Law Review May 2018 (£).

Replacement of the Act may prove to be contentious and difficult and it is a topic to which we must undoubtedly return. The House of Commons would do well to ensure that it continues to have a role in deciding when elections will be called rather than returning decisions about dissolution and general elections to the Prime Minister.

In March 2011 Prime Minister David Cameron set up a Commission on a Bill of Rights. The Commission membership mostly comprised leading counsel (QC rank) and it reported in December 2012. The report was considered in some detail in this previous post.  A majority of the Commission believed that, on balance, there was a strong argument for a UK Bill of Rights but there was a notable dissent by Helena Kennedy QC and Phillipe Sands QC who argued that the time was not ripe to conclude that the focus should be on a new Bill of Rights.  The majority had failed to identify or declare any shortcomings with the Human Rights Act or its application by our courts.

In recent times, principally due to Brexit, the future of protection for human rights in the UK has been in the political long grass but, as a result of the 2019 general election, it will come back to the forefront. Much will depend on the eventual recommendations of the proposed Commission.  The future of the Human Rights Act 1998 will be raised and that begs the question of what (if anything) will replace it.  Among some politicians there is an intense dislike of 'foreign courts' which they see as 'interfering' in the affairs of the UK - see e.g. The Guardian 22 December 2013.  It is not beyond possibility that the government might even withdraw the UK from the European Convention on Human Rights - e.g. The Guardian 25 April 2016.

Already a number of articles have appeared containing proposals for constitutional and rights reforms.


"The rise of judicial power in the UK in recent years is a striking change in our constitutional arrangements – in how we are governed – a change that threatens good government, parliamentary democracy, and the rule of law. The expansion of judicial power is a function both of Parliament’s decision to confer new powers on courts, most notably by enacting the Human Rights Act 1998, and of the changing ways in which many judges, lawyers and scholars now understand the idea of judicial power. Prof Richard Ekins argues that Parliament is responsible for maintaining the balance of the constitution and should restate limits on judicial power, restoring the political constitution and the common law tradition."

Writing in The Critic (January 2020), Joshua Rozenberg has argued that another Constitutional Reform Act is required - see Judging the Judges -


"The government — and parliament — must agree in advance on the courts’ ability to limit prerogative powers. In other countries, such an agreement would form part of a written constitution. But codifying the UK’s uncodified constitution would be an endless task. The way forward is clear: we need another Constitutional Reform Act."


A third article is by Martin Howe QC - Restoring the Constitution.  Mr Howe was a member of the Commission on a Bill of Rights (2011-12) and in his recent article he proposes a Restoration of the Constitution Bill. This is a wide-ranging article in which Howe proposes (inter alia) repeal of the Fixed-term Parliaments Act, suggests legislation to permit the government to advise the Queen to refuse Royal Assent to a Bill which the government disagrees with, attacks the Supreme Court judgment in the prorogation case, states that it was wrong to set up an "all-singing all-dancing" Supreme Court, and argues for restoration of the central role of the Lord Chancellor 'as a judicial as well as a political figure' and in judicial appointments.

At the start of 2020, I wish that I could be more optimistic about the future of our constitutional arrangements. Constitutional Reform is capable of affecting lives of everyone within the UK no matter who they voted for.  Cases for reform needs to be evidence-based, well-considered, and not rushed through an over-busy Parliament.

It is to be hoped that we are not about to witness the "topping out" ceremony in the construction of the elective dictatorship about which the late Lord Hailsham (1907-2001) warned in his Richard Dimbleby lecture as long ago as 1976. The portents are there for those who wish to see them.