The first nation to mark the New Year was the Republic of Kiribati located in the Pacific Ocean. The last place, also in the Pacific Ocean, was American Samoa.  The International Date Line divides the two places. 2020 will be the year of transition from full UK membership of the EU to whatever new arrangements are put in place for 2021 onwards.  Parliament will be a busy place as the government's programme, set out in the Queen's Speech, is rolled out.

The Speech may be read via the No 10 Downing Street website and is accompanied by Briefing Notes (151 pages pdf). This post looks briefly at the immediate task facing Parliament in January and then considers the proposal in the Queen's Speech to set up a Royal Commission related to criminal justice.

Parliament resumes sitting
on 7 January and its first business will include enacting the European Union (Withdrawal Agreement) Bill - examined in some detail in this previous post. This will give effect in domestic law to the withdrawal agreement.  Royal Assent is expected around 23 January.

Leaving the EU entails loss of EU Citizenship for UK Citizens unless the individual also holds nationality of a State within the EU. No attempt was made by the UK government to negotiate either retention of EU citizenship or some form of Associate Citizenship for those who wished to keep it.  This issue was discussed in some detail in a House of Commons Library Briefing paper published on 6 July 2018 - Brexit and European Citizenship. See also European Parliament - The Citizens of the Union and their rights.

Apart from addressing Brexit and its consequences, the Queen's Speech (previous post) contained proposals for a Royal Commission 'to improve the efficiency and effectiveness of the criminal justice process.'


It is an inescapable fact that Conservative governments (2015-17 and 2017-19) and the Conservative-Liberal Democrat coalition (2010-15) have implemented policies which have resulted in damage to the criminal justice system. Given the history, the irony will not be lost of the Johnson government announcing that it will set up a Royal Commission related to the efficiency and effectiveness of criminal justice.

Serious restrictions on legal aid in criminal (and civil) cases were imposed; Police Forces in England and Wales have suffered severe manpower reductions; reforms to probation services are generally considered to be highly unsatisfactory.  Court closures, begun during the Lord Chancellorship of Labour's Jack Straw, have continued.  Criminal justice practitioners report under-utilisation of the available courtrooms, inefficient use of judicial manpower, and increasing trial delays.  Problems within the UK's generally crowded prisons have been highlighted in numerous Inspectorate reports.

It is somewhat pointless to speculate about either the actual terms of reference for the proposed Commission or its membership since those matters have yet to be announced but it is worth noting that the Queen's Speech refers to the 'efficiency and effectiveness of the criminal justice process.'   The Queen's Speech was accompanied by Briefing Notes which state: 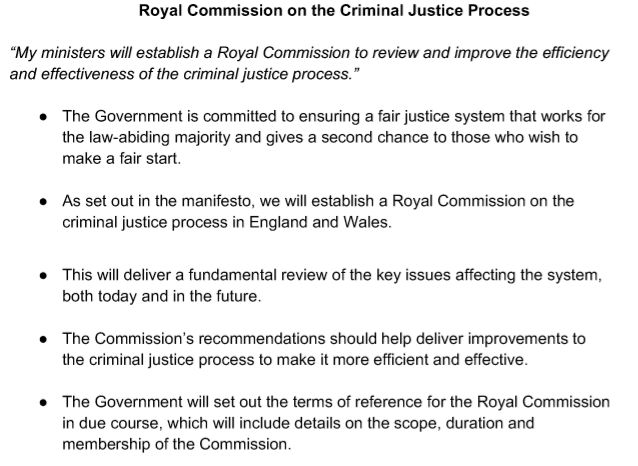 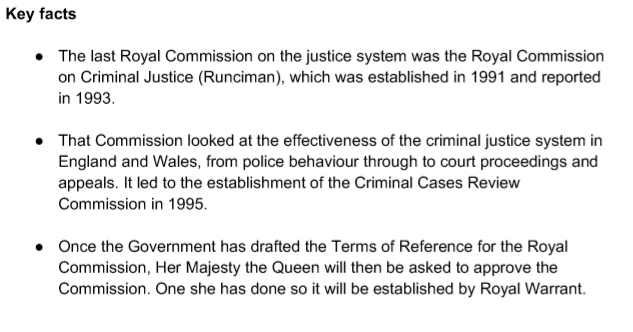 37 Royal Commissions have been created since World War 2 but only 4 have been appointed since 1976.

A Royal Commission on Assizes and Quarter Sessions was set up in 1966 and reported in 1969. That led to the Courts Act 1971 which created the Crown Court of England and Wales.

A Royal Commission on the Constitution was held from 1969 to 1973 under the chairmanship of Lord Crowther and later Lord Kilbrandon.  The report rejected the options of independence or federalism, in favour of devolved, directly elected Scottish and Welsh assemblies.

1991 - 1993 - Royal Commission on Criminal Justice (Runciman) - was set up as a response to several high profile miscarriages of justice, notably the Maguire Seven and the Birmingham Six (previous post).  It led to the creation of the Criminal Cases Review Commission.  The Commission rejected abolition or change to the "Right to Silence" but changes were made during Michael Howard's time as Home Secretary - Criminal Justice and Public Order Act 1994 sections 34 to 39.

1999 - 2000 - Royal Commission on Reform of the House of Lords (Wakeham). Details of the Report "A House for the Future" are available HERE. The report has gathered dust for 20 years!

These powers do not have statutory backing and Hansard reveals questions in Parliament about the powers of Royal Commissions - e.g. see this exchange in the House of Lords on 4 November 1975.  By way of contrast, Australia has had legislation about Royal Commissions since 1902.

The title Royal Commission does not give a Commission report any special legal status. Recommendations are made which may be either accepted by government or simply rejected.  Alternatively, recommendations may be accepted in part and could be implemented with changes.

The Queen's Speech also referred to setting up a Constitution, Democracy and Rights Commission 'to consider the relationship between Government, Parliament and the courts and to explore whether the checks and balances in our constitution are working for everyone.' I will turn to that in a later post.