On 4 November 2019, by secret ballots of MPs, Sir Lindsay Hoyle was elected Speaker of the House of Commons - Parliament 4 November.  He is the 158th individual to occupy the office.

Mr Kenneth Clarke MP (Father of the House) presided over the election which took from 2.30 pm to about 8.20 pm.  The final ballot
was between Sir Lindsay Hoyle and Mr Chris Bryant.  Sir Lindsay secured 325 votes to Mr Bryant's 213.  Subsequently, a ceremony of "Royal Approbation" was held in the House of Lords chamber. 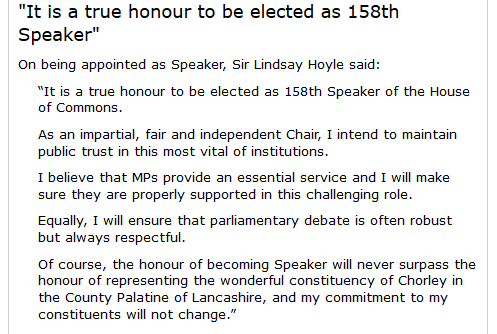 The House of Commons considered the remaining stages of the Historical Institutional Abuse (Northern Ireland) Bill and the Bill subsequently received Royal Assent.

A Valedictory Debate took place in the Commons.  This debate enabled Members who are not standing again to make short valedictory speeches.

The House of Commons considered an Urgent Question concerning the government not publishing a report prepared by the Intelligence and Security Committee.  See Hansard 5 November 2019 . In the House of Lords there was a Statement about the report - see Hansard House of Lords 5 November.

The House of Lords approved regulations to enable opposite sex couples to enter into civil partnerships - Civil Partnership (Opposite-sex Couples) Regulations 2019.  See Hansard House of Lords 5 November.  The regulations had already passed the House of Commons.  In 2018, the Supreme Court decided Steinfeld Keidan [2018] UKSC 32 where it was held that sections 1 and 3 of Civil Partnership Act 2004 (to the extent that they preclude a different sex couple from entering into a civil partnership) are incompatible with article 14 of ECHR taken in conjunction with article 8 of the Convention.

The Civil Partnerships, Marriages and Deaths (Registration etc.) Act 2019 enables the Secretary of State, by regulations, to amend the eligibility criteria for civil partnerships and to make other appropriate and consequential provision.

Parliament dissolved at midnight. The dissolution ended the shortest parliamentary session since October 1948.  The Commons met for only 19 days since the state opening on 14 October.

The timetable for elections is set out in law; in the Parliamentary Elections Rules in Schedule 1 of the Representation of the People Act 1983.

Proclamation for a new Parliament:

The Privy Council met on 6 November. The following Proclamation issued - 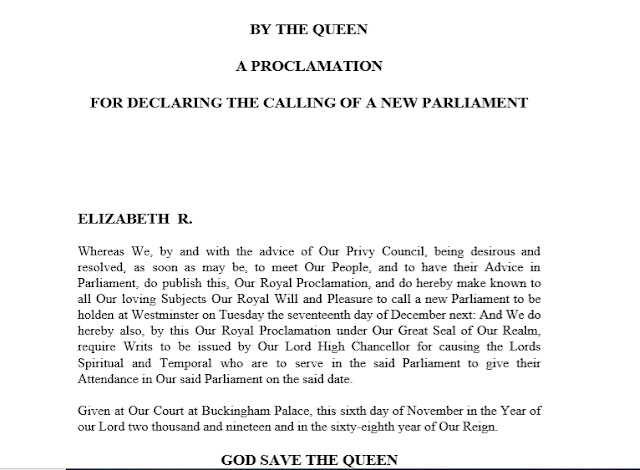 On 17 December 2019, Sir Lindsay Hoyle was again elected Speaker of the House of Commons. This was the first sitting of the newly elected Commons.