The Withdrawal Agreement (WA) will,
if implemented, create various committees referred to as (a) the Joint Committee and (b) Specialised Committees. These proposals appear to have received only minimal attention but they are an important element in the WA. This post looks at the Joint Committee created by Art 164: 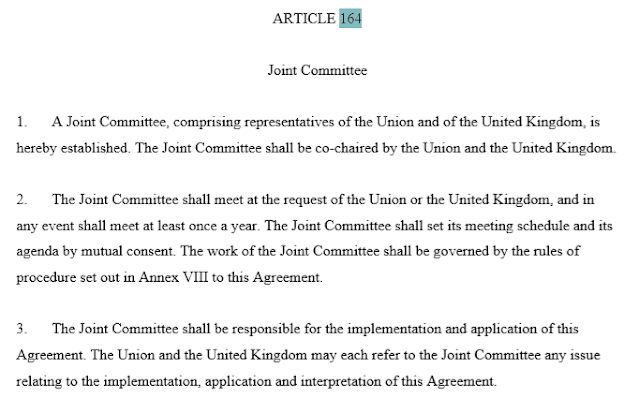 It seems, at least to me, to be inconceivable that the JC will meet only once a year. Frequent meetings will undoubtedly be required given that the JC is 'responsible for the implementation and application' of the agreement.  Issues are bound to arise and could be referred to the JC by either the EU or the UK.

Annex VIII contains 14 rules governing the operation of the JC and the Annex provides that most of the rules will also apply, with any necessary changes (mutatis mutandis), to the Specialised Committees.

The JC will have co-chairs provided by the EU Commission and the UK government ad there will be a Secretariat.  The (now defunct) EU (Withdrawal Agreement) provided - Clause 35 - that the UK's co-chair was to be exercised personally by a Minister of the Crown:

Delegations attending meetings can vary from one meeting to the next depending on subject-matter on the agenda and experts could be called upon to advise. Meetings will take place alternately between Brussels and London.

Rule 10 provides that meetings of the JC are confidential but the confidentiality may be waived by the co-chairs. 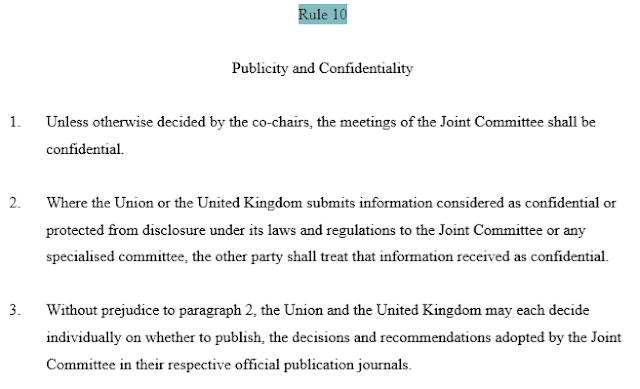 Role of the JC:

Article 164(4) states what the JC is required to do and Art 164(5) states additional items that the JC may do. 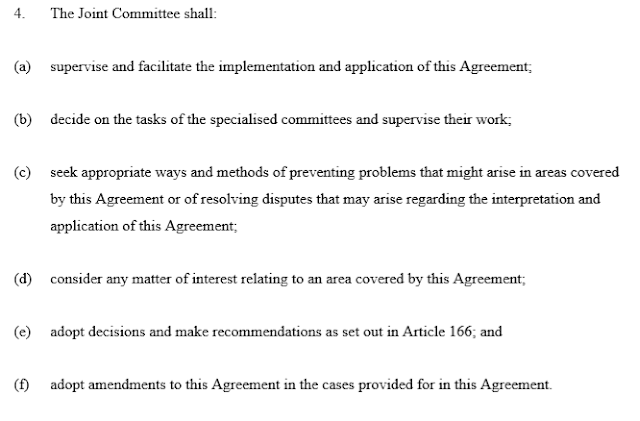 In particular, two points are of particular importance in Art 164(4). - 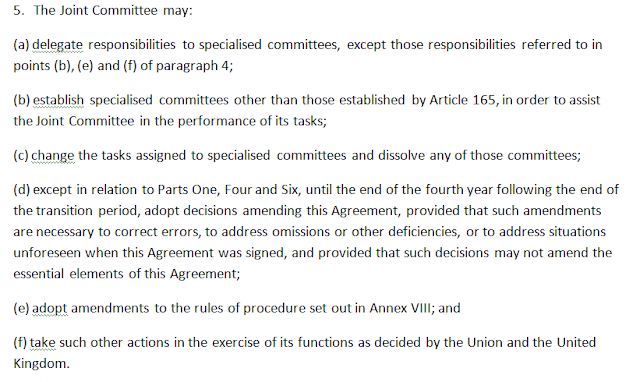 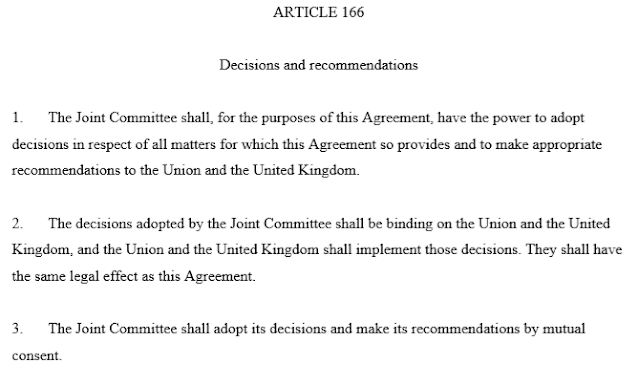 Art 166(2) is key - The JC will be a uniquely powerful and influential body. Decisions adopted by the Joint Committee would be binding on the EU and the UK and would have the same legal effect as the Withdrawal Agreement.

A Withdrawal Agreement Implementation Bill will be required to give legal effect to the WA in the UK's domestic legal systems. Such a Bill was introduced but did not proceed and, due to the dissolution of Parliament, is now defunct.  A similar (possibly identical) Bill will be required in the event that the government formed after the 2019 general election is still minded to pursue Brexit.

The JC has not escaped the notice of Parliamentary committees. In December 2018 the EU Committee reported on the identical provisions in the earlier withdrawal agreement and made recommendations in its 24th Report of Session 2017-19  about the lack of Parliamentary oversight and the fact that the JC will not operate in an open and transparent way.

The committee commented - 'While the international agreement establishing the terms of the UK’s withdrawal from the EU may not be the appropriate place to include provisions relating to the role of the UK Parliament, Members of both Houses may wish to consider the appropriate level of, and structure for, parliamentary oversight of the Joint Committee, and seek undertakings from the Government on this question.'


The provisions relating to dispute resolution in the Withdrawal Agreement retain a limited role for the CJEU. This role is, however, attenuated when compared with that envisaged in the March 2018 draft text. Notably, the inclusion of an arbitration mechanism, with input from the CJEU only in circumstances where questions of Union law arise, moves toward the Government’s goal of ending the direct jurisdiction of the CJEU, while still respecting the autonomy of the European Union’s legal order and the role of the CJEU. Nonetheless, it is possible that concerns may arise if a decision of the CJEU were effectively to determine a dispute between the parties.
Posted by ObiterJ at Saturday, November 16, 2019