A December General election ~ the Speaker ~ Dissolution of Parliament

It has been an interesting week! An extension of UK membership of the European Union (EU) was secured. The Prime Minister's motion under the Fixed-term Parliaments Act 2011 to hold an early general election failed to secure the required two-thirds majority in the House of Commons. A Bill was then introduced to legislate for a general election on 12 December 2019. The Bill received Royal Assent on 31 October and became the Early Parliamentary General Election Act 2019 (EPGEA).  See this previous post.

The 1910 election was the last to be held over several days - 3 to 19 December.  The 1918 election - the so-called "coupon election" - was held on 14 December 1918 after the Armistice (11 November 1918) and was the first election in which women over 30 and all men over 21 could vote. The 1923 election (6 December) brought about the first, albeit minority, Labour government under Ramsay MacDonald - Wikipedia 1923 General Election.  A further general election was held on 29 October 1924 following a successful Vote of No Confidence in MacDonald's government - 1924 General Election.


* The Background is Brexit *

Brexit provides the backdrop to the election. On Monday 28 October, following his unsuccessful attempt to use the Fixed-term Parliaments Act to bring about a general election, the Prime Minister said: 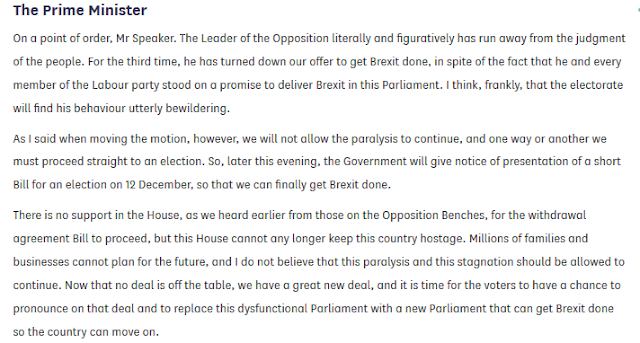 The need for the election was therefore presented as the key to getting "Brexit done" and getting the withdrawal agreement (previous post) accepted by a new Parliament. Mr Johnson's description of the withdrawal agreement as "a great new deal" is questionable but the alternatives are either to leave the EU without any deal or to revoke the Article 50 notification and remain a member of the EU.

I am not making any forecast as to the outcome of the election but it will not necessarily make Brexit a simpler process since many issues come into play during election campaigns - e.g. NHS, Law and Order, Education, Climate change, Scottish Independence etc - and a further hung Parliament cannot be ruled out.  Professor Chris Grey has commented on his blog that it is "perfectly conceivable that, just as happened before, we are no further forward. An indecisive election, followed by the Christmas Recess, would leave us with just two or three weeks of the extension period left, and a no-deal Brexit looming yet again."

Chris Grey also argues that "we are, finally, at the point we should have been at before the whole process started: with a definition of what Brexit means in practice, to be compared with remaining in the EU."

That requires detailed analysis of the deal and honest explanation to the voters of the consequences.  It is probably unlikely that such a process will take place amid the noise of a general election campaign whereas a Referendum campaign would have put the spotlight on the actual deal.  However, there was insufficient political will in Parliament to legislate for a further referendum even though there has been a public campaign to secure one.

Business on Monday 4 November is to elect a new Speaker.  The Father of the House - Kenneth Clarke MP - will act as Presiding Member for the purposes of the election.

The Speaker-Elect then makes a short speech and this is followed by speeches from party leaders. The conclusion of the process is the Queen’s Royal Approbation, which is signified in the House of Lords.  The Speaker returns to the House of Commons to report that the Queen has signified her approval.

Once approved, the Speaker lays claim, on behalf of the Commons, ‘by humble petition to Her Majesty, to all their ancient and undoubted rights and privileges’ (see paras 12.3–12.7 ), which being confirmed, the Speaker, with the Commons, retires from the Bar of the House of Lords.

By the Ministerial and other Salaries Act 1975, s 1(3) it is provided that in the case of a dissolution the then Speaker shall be deemed to be the Speaker, for the purposes of that Act, until a Speaker has been chosen by the new Parliament.

The forthcoming general election will require the Dissolution of Parliament.  The House of Commons Library explains the process.  Parliament will need to dissolve on Wednesday 6 November 2019 for polling day to be Thursday 12 December. Dissolution occurs just after midnight at the start of the day.

In the period immediately before an election or referendum there are restrictions on the use of public resources and activities of civil servants. This pre-election period is also known as the ‘period of sensitivity’ and has often been referred to as ‘purdah’.

During a general election Ministers remain in office and in charge of their departments but it is customary for them to observe discretion in announcing initiatives that are new or of a long-term character in their capacity as a minister. It does not prevent ministers from campaigning on their party manifesto in their role as politicians seeking election.

The general principle for ministers, as outlined in the Ministerial Code of Conduct, is that departmental resources and facilities are provided at Government expense to enable them to carry out their official duties. These facilities should not generally be used for party or constituency activities.

The pre-election period before general elections is not regulated by statute, but governed by conventions based largely on the Civil Service Code. The Cabinet Office issues guidance for civil servants in UK government departments, and the staff and members of non-departmental public bodies (NDPBs) and other arm’s length bodies (ALBs) on their role and conduct during election and referendum campaigns. This is available on the Cabinet Office website.

The Institute for Government has looked at the impact of Dissolution - What happens when Parliament is dissolved?  All seats in the House of Commons become vacant - there are no longer any serving MPs but Ministers remain in post.   All unfinished parliamentary business falls - including Bills that have not received Royal Assent.  Unlike a prorogation, Bills may not be carried over to the next Parliament.  The Withdrawal Agreement Bill - currently in limbo - will therefore fall but could be reintroduced in the next Parliament - see UK Constitution Association - The Constitution Committee reports on the EU (Withdrawal Agreement) Bill.

To prevent unfinished parliamentary business falling, governments have usually tried to complete as much unfinished business as possible in the time between an election being called and Parliament being dissolved – known as the ‘wash-up’ period.  Given the need to elect a Speaker it is not yet clear to what extent there will be any "wash up" prior to this dissolution.


The committee reports that current UK electoral law poses serious and unnecessary risks for everybody involved. Candidates, agents, parties, administrators and voters must navigate a thicket of complicated and sometimes contradictory legislation ahead of the December election.

An interim report published by the Law Commission in 2016 made recommendations designed to consolidate electoral law and make it fit for purpose, but to date little progress has been made – prompting PACAC’s inquiry. The Law Commission is due to publish its full report in 2020, and PACAC urges the Government to make this the basis for future reforms.

In its report, PACAC underlines the urgent need to simplify, update and consolidate current legislation, and with the country set to go to the polls in December, its conclusions should be treated as a priority by whoever forms the next Government.

Further criticism of Parliamentary elections is the use of the First Past the Post System which has enabled governments to be formed which have only had a minority of the votes cast in the election.  In the 2017-19 Parliament the Conservatives and DUP shared a majority of seats with just 43% of the votes.

Institute for Government - Brexit with links to Explainers of the Withdrawal Agreement Bill and the Brexit deal.

History of Parliament blog 4 November - The election of a Speaker