Brexit Party and the Constitution

Reform of the constitution has not escaped the attention of politicians. This post takes a brief look at some of the proposals put forward by the Brexit Party.  The party is actually The Brexit Party Ltd . It was incorporated as a company in November 2018, registered by the Electoral Commission as a political party on 5 February 2019, and contested seats in the 2019 European Parliamentary Elections winning 29 seats - previous post. At the 12 December General Election the party is to contest 275 seats.

The party has published
a "Contract with the People" and prefers not to use the word manifesto. It is claimed that there is a need for "fundamental democratic reforms to fix our broken political system and make Parliament serve the People."

Further pledges are to reform the voting system to make it more representative, abolish the unelected House of Lords, make MPs who switch parties subject to recall petitions, and to overhaul the postal voting system to combat fraud and abuse.

The contract also includes reform of the Supreme Court - " - judges who play a role in politics must be subject to political scrutiny. Ensure political balance by broadening participation in the Selection Commission or conduct interviews by Parliamentary Committee."

In March 2012, the House of Lords Constitution Committee reported on Judicial Appointments - 25th Report dated 7 March 2012. The committee concluded against pre-appointment hearings because such hearings could not have any meaningful impact without undermining the independence of those subsequently appointed. "In the United Kingdom, Judges' legitimacy depends on their independent status and appointment on merit, not on any democratic mandate" - (para 205 in the report).

(The more detailed discussion about appointment hearings is at paras 39-48 in the report - HERE).

The 2012 Report is unlikely to be the final say on this issue. In the aftermath of the Supreme Court judgment in Cherry / Miller 2 [2019] UKSC 41 the House of Commons held a debate in which the following exchange took place: 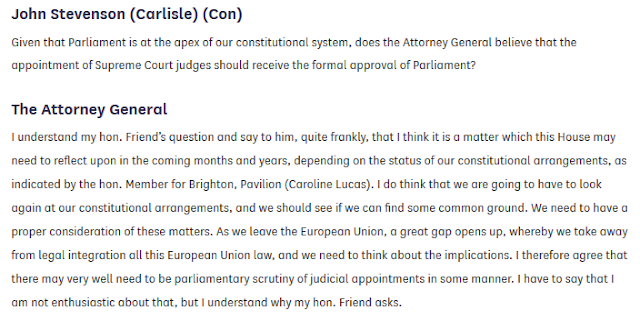 The Supreme Court of the UK (UKSC) assumed the role, previously exercised by the Appellate Committee of the House of Lords, as the UK's highest court. In that capacity the court decides appeals on matters which inevitably have political consequences but that does not make it a political court. There is a growing tendency to refer to the UKSC as a "constitutional court" but such terminology increases the risk that its Justices will eventually become subject to some form of political vetting which could, of course, vary according to the prevailing politics of the day.  See, for example, The Guardian 26 September 2019.

The independence of the judiciary is crucial in a democracy. Any proposal to increase the power of politicians in relation to judicial appointments must be anxiously scrutinised. Perhaps it is a road to be avoided altogether.