On 28 November 2019, in the Crown Court at Preston (Openshaw J and a jury), former Chief Superintendent David Godfrey Duckenfield was acquitted of the gross negligence manslaughter of 95 people who died as a result of the events at Hillsborough Stadium, Sheffield on 15 April 1989.

Ch. Supt Duckenfield was the senior Police Officer - "Match Commander" - at Hillsborough Stadium on the day of the match between Liverpool and Nottingham Forest.  The acquittal of Mr Duckenfield was by a jury of 10 and the verdict was a majority of 9 to 1. - Statement by the CPS 28 November 2019.

The law of gross negligence manslaughter is set out in detail on the CPS website.

A 96th victim
was Anthony David Bland who died on 3 March 1993.  Mr Duckenfield could not be charged with a homicide offence in relation to Mr Bland because of the "year and a day rule"  by which, for the purposes of offences involving death and of suicide, an act or omission was conclusively presumed not to have caused a person’s death if more than a year and a day elapsed before he died.   The law relating to that rule was amended by the Law Reform (Year and a Day Rule) Act 1996 but the legislation does not have retrospective effect.

In December 2012, the High Court ordered new inquests which, in April 2016,  determined that those who died in the disaster were unlawfully killed - The Guardian 26 April 2016.   However, the criminal trial has acquitted Mr Duckenfield.  This can be explained by the separate purposes of Inquests and Criminal Trials.

An Inquest is held by a Coroner who sometimes sits with a jury. It is public judicial process to find the answers to a limited but important set of questions:
The 'how' question is usually the main focus of the inquest.  The Coroner cannot, in law, deal with any other matters. Basically, it is a fact-finding process and does not deal with issues of blame or responsibility for the death, or with issues of criminal or civil liability.  These can be addressed in other courts if necessary.

A criminal trial is to decide criminal liability in relation to the offence(s) with which a defendant is charged. The only successful criminal prosecution in relation to Hillsborough was that of Mr Graham Mackrell - CPS 13 May 2019.  Mr  Mackrell, a former Sheffield Wednesday club Secretary, was sentenced to a fine of £6,500 and costs of £5,000 for an offence under Health and Safety legislation. He was accused of failing to take reasonable care to ensure that the turnstile allocation and ticketing arrangements for the Leppings Lane end of the Hillsborough stadium did not result in large crowds building up.

On 17 April 1989 Lord Justice Taylor (later Lord Chief Justice) was appointed to hold an inquiry. The inquiry was completed by 14 July 1989 and an Interim Report was published in August 1989.   Lord Taylor's terms of reference were - "To inquire into the events at Sheffield Wednesday football ground on 15 April 1989 and to make recommendations about the needs of crowd control and safety at sports events."

It is at paras 66-70 of the interim report where Lord Taylor commented about the decision to Open the Gates.  This is worth quoting in full:

66. Between 2.40 pm and 2.45 pm the crowd inside and outside the turnstile approach had swelled to over 5,000. At the head of the phalanx conditions had become intolerable. Those who got through were short of breath and sweating profusely. Many complained to police officers on the concourse inside the turnstiles and asked them in forceful terms to do something. Exit gates A and B were being shaken. It was clear the crowd could not pass through the turnstiles by 3 pm. Police Constable Buxton radioed from the Landrover to control asking that kick-off be postponed. The suggestion was acknowledged but rejected.

67. Superintendent Marshall realised the crowd had become unmanageable. Although loth to do so, since it was contrary to basic police strategy, he decided to request the exit gates be opened to relieve the pressure. Otherwise, he feared fatalities would occur. Other senior officers outside the ground agreed. At 2.47 pm he radioed control to permit the gates to be opened. At 2.48 pm, whilst Mr Duckenfield was considering the request, gate C opened to eject a youth who had climbed in with no ticket. Immediately, fans outside took advantage and about 150 managed to get in before a mounted officer enabled the gate to be closed again. Mr Marshall repeated his request. Still no response from control. He repeated it a third time, adding that if the gates were not opened someone was going to be killed. In the control room, Mr Duckenfield had not made a decision. Mr Murray asked him "Are you going to open the gates?". Mr Duckenfield gave the order and Sgt Goddard radioed to Mr Marshall "Open the gates". Neither the Club control room nor any police officers inside the turnstiles were told of this order before or after it was given or of any action it would require.

68. At 2.52 pm, gate C was opened wide. Fans behind turnstiles A to G and from the concourse beyond came round to flow through it in large numbers.

69. About two minutes later the pressure outside gate A led Sgt Higgins to radio, despite the gateman's objection, for it to be opened. If it was not, he said, "It'll go and someone will get killed". Permission was given, but this time reserve serials were alerted to monitor the inrush towards the north stand. Gate B was also briefly opened against the gateman's wishes and about 200 of those pressed at turnstiles A to G gained entry to their left.

70. The largest entry, however, was through gate C. In the five minutes it was open about 2,000 fans passed through it steadily at a fast walk. Some may have had tickets for the stands. No doubt some had no tickets at all. The majority had tickets for the .terraces. Of these, some found their way either right to pens 1 and 2 or left through the dividing wall to 6 and 7. But a large proportion headed straight for the tunnel in front of them.


Clearly, when Mr Duckenfield made his "heat of the moment" decision regarding the gates, he was responsing to requests from other officers who had said that opening the gates was necessary to prevent casualties.  Once the gates were opened, fans were able to proceed via a central tunnel to the terraces and that caused the severe pressure within the crowd. A fence around the edge of the playing pitch prevented easy access by spectators to the pitch.

Mr Duckenfield has now been cleared of criminal responsibility but it seems worthy of note that, in the immediate aftermath of the tragedy, he gave a misleading account.  According to this report in The Guardian 11 October 2019, the retrial was informed that Mr Duckenfield told FA Officials that “a gate had been forced and there had been an inrush of Liverpool supporters that had caused casualties. What he did not say was that he had given an order to open the gates,” said Richard Matthews QC, opening the case for the prosecution.

This is borne out by Lord Justice Taylor's Interim Report which, at paragraph 98, noted: 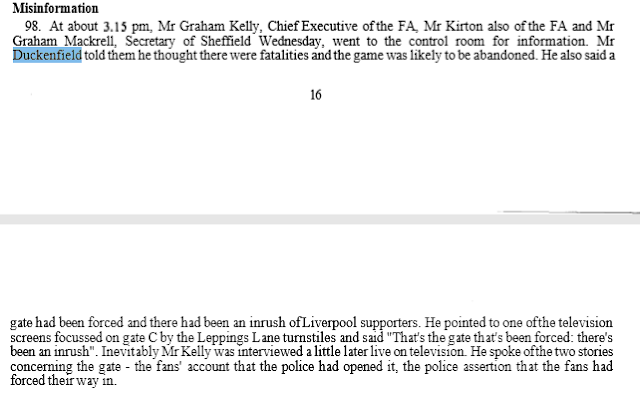 Lord Taylor's findings went much further - (see Interim report paras 273 to 285).  Taylor criticised the 1989 Operational Order which "left much unsaid" (para 273), senior officers were found to be "defensive and evasive" (para 280), South Yorkshire Police was not prepared to concede that they were in any respect at fault for what occurred (para 285) though Lord Taylor noted that Duckenfield had apologised for blaming the Liverpool fans for causing the deaths. A link to the interim report is below.

The Anthony Bland case left a legal legacy relating to withdrawal of end of life medical treatment though it is now necessary to consider later cases and, in particular, the UK Supreme Court judgment in An NHS Trust v Y [2018] UKSC 46.

Hillsborough has also left its mark on the law of tort in relation to claims brought by individuals who have witnessed a traumatic event but it cannot said that the law is particularly satisfactory and claims will be difficult to pursue. The courts have intoduced various "control mechanisms" to limit the number of claims that can be considered.  See Law Commission - Liability for Psychiatric Illness.

The BBC 3 December 2019 reported that the mayors of Liverpool and Greater Manchester have written to the three main party leaders strongly criticising the legal system following the acquittal of the Hillsborough match commander, David Duckenfield, on a charge of manslaughter.


In April 2009 after being heckled at the 20th anniversary of the Hillsborough disaster Burnham used the next day's cabinet meeting in Downing Street to ask then Prime Minister Gordon Brown if he could raise the issue of Hillsborough in Parliament. Brown agreed despite it not being on the government's agenda.  See Law and Lawyers 17 October 2011 and Hansard 17 October 2011.

A public authority (accountability) bill was introduced to Parliament by Mr Burnham but it was discontinued with the 2017 dissolution of Parliament. It would have placed a "duty of candour" on public authorities such as the police, fire brigade and local authorities. The Bill also sought to provide bereaved families with funding for legal representation equal to that of those public authorities.