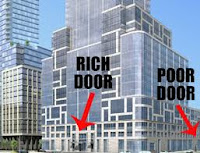 Yesterday, via Twitter, I came across a post on the "Now That's What I call History" blog of Dr Lucy Robinson - Persons Unknown.  The blog highlights the forthcoming appearance, at Stratford Magistrates' Court, of Lisa Mckenzie.  Dr Robinson wrote:


Lisa Mckenzie, whose book Getting By, is compulsory reading on our first year History course and whose methodology has inspired much of my recent work, has been summoned to Stratford Magistrates Court to defend herself against three charges relating to the Poor Door Protests in April 2015.  She was arrested on 1 account of criminal damage and later charged with 2 counts of public order offences.  Since then the Crown has been unable to gather evidence directly linking her to these offences.  They have instead shifted to a charge of ‘Joint Enterprise with Persons Unknown’.  In Lisa’s words ‘this means that I can be charged and held responsible for any actions that persons unknown have engaged in…The Police plan to issue me with a Criminal behaviour order on conviction which will limit my freedom of speech and movement for 5 years.’


Lisa Mckenzie works as a research fellow at London School of Economics (LSE).  Her webpage states:

" ..... my current research interests especially relate to the precarious nature of particular groups in our society and the vulnerability they experience through insecure housing, work, social benefits, health care, and education."

Mckenzie stood as a Parliamentary candidate for Chingford and Woodford Green in the 2015 General Election.  She fought the election campaign as a "Class War" candidate and achieved just 53 votes.  Iain Duncan Smith was returned as MP with 20,999 votes and he is now Secretary of State for Work and Pensions.  This blog is not the place to analyse his policies but it suffices to say that they are politically controversial and considered by many to be particularly detrimental to already vulnerable individuals.  McKenzie's LSE webpage describes her role and goes on to say - "In addition to my academic work at the LSE I am a political and social activist engaging with local community protests, and campaigns ....."  McKenzie also has a page on The Guardian website.

Beyond the information in the Lucy Robinson blog, we have no details of the charges against Mckenzie.  Dr Robinson's post points to two topics of legal interest - (a) Criminal Behaviour Orders and (b) Joint Enterprise.

Hence, conviction for a criminal offence is a pre-requisite to the making of a CBO and the clear aim of an order is to prevent the individual causing further harassment, alarm or distress to any person.

It is the COURT that decides whether to impose an order but may only do so on the application of the prosecution.  (The Police may request a prosecutor to apply but the prosecutor ought to exercise his own judgment).   A CBO may only be imposed in addition to a sentence imposed for the offence, or, an order discharging the offender conditionally.


Whether we are seeing here the use of the CBO as a method of preventing an individual from engaging in active protest remains to be seen.

If the court decides to issue a CBO it would have to be for a minimum of 2 years in the case of an adult offender.  The maximum is 5 years.


"There has been considerable public concern about the use of Joint Enterprise in cases of assault and homicide.  In 2011 the House of Commons Justice Select committee called for immediate and urgent ‘guidance on the use of the doctrine when charging. In particular, we would welcome guidance on the relationship between association and complicity’.

We are awaiting - but not holding breath - for Parliament to act on that Select Committee report.  However, important cases are to be heard in the near future by the UK Supreme Court and the Judicial Committee of the Privy Council - see previous post of 14th October.  This may clarify some aspects of "joint enterprise."

Joint enterprise liability can apply to any offence but the more controversial convictions have arisen in murder cases.  In an article for Criminal Law and Justice Weekly (Joint Enterprise Murder - 12th March 2015), Felicity Gerry QC wrote:

(i) Two people at the same time about to commit the same crime as the same moment, so, for example, two people intend to kill the same person, and they both have weapons which they use against the victim at the same time. That victim dies from both of those wounds. In that case they are both murderers and therefore principal offenders. They have both committed to the victim’s death and with an intention to do so. They have acted on a joint enterprise. Here, the concept of joint enterprise is uncontroversial.

(ii) The second situation would be when one person commits murder as a principal offender but someone else either assists that murder intending to assist or encourage the murder. For example, if one person supplies a gun to the principal. This can be more complicated if the assister is far away from the crime but, subject to relevant evidence, again, assisting in this context is relatively uncontroversial.

(iii) It is the third situation where controversy lies: Say, for example; two people intend to commit a burglary, during the burglary one of them pulls out a knife and stabs the victim (who is also the occupant of the house) and the victim dies. The person who stabbed the victim will be the principal and will be charged as a murderer. That is not controversial.

However, the current state of English law says that the other person, who didn’t kill the deceased, will be convicted of murder, even though he didn’t in fact assist or encourage the murder, provided they foresaw the murder being committed . This means that, if an individual thinks the person he is going along with has a knife or a weapon or they might have a weapon or they might have a personality that might resort in violence and they do commit murder, then as long as at least one of those is foreseen as a possibility then the secondary party will be convicted of murder as well. In all of these cases, if conviction follows, then the sentence will be a mandatory life sentence."

The Crown Prosecution Service have this to say in relation to this third form of joint enterprise liability:

"Where P and D participate together in one crime (crime A) and in the course of it P commits a second crime (crime B) which D had foreseen he might commit.

In this scenario, D may act as a principal or an accessory to crime A. D is also liable for crime B, as an accessory. It is not necessary that D wants or intends this further offence to be committed, although D must have foreseen that P would or might carry out the conduct element of offence B with the necessary fault element of offence B.  This type of secondary liability is sometimes referred to as “parasitic liability” or “parasitic accessory liability”. Most of the case law in this area involves cases of murder and manslaughter, although the principles are applicable to other offences." (My emphasis in Blue).

A difficult with this concept is establishing, by admissible evidence, the degree of foresight necessary.   The phrase "persons unknown" must, in this context, be particularly problematic.  It is hard enough to ascertain the foresight of the defendant (D) in cases where the principal offender is known to D.  How can foresight of what "persons unknown" might do be ascertained and attributed to the defendant?  Is there a danger that the prosecution view of the general ethos of a particular protest group will be attributed to the defendant?  On what basis would such a generalised view be formed?  If so, that could be a major step away from needing to prove the foresight of the individual defendant.

Although details are lacking, Dr Robinson has highlighted what may prove to be an interesting case legally.  It will touch upon the ability to protest about government policy (or its consequences); the proper use of criminal behaviour orders and joint enterprise.  One to watch carefully .....!

A further joint enterprise case is that of Timi Spahiu reported in The Guardian 25th September 2012.
Posted by ObiterJ at Tuesday, October 20, 2015