Tucked away at the bottom right corner of page 49 of the Conservative election manifesto was a pledge to introduce "English votes for English laws" (EVEL).   On 22nd October, the Standing Orders of the House of Commons were amended to give effect to this.  The amendment to standing orders was approved by 312 to 270.

The very convoluted amendments may be read via Parliament's website.  In basic terms, the Speaker will certify whether a Bill (or a clause or a schedule) relates to either (a) England only or (b) to England and Wales.   If the Speaker certifies that it does, then a new stage in the legislative process will apply.  After Report Stage and before third reading, the Bill will have to be approved by a Grand Committee made up of MPs representing (as the case may be) either (a) English constituencies or (b) English and Welsh constituencies.  Thus, the Grand Committee will have a veto over the Bill.  The new process is helpfully shown in this diagram - (click on it for enlargement): 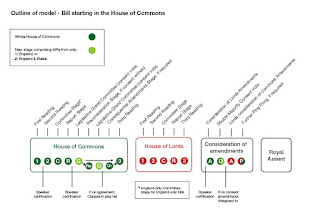 As the articles listed below show, this change is highly controversial in some quarters.

The role of the Speaker
may well prove to be far more complex than perhaps is realised at first glance.  The Speaker has to consider not only whether the subject matter relates to England only (or to England and Wales) but he must also consider whether the subject matter is within the devolved legislative competence of the Scottish Parliament, the Welsh Assembly and the Northern Ireland Assembly.

It is here where legal problems might arise.  The devolution legislation (e.g. Scotland Act 1998) contains provision for devolution questions to be settled by the Supreme Court of the UK.    This has given rise to some difficult cases.  The following are examples -

Where the precise boundaries of devolution lie is ultimately a LEGAL question and this could put the Speaker in a very difficult situation.  It is not clear how problems would be resolved if the Speaker's decision on a Bill were to be challenged.

A further problem for the Speaker might be that the Standing Orders - 83J(6) - state:

Just what will be minor or consequential remains to be seen.  For example, it can be argued that a Bill to build a new runway at London Airport would have considerable consequential effects in parts of the UK other than England but, on this process, the Speaker could disregard those for the purposes of certification.

The revised procedure will not apply to certain types of Bill - 83J(9).  Those include a Bill the main purpose of which is to give effect to proposals contained in a Law Commission report.  Another excluded Bill is a "Tax rewrite Bill."

All MPs will continue to be able to speak and vote at stages other than the new Grand Committee stage. Thus, the actual outcome is certainly NOT English Votes only for English laws.  Effectively, the new process gives English MPs the right to veto English only laws.

The following articles are just a selection from many but I found them interesting and informative.  This article, in particular, argues that no MP from a Scottish, Welsh or Northern Ireland seat could ever become Prime Minister whilst this system is in force- Wings Over Scotland - The Triumph of EVEL

The continual tinkering with the constitution is a serious problem.  Alter one part and it has serious and perhaps unforeseen consequences elsewhere.  A more careful approach to constitutional change is required.

Of Interest to Lawyers blog - Rational Federal Constitution for the UK or a fathomess hokey cokey: EVEL

The Courier - Speaker explains how EVEL will affect Commons business

Wings Over Scotland - The Triumph of EVEL