Henry VIII - King of England from 1509 to 1547 - pursued power ruthlessly and it is said that he wore out eight horses a day when hunting!  One way in which his name is remembered in legal circles is the so-called "Henry VIII" power.  This is a very prevalent method by which Parliament grants to Ministers sweeping powers including, sometimes, power to amend primary legislation.  The power is usually exercised by way of a Statutory Instrument and it is usual for a draft of the instrument to have to be "laid before Parliament" for a period prior to it becoming law.  In some instances, both Houses of Parliament must vote to approve the instrument (known as "affirmative resolution procedure").


Power to use a Statutory Instrument to amend the Hunting Act:

A person commits an offence if he hunts a wild mammal with a dog, unless his hunting is exempt.

The Act section 2 states in relation to Exempt Hunting:

(1) Hunting is exempt if it is within a class specified in Schedule 1.

(2) The Secretary of State may by order amend Schedule 1 so as to vary a class of exempt hunting.

Section 14 of the Act requires that an order be laid before Parliament and approved by resolution of each House.

On 15th July there is to be a 90 minute debate in the House of Commons on government amendments to the Hunting Act - see The Guardian 9th July 2015.  The draft order is The Hunting Act 2004 (Exempt Hunting)(Amendment) Order 2015.  It puts forward extensive amendments to Schedule 1 of the Act but I will focus on the proposed amendment to Paragraph 1 (Stalking and Flushing Out).

Schedule 1 Paragraph 1 exempts "Stalking and Flushing Out" from the ban on hunting provided that five conditions are met.  In particular, Schedule 1 sub-paragraph 5 currently states: The third condition is that the stalking or flushing out does not involve the use of more than two dogs.

The limitation to two dogs is to be removed.  The proposed amendment is: "The third condition is that the number of dogs used - (a) is appropriate, having regard to the terrain and other relevant circumstances, and (b) enables the stalking or flushing out to be carried out as efficiently as possible."

The government rationale for the amendment is to bring the law into line with that in Scotland but it is hardly legal rocket-science to see that this amendment will enable it to be more readily argued that the stalking/flushing out comes within the exemption.

The Hunting Act 2004 consumed numerous hours of Parliamentary time and there were challenges in the courts - Jackson v Attorney-General [2005] UKHL 56 and R (Countryside Alliance and others) v Attorney General [2007] UKHL 52.  The challenges failed though they are now of considerable interest to legal students.* (see Note below).  In the latter case, Lord Bingham commented:

"Fox-hunting in this country is an emotive and divisive subject. For some it is an activity deeply embedded in the tradition, life and culture of the countryside, richly portrayed in art and literature, a highly cherished, skilful, healthy and useful form of communal outdoor exercise. Others find the pursuit of a small animal across the countryside until it is caught and destroyed by hounds to be abhorrent. Both these deeply held views were fully expressed in the discussions and debates which preceded the enactment of the Hunting Act 2004."

It is for Honourable Members of the House of Commons to say whether 90 minutes is sufficient for a debate amending this legislation.  Chris Grayling - (now Leader of the House of Commons) - has stated that "a 90-minute debate for a statutory instrument is the normal length for a debate on a statutory instrument before the House."  Perhaps, given the emotive nature of this topic as well as the history of the Act, rather more time ought to be allowed.  The spirit of the tyrannical Henry VIII seems at times to live on in the form of Ministerial autocrats anxious to push through these amendments and then "move on."

* See, for example, House of Lords Select Committee on the Constitution - 7th Report of session 2005-6 - "Constitutional aspects of the challenge to the Hunting Act 2004" 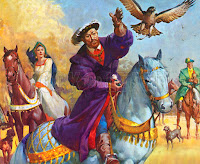