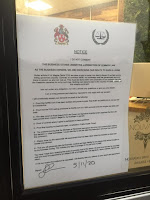 "The defiant owner of a hair salon which has repeatedly flouted lockdown restrictions has been hit with another £10,000 fine, taking the total to £27,000.

Quinn Blakey Hairdressing, on Bradford Road, Oakenshaw, has continued to breach the current rules which require some businesses, including hairdressers, to close.

The newspaper continues by reporting - "The salon has cited Article 61 of the Magna Carta in defence of staying open ...."

We may as well note what Article 61 was about. It was a lengthy article and appeared in the earliest version of Magna Carta dated 1215. It was concerned with giving barons a right to elect 25 barons to "observe, keep and cause to be observed, the peace and liberties which we have granted ..."

The Article did not appear in versions of the Charter dated 1225 and later - see this website for texts.

Very little remains of Magna Carta at the present day but what there is dates from 1297 - see Legislation website.  Article 29 remains in force and states -

"NO Freeman shall be taken or imprisoned, or be disseised of his Freehold, or Liberties, or free Customs, or be outlawed, or exiled, or any other wise destroyed; nor will We not pass upon him, nor condemn him, but by lawful judgment of his Peers, or by the Law of the Land. We will sell to no man, we will not deny or defer to any man either Justice or Right."

The Bradford, West Yorkshire hairdresser somehow got the idea that Article 61 was law and could save her from the penalties. That view is legal nonsense. Article 61 has not been there for around 800 years!

Why such high fines?

The problem lies with The Health Protection (Coronavirus, Restrictions) (England) (No.4) Regulations 2020 - (SI 2020/1200)-  (32 pages pdf). The legislation was put together when, in late October / early November, it was decided by government that the "three tier system" of restrictions had to be replaced with a new set of "lockdown" restrictions applicable throughout England. Further details are in this earlier post.

Regulation 16 and the Schedule (Part 2) provide for closure of certain businesses including hair salons.

Regulation 19 provides for Prohibition Notices.  It appears from the newspaper article that such a notice was issued to the hairdresser.

Under Regulation 20 it is an offence, without reasonable excuse, to contravene (inter alia) Regulation 16.

Are the penalties excessive?

Receiving a FPN of even £1,000 is not a trivial matter. Many people - especially those small businesses prevented from trading by the restrictions - are financially stretched. Many will be lucky to survive. There is no procedure to appeal the FPN itself. Those who do not pay within 28 days lose their chance to avoid criminalisation, become liable to prosecution and must take their chances in the Magistrates’ Court.

For a time, the Police stopped issuing £10,000 notices - Sky News - but it was later reported that the National Police Chiefs' Council had said that Police could resume handing out the notices provided that the individual was told of the alternative of a prosecution - The Guardian 17 November.

Unsurprisingly, the government has defended this level of fixed penalty notice by claiming that a strong deterrent is required. There is nothing wrong in principle with permitting the Police to issue a fixed penalty of a sensible amount for a first infringement.  But a power to go on issuing further high value FPNs,  which are added to any earlier FPNs, is bound to make the financial strain excessive for most individuals / small businesses.  Failure to pay the FPNs within 28 days will lead to a prosecution which the fixed penalty system is essentially designed to avoid.

Whether Parliament should authorise Regulations with such large FPNs is debatable. For my part, I think not. Another old piece of legislation - actually still in force - is the Bill of Rights 1688 in which it is stated that - " ... excessive Baile ought not to be required nor excessive Fines imposed nor cruell and unusuall Punishments inflicted."

I do NOT suggest using this as a defence in court. The Bill is undoubtedly a constitutional statute and the excessive fines provision is probably to be seen as a limitation placed upon Parliament itself. After all, the Bill itself sets out grievances which had existed at the time and one of them is that excessive fines had been imposed.

The shopkeeper may wish to make what she sees as a "point of principle" but it is legal madness to try to use an article of Magna Carta which is no longer there!  It is also madness - and probably contrary to the Bill of Rights - to legislate for penalties which are, on any sensible view, well beyond the ability of most people to pay.

Further legal madness is the "Freeman on the Land" nonsense which appears from time to time. It is high time it stopped being peddled. It only serves to damage lives and livelihoods.

Update 21 April 2021 - BBC News Covid update reported that Sinead Quinn is being taken to court over £17,000 of fines, with Kirklees Council saying she has not paid anything after repeated breaches.