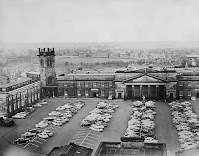 On the evening of 10 August 2007, Mr Garry Newlove went out of his house in Warrington in order to remonstrate with a group of young men who were damaging vehicles in the street. He was attacked by the group. He went to the ground. He was punched and kicked. One of the blows, which could have been a punch or a kick, caused a tear of a major artery in his neck close to his brain. This led to catastrophic brain damage. Mr Newlove died two days later in hospital. Mr Newlove's three daughters witnessed the attack.

Adam Swellings, Stephen Sorton, Jordan Cunliffe and two others were tried for murder. The trial was held in January 2008 at the Crown Court in Chester before Andrew Smith J and a jury. Swellings, Sorton, and Cunliffe were convicted and the two others were acquitted. Minimum terms imposed on the three convicted were, respectively, 17, 15 and 12 years.

Jordan Cunliffe's case has become the better known of the three because of the (unsuccessful) and well publicised efforts by his family to clear his name.

Cunliffe - application to appeal out of time:

Jordan Cunliffe applied unsuccessfully for leave to appeal out of time against his conviction (based on fresh evidence and the failure to provide a tailored good character direction): [2010] EWCA Crim 2483 (Moses LJ, Kenneth Parker J and Judge Bevan QC). It is not a lengthy judgment and should be read in full.

An appeal against sentence was technically successful in that he should have been sentenced to detention at Her Majesty's Pleasure subject to a minimum term rather than custody for life. The Court of Appeal substituted such a sentence but did not alter the minimum term.

In August 2014, Jordan Cunliffe applied to the Criminal Cases Review Commission ("CCRC") seeking a referral of his case to the Court of Appeal (Criminal Division) pursuant to s. 9 of the Criminal Appeal Act 1995. The grounds of the application related to the visual disability to which he was subject at the time of the attack on Mr Newlove. In August 2015, further submissions were made to the CCRC based on the decision in R v Childs and Price [2015] EWCA Crim 665: these submissions concerned the issue whether proper directions were given in respect of a defendant whose participation in the joint enterprise began only after the fatal blow was struck. Finally, in February 2016, the Supreme Court handed down its decision in R v Jogee, Ruddock v The Queen [2016] UKSC 8, [2017] AC 387 ("Jogee"). In the light of that decision, further submissions were made to the CCRC concerning the directions on joint enterprise given at trial.

Other legal proceedings brought by Cunliffe included applications to the High Court for the minimum term to be reduced on the ground that he had made exceptional and unforseen progress since sentence. Such applications failed in 2015 and in 2019.

On 16 September 2020, a panel of the Parole Board decided that Cunliffe could be released. The Secretary of State applied for reconsideration of that decision. The application was rejected for reasons set out by Michael Topolski QC on 23 October 2020 and reported at [2020] PBRA 157.  See also - Warrington Guardian 24 February

Cunliffe is now 29 years old and his 12 year minimum term expired on 14 August 2019. His release might have been sooner but an incident occurred in December 2019 as a result of which he was returned to closed conditions. A group of prisoners had gathered late at night in Cunliffe's room. They were noisy and there was some violence although it was not suggested that Cunliffe was involved in the violence. It was believed that some alcohol had been taken and that those involved should take a breathalyser test. Cunliffe refused. The authorities decided that it was necessary in the interests of public protection to determine what had happened in December and to review Cunliffe's risk assessment. Fuller detail is to be found in Topolski QC's decision.

Topolski found that the decision letter of 16 September was "a thorough, careful and balanced analysis of a large body of evidence in a very serious and difficult case. Topolski was in no doubt that the conclusions of the prison authorities was adequately explained and justified by the evidence they considered.

Jordan Cunliffe has, since childhood, suffered from a degenerative eye condition and he is now registered blind. Questions therefore arose as to exactly what Cunliffe (at the time aged 16) realised the other members of the group were doing at the time of the attack on Mr Newlove.

The Independent 11 February 2015 reported that Jordan's mother believes that her son could never have contributed to the crime because of his eyesight: severe keratoconus, a degenerative eye condition which distorts vision.  The article reports her as saying - "Jordan has always said he was not involved in the assault and was in fact several yards away, although he had been with his co-accused, Adam Swellings, then 19, and Stephen Sorton, 17, that evening. The prosecution never gave his eye condition any consideration during the trial. They just said because he could kick a football, he was capable of killing a man. There was never any credit for his disability. His impaired vision, and the speed of the attack, means he would have had no knowledge of what was to happen, so he can’t be guilty, she argues.

Around the time of the murder of Garry Newlove there were a number of cases that raised concern about individuals who  were on bail at the time they committed murder. One example is the Weddell case.

e.g. 1 - A judge granted bail to Garry Weddell, a former Police Officer, even though Weddell was charged with the murder of his wife. Weddell went on to shoot his mother-in-law (Traute Maxfield) before killing himself.

e.g. 2 - Anthony Peart was convicted of the manslaughter of Mr Richard Whelan on the basis of diminished responsibility. At the time that he killed Mr Whelan he was on bail, granted by the Crown Court, for burglary. The Guardian 28 April 2008.

e.g. 3 - Cunliffe's co-defendant Adam Swellings appeared before Warrington Magistrates Court charged with assault on a girl.  Bail was refused but later, having pleaded NOT guilty, he was granted bail. The case went to the Crown Court where, some months later, Swellings pleaded guilty and was bailed pending sentence. During the evening of the same day, Swellings assaulted a man.

A couple of days later, he was re-bailed in absence over an ssault on a girl by Warrington Crown Court but was remanded in custody by Runcorn magistrates for the assault on the man.

A further week later, on 10th August 2007, Swellings pleaded guilty at Warrington Magistrates’ Court to the assault on the man but was granted bail pending sentence. The same evening he, with two others, murdered Mr Garry Newlove.

The outcome of such cases was that the government brought into force sections 114 and 115 of the Coroners and Justice Act 2009. These amended the Bail Act 1976 and removed the power of a Magistrates' Court to grant bail to an individual who is charged with murder - previous post 1 February 2010.

The young males involved in the murder of Garry Newlove were said to have been a "joint enterprise".

The law relating to Joint Enterprise was amended with the case of R v Jogee - Previous post 1 September 2018. For over 30 years the criminal law had equated 'foresight' of what a principal offender might do with 'intent to assist' the principal offender.  In R v Jogee [2016] UKSC 8, the Supreme Court unanimously held that the correct approach was to treat such foresight as ‘evidence of intent’ together with the rest of the evidence - Previous post 18 February 2016 and Barrister Magazine 20 April 2016.

Mr Newlove's widow, Helen Newlove, was appointed Victims' Commissioner in 2012. She became a life peer in the 2010 Dissolution Honours list and sits in the House of Lords as a Conservative.