Brexit: "High hearts and complete confidence" - if only !

On 16 October, the Prime Minister issued a statement on the UK-EU negotiations and poured cold water on any remaining optimism about the future UK-EU relationship even though, strictly-speaking, a possibility of a trade deal may still exist.

This followed the outcome of the 15 October EU Council meeting held in Brussels - see previous post of 16 October.

It is worth recalling the 2019 withdrawal agreement and the political declaration.

The Withdrawal Agreement recognised the need for both the UK and the EU to take all necessary steps to negotiate 'one or several agreements' governing their future relationship with a view to ensuring that, to the extent possible, those agreements apply from the end of the transition period.'

In what seems like the now largely forgotten political declaration

it was stated (at para 17) that - 'The Parties agree to develop an ambitious, wide-ranging and balanced economic partnership. This partnership will be comprehensive encompassing a Free Trade Agreement, as well as wider sectoral cooperation where it is in the mutual interest of both parties.'

The Prime Minister said in his statement that the EU summit 'appears explicitly to rule our a Canada-style deal.  He therefore concluded that the UK should get ready for January 1st with arrangements that are 'more like Australia's based on simple principles of global free trade.'

It is plain enough to most people following the UK-EU negotiations that the EU was prepared to offer a deal but difficulties remained in relations to level playing field requirements, governance, and fisheries - (see the links at the end of this post).

Issues relating to food standards are also at play. As repoted by Specialty Food Magazine 1 October 2020, Charles Michel (President of the European Council) said that the UK faces a "dilemma" on food standards. Michel went on to say. “Would they rather maintain high standards (in health and food safety, the environment, etc.)? Or do they want to lower their standards, exposing their farmers and businesses to unfair, cut-throat competition from other parts of the world? “The answer to that question will determine what level of access we can grant to our internal market,” he said.

Johnson's statement also claims that the EU is seeking to control the UK's legislative freedom. This does not actually appear to be the case but the EU expressed its concern over the Internal Market Bill and asked for the removal of those clauses permitting Ministers to make Regulations contrary to the Withdrawal Agreement.  The clauses remain in the Bill which is due for Second Reading in the House of Lords on 19 October - (coincidentally the anniversary of the Withdrawal Agreement).

The Prime Minister also referred to an Australian-style deal. There is in fact no such deal but Australia is engaged in discussions with the EU. On 22 May 2018, the Council of the European Union adopted a decision authorising the opening of negotiations for a Free Trade Agreement between the EU and Australia -see Europa Trade Policy (Australia).

The idea of an Australian-style deal is explained at UK and EU where it is pointed out that Australia has agreements with the EU related to trade, but it does not yet have a comprehensive free trade agreement in place; indeed, it has been negotiating one with the EU since July 2018. The bulk of EU-Australia trade is currently done according to World Trade Organisation (WTO) rules. But they do have other agreements in place, on trade and other issues.

Whilst Johnson's statement admits that progress has been made on issues such as social security, aviation, nuclear cooperation etc. it remains far from clear what, if anything, will be finally agreed even on such crucial sectoral matters.

As reported by The Independent 15 October, Mr Grant Shapps MP (Secretary of State for Transport) has acknowledged that flights between the UK and the European Union could be grounded from 1 January 2021 in the event of a no-deal Brexit. At present, UK and EU airlines are able to fly any routes they wish under the long-standing “open-skies” agreement within Europe. That agreement will not cover the UK after 31 December when the transition period ends. Grant Shapps told the virtual convention of ABTA, the travel association: “We’re seeking arrangements that will maintain connectivity.” A good analysis of the situation facing civil aviation was published by the Institute for Government on 24 February 2020 and, more recently, see LSE 8 September 2020 - The UK's independent safety regulator will come at a cost.

A possibility of a trade deal probably remains despite the Prime Minister's statement but, at the time of writing, now seems unlikely and it is unclear whether further talks will take place at negotiator level.  The Independent 16 October reported that Downing Street said there is "no point" in Michel Barnier coming to London on Monday for planned Brexit talks, unless Brussels adopted a "fundamental change of approach".

A "no trade deal" will also exacerbate the already problematic relationship between Scotland and London. The Scotsman 16 October reported - "Although just over two months remains for the impasse to be resolved, the outlook is bleak. It will mean tariffs on the export of goods and extensive regulatory checks on goods crossing the Channel."

The UK's credit rating was downgraded by Moody's as a result of  a decline in economic strength in the wake of the coronavirus pandemic and continued Brexit uncertainty - The Guardian 16 October.

"And so with high hearts and complete confidence we will prepare to embrace the alternative", claimed Mr Johnson. If only that were the case !

Further developments are awaited. Meanwhile, take a look at the lorry parks in Kent .... this one at Sevington ... 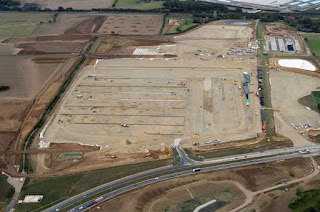