This post considers the controversial Overseas Operations (Service Personnel and Veterans) Bill but first a note about the Independent Review of Administrative Law (IRAL).

The Independent Review of Administrative Law (IRAL) - post 4 August 2020 - issued a call for evidence “on how well or effectively judicial review balances the legitimate interest in citizens being able to challenge the lawfulness of executive action with the role of the executive in carrying on the business of government, both locally and centrally”.

The call for evidence, which can be viewed here, commenced on 7 September and is running until midday on 19 October 2020. 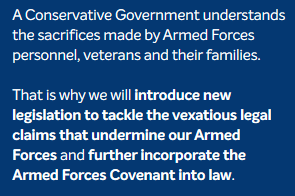 The government's follow up to tackling to so-called "vexatious claims" is the Overseas Operations (Service Personnel and Veterans) Bill 2019-21.  The Bill contains 16 clauses (divided into 3 Parts) and 4 Schedules.

The Bill is highly likely to cause damage to the reputation of the UK's Armed Forces. The Times 18 September (£) reported that Field Marshal Charles Guthrie (a former Chief of the Defence Staff), the ex-defence secretary Sir Malcolm Rifkind, and Dominic Grieve (a former attorney-general), sent a letter to Downing Street raising concerns about the Bill.

The bill would greatly increase the risk that British soldiers who commit serious crimes will avoid justice. It does this by creating a “presumption against prosecution” for members of the United Kingdom armed forces accused of crimes, including torture, committed overseas more than five years earlier.

The government argues that it is necessary to protect UK forces from “vexatious” prosecutions. In fact, there have been very few such criminal cases despite inquiries revealing evidence of torture by UK forces in Iraq.

As argued by Clive Baldwin writing for Human Rights Watch, "the UK does indeed have a problem with justice for crimes committed by military personnel and civilian officials overseas – but the problem is that hardly anyone gets prosecuted, let alone convicted. This dates back many years – after the Amritsar Massacre in India in 1919, a public inquiry found UK forces had committed crimes, but no one was ever prosecuted. As a major media investigation has confirmed, there has been repeated political interference by UK ministers to stop accountability, such as shutting down the UK criminal investigation into alleged crimes in Iraq before it had completed its work.

The International Criminal Court (ICC) prosecutor recently determined there is a basis to allegations that UK armed forces committed war crimes against detainees in Iraq. The ICC can only step in when national authorities do not genuinely investigate, so the prosecutor should take a very close look at the government’s bill in deciding whether or not to open its own probe.

The presumptive time-limit of five years comes close to a “statute of limitations” for grave international crimes. It will encourage a culture of delay and cover-up of criminal investigations. On Iraq, UK courts have found it was the Ministry of Defence that caused delay in investigations, creating unfairness to all involved.

The UK government’s proposals are a sad reflection of its record of political interference to prevent justice and accountability. If this law is passed, it would set a terrible precedent for the “rules-based international order” it claims to uphold."

Further cogent criticism of the Bill is by Nicholas Reed Langen at The Justice Gap (4 October) - A uniquely reprehensible Bill.  It is pointed out that "the primary ambition of the bill is ostensibly to protect soldiers from having their conduct in the field unnecessarily scrutinised" but "the more alarming" consequence is "how it protects the government."

The article notes - "In recent years, courts have become less willing to allow governments to use the justification of war as an excuse for failing to protect the rights of soldiers and victims.  In 2013, the Supreme Court ruled in Smith v Ministry of Defence that the government had to consider the soldiers’ right to life under Article 2 of the ECHR, and that simply being abroad did not mean they sacrificed the protection of UK law entirely, while in Al-Skeini, the European Court of Human Rights held that detainees under the control of the UK abroad are also protected by the ECHR.

For critics of judicial review,  this ‘lawfare’ hinders the ability of the government to properly wage war, distracting the government with unnecessary concerns, like the rights of soldiers."

One reality of the Bill is that, far from defending our service personnel, the bill limits the ability of the same personnel to hold the government to account for failures to protect them during operations (e.g. by providing suitable equipment etc).

Derogation from the European Convention on Human Rights:

The Bill (Clause 12) seeks to place a duty on the Secretary of State to consider derogation (under Article 15 of the Convention ) in relation to any overseas operations.

Article 15 ECHR enables a State to derogate from the Convention in "time of war or other public emergency threatening the life of the nation." In such a situation any derogation must be only "to the extent required by the exigencies of the situation" and measures must not be inconsistent with other obligations under international law. No derogation may be made in respect of Article 2 (except in respect of deaths resulting from lawful acts of war).  Also, no derogation is permitted from Articles 3, 4(1) and 7.

This article at EJIL: Talk! is worth reading.

Daniel Holder notes the Written Ministerial Statement of 18 March 2020 by which the Secretary of State for Northern Ireland announced the unilateral-abandonment by the UK of the Stormont House Agreement (SHA) to, in his words, ’ensure equal treatment of Northern Ireland veterans and those who served overseas’.

On 29 September it was announced that there would be no more prosecutions in Northern Ireland relating to Bloody Sunday - BBC News 29 September.

Further reading and analysis of the Bill  may be seen at -

UK Constitutional Law - Bethany Shiner and Tanzil Chowdury - The Overseas Operations (Service Personnel and Veterans) Bill and Impunity of the British State - "Despite the Bill being described as a way to protect soldiers from the ‘industry’ of “vexatious claims” and preserve the ability of combat forces to fight wars effectively, there is every suggestion that this is really about precluding, or at least severely limiting, the accountability of the British state in its overseas military deployments."

Shiner and Chowdury argue that the Bill would decriminalise torture in some circumstances. " Torture is a gross violation of International Human Rights Law, a serious violation of International Humanitarian Law and a crime. As such, attempts to time-bar victims of torture from bringing civil and human rights claims and placing temporal barriers to prosecuting perpetrators is not consistent with international law (here and here)."


Law Society Gazette 23 September 2020 - "Concerns are growing in the legal sector about legislation which will impose new time limits on veterans bringing personal injury claims against the Ministry of Defence."