Brexit and civil aviation ~ a note 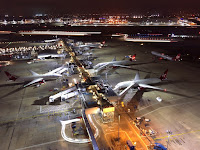 Back in July 2018 this blog took a look at the possible impact of Brexit on the civil aviation sector. This post notes some developments which should, at least in the short term, minimise disruption to civil aviation in the event that Brexit takes place without an Article 50 withdrawal agreement.

This sector operates within a complex system of international regulation including regulation by European agencies such as the European Union Aviation Safety Agency (EASA) created by the EU in 2002.

The UK government has
issued Guidance - Air services from the EU to the UK if there is a no-deal Brexit - a "Policy statement on UK position on rights for airlines from EU countries, and the basis on which flights will continue if there is a no-deal Brexit." This document, is the UK’s response to the measures contained in the EU’s no-deal air connectivity regulation and provides further information about the basis on which flights will continue between UK and EU in the event of ‘no deal’. The document was updated on 5 September, extending the provisions contained to October 2020, reflecting the revised 31 October 2019 Brexit date and a correspondent extension of the provisions contained in the EU connectivity regulation.

The guidance draws attention to EU Regulation 2019/502 - common rules ensuring basic air connectivity with regard to the withdrawal of the United Kingdom of Great Britain and Northern Ireland from the Union.

This Regulation provides the basis for EU countries to give UK airlines permission to operate if the UK leaves the EU without a deal. Subject to some minor modifications, it also applies to Norway and Iceland through its incorporation into the EEA Agreement.

The UK will, subject to certain requirements, grant airlines licensed in EU countries a level of access to the UK that is at least equivalent to the rights granted to UK airlines under the EU Regulation, for the period during which that Regulation applies (i.e. under current proposals, October 2020).

The Aviation Safety (Amendment etc.) (EU Exit) Regulations 2019 were enacted under powers* in the European Union (Withdrawal) Act 2018 to correct deficiencies in EU-derived aviation safety legislation arising as a result of the withdrawal of the United Kingdom from the European Union (“EU”). This will ensure that the legal framework on aviation safety continues to function correctly after exit day.  The Regulations were amended by the Aviation Safety (Amendment etc.) (EU Exit) (No 2) Regulations 2019.

The Aviation Safety regulations come into force on Exit Day (currently defined as 11pm on 31 October 2019).