"The prorogation of Parliament is a prerogative act of the Crown. Just as Parliament can commence its deliberations only at the time appointed by the Queen, so it cannot continue them any longer than she pleases" - Erskine May at para 8.5.

That statement sets out the basic legal position relating to prorogation.  Prorogation is dealt with in greater detail by Graham Cowie in a House of Commons Library Briefing Paper - CBP8589. In practice, the prerogative power to prorogue parliament is exercisable
on the "advice" of the Prime Minister and it was on Prime Minister Johnson's "advice" that the Privy Council issued the prorogation order and effectively removed parliament from the scene until 14 October.  By convention, the Queen is bound to accept the "advice" offered and the Prime Minister carries responsibility for it.  [See the Prorogation Order - 28 August 2019 Orders Approved].

The present prorogation is different.  It brought to an end a parliamentary session which lasted for over 2 years. The prorogation is 5 weeks in duration and takes place at a time when the question of whether there is a "no-deal" Brexit is at the forefront of British politics. With only three exceptions, Bills have not been carried over and will have to start their parliamentary process again in the new session. A new legislative programme is to be announced in the Queen's Speech on 14 October. The Johnson government has openly stated that it does not wish to delay Brexit further but Parliament has legislated with a view to preventing a no-deal Brexit - previous post 13 September.

It is remarkable that the constitution permits the executive to prorogue parliament and, in doing so, remove the very body to which the executive is accountable. It is perhaps more remarkable that the prorogation power may be exercised at any time chosen, in practice, by the Prime Minister and the prorogation could be for a lengthy period.  Repeated prorogations also appear to be permissible.  The potential for abuse of such a power is obvious.

It is against this background that applications for judicial review were issued in Scotland, London and Belfast. A key issue in those reviews is whether the prerogative power of prorogation is a suitable matter that is amenable to judicial review.

It was previously thought that prerogative powers were not amenable to judicial review but the legal position changed with the Civil Service Unions case decided by the House of Lords in 1984 - Council of Civil Service Unions v Minister for the Civil Service [1984] UKHL 9. Their Lordships held that, in principle, government action under prerogative powers could be the subject of judicial review. Whether such action was amenable to judicial review depended not on the source of the power in question but on the subject-matter. The speeches of their Lordships noted that some areas of high politics would continue to be outside the scope of judicial review - e.g. powers to wage war, to conduct foreign affairs and to dissolve parliament.

Whilst the law has developed further since the Civil Service case, it continues to be a matter of intense debate as to whether some matters are suitable for judicial intervention.

Before the High Court, the claimants (including Gina Miller), argued that the Prime Minister had abused his powers. In particular, the PM had undermined parliamentary sovereignty by proroguing so as to prevent parliament opposing his Brexit policy.

The High Court ruled that the the decision of the Prime Minister to advise Her Majesty the Queen to prorogue Parliament is not justiciable in Her Majesty’s courts-  - Judiciary - Gina Miller v Prime Minister and others [2019] EWHC 2381 (QB).  In simple terms, the advice was not a matter which the courts had jurisdiction to rule upon because it was "inherently political in nature."

The Court of Session (Outer House) held that matter was non-justiciable - Cherry [2019] CSOH 70.  The prorogaton was a "matter involving high policy and political judgement."

The Inner House reversed that decision and held that the advice given to the Queen to prorogue parliament was unlawful and, therefore, the prorogation itself is unlawful - Joanna Cherry QC MP v Advocate General [2019] CSIH 49.  Lord Carloway said that the true purpose of the prorogation was to stymie parliamentary scrutiny and that it had undermined democracy and the rule of law.

The Supreme Court, sitting with 11 Justices, will hear appeals over Tuesday 17 September to Thursday 19 September.  The appeals are brought by the government against the decision of the Court of Session (Inner House) and by Gina Miller against the decision in the High Court of England and Wales. Given the current importance of the matter, judgments in these important constitutional cases are likely to be handed down reasonably soon afterwards.

For further details see this page on the Supreme Court's website and see the court's timetable.

Written cases for the parties are also available online.

Public Law for Everyone 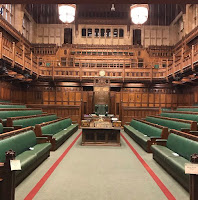