It is wholly inadequate to say that the political events of the last few days have been "utterly extraordinary." Even during the many turmoils since the end of World War 2 it is impossible to find a situation in which there has been this degree of breakdown in the trust required between government and parliament. Political actors have to be trusted to observe the laws and conventions underpinning the UK's uncodified and, at times, ill-defined constitutional arrangements. In particular, trust is crucial so that government respects the role of parliament and vice versa.

Suspicion was confirmed by
the resignation letter of Amber Rudd (Secretary of State for Works and Pensions) that the Prime Minister was not serious about negotiating with the European Union either a new or modified withdrawal agreement. Rudd resigned as a Minister and also resigned the Conservative Party whip. She stated that - "I no longer believe leaving with a deal is the Government's main objective. The Government is expending a lot of energy to prepare for 'no deal' but I have not seen the same level of intensity go into our talks with the European Union, who have asked us to present alternative arrangements to the Irish backstop." The former Home Secretary added - "I must also address the assault on decency and democracy that took place last week when you sacked 21 talented, loyal One Nation Conservatives. This short-sighted culling of my colleagues has stripped the party of broad-minded and dedicated Conservative MPs I cannot support this act of political vandalism." Rudd's letter did not mention the prorogation of Parliament.

The prorogation of Parliament for 5 weeks was announced on 28 August and is discussed in this previous post where I wrote - "The ulterior motive for this lengthy 5 week prorogation appears to be a deliberate government ploy to secure a policy objective (Brexit - including no-deal) by removing a potentially awkward House of Commons from the political scene for as long as possible."

The prorogation actually took place in the small hours of Tuesday morning 10 September even though the legality of prorogation is the subject of judicial reviews in London, Edinburgh and Belfast - post 5 September. By use of long-standing prerogative power, the executive has removed parliament from the political scene until 14 October - a mere 17 days prior to Brexit which will take place at 11pm on 31 October (unless a further extension is agreed).

The reader may well think that it is a remarkable power that the executive can removed the very body to which it is supposed to be accountable. I am of the view that this power ought to be taken away from the executive and placed under the control of Parliament itself.

As things stand, the Brexit on 31 October will be without a withdrawal agreement: the worst of all Brexit possibilities and one to which even most leave voters had not seriously addressed their minds when deciding how to vote in the 2016 referendum. Whilst preparations for no-deal are on-going within government - Operation Yellowhammer - there has been refusal to hand to parliament material showing their preparations. Plainly that is a situation which hardly helps those on the outside of politics to make their preparations for a post-Brexit world of trading on World Trade Organization (WTO) terms.

On 9 September, the House of Commons voted (311 votes to 302) to present another "Humble Address to Her Majesty"- see Hansard 9 September.  This asks that the Queen "be graciously pleased to direct" Ministers to lay before the House the specified material, not later that 11.00 pm on 11 September 2019. The specified material is government "Yellow Hammer" documentation submitted to the Cabinet or a Cabinet Committee.  Further, and perhaps more controversially, the Address also calls for disclosure of "all correspondence and other communications" sent or received by one or more of nine named individuals.  It remains to be seen how government complies with the Address.

Ministers have published details of their Yellowhammer contingency plan, after MPs voted to force its release.

On 9 September, a further matter was raised by the Leader of the Opposition - Hansard - Rule of Law.

"That this House has considered the welcome completion of all parliamentary stages of the European Union (Withdrawal) (No. 6) Bill and has considered the matter of the importance of the rule of law and Ministers’ obligation to comply with the law.”

This motion was passed without a vote. It is truly extraordinary that there was even the slightest question as to whether government would obey the law as enacted by Parliament.  This brings us to the European Union (Withdrawal) (No 2) Act 2019..

The No.2 Act began life on 4 September (see Hansard) as the European Union (Withdrawal) (No 6) Bill. It received Royal Assent on Monday 9 September.  Section 1 of the Act places on the Prime Minister a duty, in specified circumstances, to seek an extension of UK membership of the EU to 31 January 2020. Section 3 of the Act requires the Prime Minister to accept an extension of membership if it is agreed by the EU.  The perceived need for this legislation and the debate relating to Rule of Law are both ample demonstrations of the extent to which trust in the executive has evaporated.

Yet another event on 9 September was that a further vote was held on a motion under the Fixed-term Parliaments Act 2011 for an early election. This was the Prime Minister's second attempt to secure a general election and he was defeated. The voting was 293 in favour to 46 against BUT the required two-thirds majority was not achieved principally due to abstentions - Hansard 9 September and BBC News 10 September 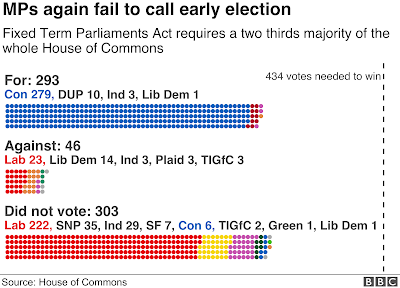 The session of Parliament then came to an end with a Her Majesty's Most Gracious Speech and the prorogation ceremony held in the House of Lords chamber with parliament prorogued at 0140 hours. Parliament therefore falls silent ahead of the most crucial time the UK has faced within recent history.

There are those who consider the prorogation to be shameful - The Guardian 10 September.  At the very least it is astounding that parliament is removed from the national scene at such a vital time.

The UK now has rule by the executive for 5 weeks until the Queen's Speech planned for 14 October when a "new and exciting programme" for government is promised by the Prime Minister even though he has totally lost his majority in the House of Commons and thereby his ability to secure the legislation required to deliver such a programme. This hardly augers well for the future and a general election cannot be long delayed.

Such was the day when Boris Johnson lost his sixth parliamentary vote in as many days and John Bercow announced his impending retirement as Speaker. Bercow's departure will, at least, avoid the Conservative Party breaching the long-standing practice whereby the Speaker is not opposed at a general election - Sky News 8 September.

The Guardian 10 September - With Parliament out of the picture, what happens next? Catherine Haddon (Institute for Government)