On 3 September 2019, the House of Commons returned after its summer recess which commenced 25 July. The day also saw the substantive hearing in Scotland's Court of Session of a judicial review relating to the prorogation of Parliament.

An application to hold an emergency debate was made by Sir Oliver Letwin MP who said - " ...in the light of the Government’s decision to prorogue Parliament next week it has become an urgent matter for Parliament, and particularly this House, to discuss whether it can accept a no-deal exit. I therefore ask you to grant an urgent debate under Standing Order No. 24."  The Speaker
replied that he had considered the matter and that it was a proper matter to be discussed under the terms of Standing Order No. 24. Leave was granted.

In the subsequent debate - see Hansard - a detailed (25 clause) motion was debated which sought to ensure that the European Union (Withdrawal) (No 6) Bill could pass through its House of Commons stages rapidly. Although opposed by the government, the motion was passed by 328 votes to 301.  The debate was remarkable in that 21 Conservative MPs opposed to a "no-deal" Brexit chose to vote against the government.

It is reported that those 21 MPs had the Conservative Party whip removed.  That makes the political complexion of the Commons even more problematic.  The following diagram is from BBC News 4 September 2019 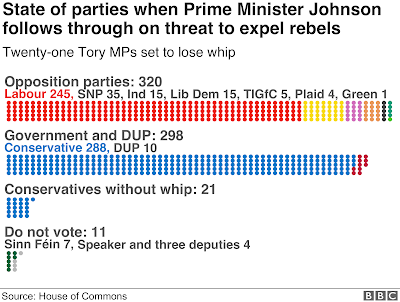 The outcome is that proceedings on the No.6 Bill will take place in the House of Commons on 4 September 2019. The intention behind the Bill is to avoid a "no-deal" Brexit though it remains open to the Commons to eventually accept that as the outcome.  The Bill is explained in this Commons Library Paper issued 4 September.

The emergency debate on the No.6 Bill was followed by a statement from the Prime Minister in which he stated that a motion for an early general election would be tabled under the Fixed-term Parliaments Act 2011. To pass, such a motion requires a vote in favour by a number equal to or greater than two thirds of the number of seats in the House (including vacant seats).  It does not follow that the motion will pass because Opposition Parties expressed the view that they wish to see the No.6 Bill enacted before a general election is triggered.

It is interesting to consider whether getting the Bill enacted ought to be enough for the opposition parties to support a general election. They might be better to ensure that a general election will only be supported if an extension to Article 50 is secured.  This is because if the EU does not agree to a further extension then the UK will leave the EU on 31 October by operation of EU Law.

The substantive hearing of Cherry v Lord Advocate took place in the Court of Session before Lord Doherty.  The arguments put by counsel are set out in detail in this note by the Scottish Council of Law Reporting.

On 4 September, Lord Doherty ruled that the court could not review the exercise of the power to prorogue Parliament. An appeal is to be heard on Thursday 5 September.

Posted by ObiterJ at Wednesday, September 04, 2019