Two years after the EU Referendum an interesting constitutional question lingers - How did the UK decide to leave the EU?

Article 50.1 TEU  stipulates that - "Any Member State may decide to withdraw from the Union in accordance with its own constitutional requirements."  Then Art 50.2 - A Member State which decides to withdraw shall notify the European Council of its intention.  Art 50 defines the leaving process in EU law and the structure is clear enough and logical - decision followed by notification of the decision.  Also, as far as the EU is concerned, how a Member State decides to leave is a matter for the "constitutional requirements" of that State.

It is not surprising
that this has led to a search for the UK's constitutional requirements for such a major far-reaching decision?  UK constitutional law does not give a crystal clear answer but, given that sovereignty rests in law with the Queen in Parliament, one might have expected that Parliament, informed by the non-binding referendum and any other relevant factors, would have unambiguously made the actual final decision to leave.

There was a sequence of events beginning with the overall referendum vote to leave.  On 7th December 2016, the House of Commons passed a resolution (448 to 75) which included the words - "recognises that this House should respect the wishes of the United Kingdom as expressed in the referendum on 23 June; and further calls on the Government to invoke Article 50 by 31 March 2017.  Next came the judgment of the Supreme Court that, because of the impact on the rights of citizens,  notice to the EU had to be authorised by Act of Parliament - Miller / Dos Santos litigation.  The European Union (Notification of Withdrawal) Act 2017 was enacted and, on 29th March 2017, Mrs May gave notice, under Article 50 TEU, to the EU.

The search for the "decision" came before the High Court by way of an application for judicial review brought by the Article 50 Challenge.  The case is R (on the application of Webster) v Secretary of State for Exiting the European Union where, on 12 June 2018, Lord Justice Gross and Mr Justice Green refused permission to apply for judicial review to challenge the Brexit negotiations on the basis that the United Kingdom had, so it was argued, failed to make a valid decision to leave the European Union pursuant to Article 50(1). The Judgment is available here.  Though it is a judgment on a permission application, the judgment may be cited.  The neutral reference is [2018] EWHC 1543 (Admin).

One reason for the application being rejected was that it was ruled to be out of time.  A requirement of Judicial Review is that it is brought within a time limit set out in Civil Procedure Rules Part 54 Rule 5(1) - here.  Essentially, an application has to be made (a) promptly; and (b) in any event not later than 3 months after the grounds to make the claim first arose.  Here, the claim ought to have been submitted within the 3 months following 29th March 2017.  Although it was argued that the time should be extended, the court held that the time limit applied - see paras 19 and 20 of the judgment.

A further reason for rejecting the application was that there had been undue delay and that to grant the relief sought would give rise to the clearest possible detriment to good administration - see Senior Courts Act 1981 section 31(6)(a) - HERE.

The court could have left the matter there - out of time and that's it.  Nonetheless, the judges proceeded to state their views about the merits of the case - see paras. 11 to 18.  These are of interest even though, in the end, the court described the challenge as "hopeless" and "Totally without Merit."

The court cited the Supreme Court in Miller at para 82 - 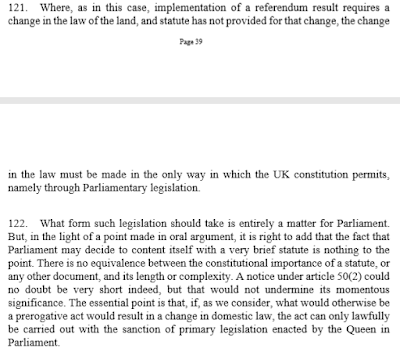 The High Court then noted that legislation duly followed - the European Union (Notification of Withdrawal Act) 2017 - and said (para 13) that the legislation was intended to give effect to the decision in Miller:

The crux of the judgment then comes at para 14 and 15:

15    Even putting the Referendum to one side, this is the language of decision not of notification alone, in vacuo, so to speak.  The Prime Minister's letter itself contains a decision; backed by the authority of the 2017 Act, that decision complies with the requirements of Miller.  No additional UK constitutional requirements remained to be satisfied.  I reject the argument that additional formality was required under the UK constitution or that there was any requirement for the Art.50(1) decision to be in some separate document from the Art.50(2) notification.

Para 17 should also be noted - "For completeness, it is noteworthy that the claimant has nowhere identified the body which, on its case, should take the "decision" to withdraw, which it contends remains lacking."

Thus, it appears that in the view of the court the Notification Act " encompassed the  power to take a decision to withdraw and conferred that power expressly on the Prime Minister" and "The Prime Minister's letter itself contains a decision; backed by the authority of the 2017 Act."

The Supreme Court in Miller had expressly made it clear that a short Act of Parliament would suffice to permit the Prime Minister to give the notice.  The 2017 Act recorded the UK's decision to leave and, in doing so, used the present tense - "The Prime Minister may notify, under Article 50(2) of the Treaty on European Union, the United Kingdom’s intention to withdraw from the EU."

There was no need for the Act to go further and state specifically that a "decision" had been made.  Parliament was stating that the UK intends to withdraw.

Interestingly, this "straightforward" reading is borne out by the statement of the Secretary of State for Exiting the EU who, on 31st January 2017, told the Commons that the Notificarion Bill was "simply about Parliament empowering the Government to implement a decision already made ..."

For my part, I do not share in any schadenfreude over the rejection of the Article 50 Challenge.  The UK's constitutional arrangements are notoriously vague in too many areas and even the most fundamental constitutional reforms can be made by enacting ordinary legislation with MPs being "whipped" to vote on Party lines.  It would be preferable to have greater clarity about how major constitutional changes (such as leaving the EU) are to be both decided and implemented.

An appeal against the refusal is under consideration by the Article 50 Challenge.

A further article on this judgment is to be found on the Monckton Chambers - Brexit blog.

a)  23rd June 2016 - the referendum on EU membership was held and the result is shown at BBC News.

b)  The referendum was held under the European Union (Referendum) Act 2015 which contained nothing to make the outcome of the referendum binding in law.

That this House recognises that leaving the EU is the defining issue facing the UK; notes the resolution on parliamentary scrutiny of the UK leaving the EU agreed by the House on 12 October 2016; recognises that it is Parliament’s responsibility to properly scrutinise the Government while respecting the decision of the British people to leave the European Union; confirms that there should be no disclosure of material that could be reasonably judged to damage the UK in any negotiations to depart from the European Union after Article 50 has been triggered; and calls on the Prime Minister to commit to publishing the Government’s plan for leaving the EU before Article 50 is invoked, consistently with the principles agreed without division by this House on 12 October; recognises that this House should respect the wishes of the United Kingdom as expressed in the referendum on 23 June; and further calls on the Government to invoke Article 50 by 31 March 2017.  [Emphasis added].


d)  Did Royal Prerogative powers relating to the making (and unmaking) of treaties permit the government to give notice to the EU - under Article 50 TEU - that the UK had made a decision to leave.  This question was raised in the Miller / Dos Santos litigation with the outcome that the Supreme Court ruled (8 to 3) that an Act of Parliament was required to authorise ministers to give Notice of the decision of the UK to withdraw from the European Union.

"The Prime Minister may notify, under Article 50(2) of the Treaty on European Union, the United Kingdom’s intention to withdraw from the EU."

The second reading in the Commons took place on 31st January and 1st February 2017.  On 2 February 2017, the Government published its white paper, The United Kingdom’s Exit From, and New Partnership With, the European Union.

According to the Research Briefing on the 2nd reading in the Commons:


f)  The Prime Minister exercised this power on 29th March 2017 - generally referred to as "triggering Article 50" - see the letter from the PM to the President of the European Council (Mr Donald Tusk).