Brexit - Two years on and the shambles continues

Two years after the EU referendum we continue to stumble onwards into the largely unknown world of post-Brexit.  Here is a woeful story of governmental incompetence.  The economic prognosis does not look good - see the analysis by the Centre for European Reform - What's the cost of Brexit so far?  - and the announcement by Airbus- and the views of BMW - BBC News 22nd June - and Siemens - Guardian 23rd June.  Complex issues regarding important sectors such as aviation remain to be solved and the almost intractable problem of the border between Ireland (in the EU) and Northern Ireland (out of the EU) has not yet achieved an agreed solution.

During the first day of the second reading debate on the Notification Bill, MPs from all sides of the House questioned the Government about when it would publish the white paper that had been promised by Theresa May at Prime Minister’s Questions on 25 January 2017. Mrs May announced on 1 February, before the second day’s debate on the Bill began, that the white paper would be published the following day.  On 2 February 2017, the Government published its white paper, The United Kingdom’s Exit From, and New Partnership With, the European Union  White Paper.

Thus, MPs voted to trigger Brexit without having in place a White Paper let alone any democratically agreed plan.

This shambolic handling of matters has characterised Brexit from the outset as evidenced by the handling, only in the last two weeks, of the European Union (Withdrawal) Bill discussed in previous posts HERE and HERE .  MPs abandoned an opportunity, secured in the House of Lords, for them to have a truly meaningful vote in the event of no deal being the outcome.

Since March 2018, a DRAFT Withdrawal Agreement has been in place and it contains provision for a transition / implementation period lasting until 31st December 2020.  On 19th June 2018, the UK Government and EU issued a Joint Statement on Withdrawal Agreement - 19th June 2018 and negotiations over the withdrawal agreement are on-going.  The EU Council meets on 28th and 29th June and will discuss, in an EU27 format,-
It won't be until after the EU Council that the UK government issues a further White Paper on the future of UK-EU relations - The Independent 9th June - "Warring cabinet ministers will be summoned to another Chequers “away day” when Theresa May will try to end bitter infighting on plans for Brexit.  The prime minister has confirmed that a detailed white paper – designed to give the UK the initiative in the troubled talks – has been shelved until next month, because of the disagreements.  She will now host a second lengthy lock-in at her country residence to try to enforce order, replicating the get-together when her Brexit strategy was on the rocks in February."

It's clear that some form of planning is going on within government for a no deal Brexit - The Independent 3rd June - but nobody outside of the government machine knows much about this.  Business is unable to plan and, naturally enough, is looking at the worst-case scenario.  Little wonder then that we are seeing statements from businesses such as Airbus.  See Portland Communications - Is Britain ready for no deal?

Muddling along without any agreed coherent plan and enormous uncertainty for the future.  That's where we are two years down the line.  It is not a happy place to be and even those favouring Remain ought to be getting concerned by now and insisting that a sensible deal be reached and a sensible plan if it cannot be.  The nation deserves no less.


The announcement from Airbus may be downloaded from their website - Airbus in the UK - see Brexit Risk Assessment Memorandum - "Customs Union and a harmonized regulatory framework with the EU on aviation are the two major issues for Airbus that will determine its future strategy in UK, and they need to be addressed urgently." 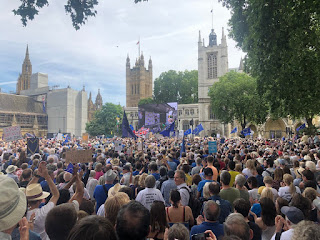 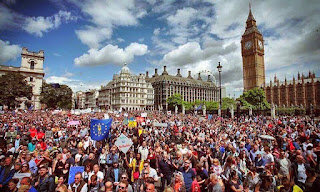