The previous post looked at the situation regarding the promised "meaningful vote" on either a Withdrawal Agreement negotiated with the European Union as part of the Article 50 process or the failure to achieve such an agreement.  As part of the the "ping pong" process relating to the European Union (Withdrawal) Bill the Lords amendments returned to the Commons on 20th June.

Few objective observers could conclude that the proceedings on 20th June were satisfactory.  They are described by Metro News 21st June - "UNWELL and heavily pregnant MPs had to endure three hours of parliamentary debate to save Theresa May’s Brexit Bill — in defiance of Commons convention.   A clearly ill Labour backbencher Naz Shah was helped into Westminster in a wheelchair clutching a sickbowl after spending the last three days in hospital.   Her party colleague, Laura Pidcock, who is heavily pregnant, was also there, as was Lib Dem deputy leader Jo Swinson despite being past her due-date, and amid protests by other MPs."

But what happened regarding the Bill?
A further amendment was put forward - see

The Secretary of State for Exiting the EU (Mr David Davis MP) issued a statement setting out the government's understanding of the way in which a reference to "in neutral terms" will operate in practice.  The Speaker will decide whether a motion put forward by government is or is not cast in neutral terms.  Davis' statement concluded by saying that MPs are able to table motions on and debate matters of concern and "that, as is the convention, parliamentary time will be provided for this." 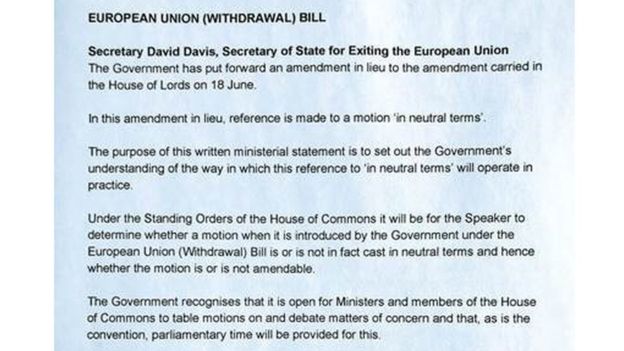 The statement was, it seems, enough to swing the vote the government's way.  Mr Dominic Grieve QC MP,  who had favoured the Lords amendment,  decided to vote with the government after all.  However, his work had focussed attention on the need for addressing what "meaningful vote" was to actually mean.

How crucial is this?

It remains to be seen exactly how crucial any of this will eventually be.  The Commons will have the right to accept or reject the Withdrawal Agreement.  If they reject it, they will then consider a motion in neutral terms relating to the government's plans.  (Similarly, if no withdrawal agreement can be reached).  This is certainly a much weaker position than the Lords amendment would have required.   Even so, MPs will be able to state their views in any debate on the Ministerial statement and, at least according to the Davis statement, will be able to table further motions for debate.  This might prove to be somewhat illusory given the government's grip on the parliamentary timetable.

It is to be hoped that the on-going negotiations produce a withdrawal agreement and framework for the future relationship with the UK which will be acceptable.  The draft withdrawal agreement (March 2018) provides for an implementation (or transition) period lasting until 31st December 2020. - (Article 121 of the draft agreement).  Nevertheless, a no agreement scenario cannot be ruled out as demonstrated by the Speech of  Jean Claude Juncker to the Irish Parliament - (21st June).  Mr Juncker said - "... As the clock ticks down to Brexit, we must prepare for every eventuality, including no deal. This is neither a desired nor a likely outcome, but it is not an impossible one and we are getting ready just in case ..." Also, there are serious concerns within business at the prospect of no deal - BBC News 22nd June.

Parliament has much more legislation to consider and this includes the yet to be introduced Withdrawal Agreement and Implementation Bill.

Having been amended again, the Bill was "ponged" back to the Lords where, in the evening of 20th June, the amended version was agreed - read the proceedings and note the unhappiness at the fact that the Bill was taken to the Lords the same evening before members had the chance to read the Hansard account of what was said in the House of Commons just three hours before.   The "ping-pong" process was completed and the Bill now requires Royal Assent to become an Act of Parliament.

The Bill was introduced into the Commons on 13th July 2017 and took some 250 hours of Parliamentary time over a period of almost a year.  The Bill - as first introduced - was the subject of earlier posts - HERE.  It has come a considerable way since then.

During the passage of the Bill, the government has been at odds with the Lords and some of its own MPs over what happens if the UK cannot reach a deal with the EU - or if MPs reject whatever deal is agreed.

A)  The UK Government and EU issued a Joint Statement on Withdrawal Agreement - 19th June 2018.  Negotiations are on-going.

B)  The EU Council meets on 28th and 29th June and will discuss, in an EU27 format,-
C)  On 20th June, Mr Guy Verhofstadt (Brexit Coordinator and Chair of the European Parliament Brexit Steering Group) gave evidence to the Exiting the EU Committee - this may be viewed via this link.

D)  The High Court published its reasons for rejecting an application for judicial review brought by the Article 50 Challenge.   The full Divisional Court judgment can be found here - [2018] EWHC 1543 (Admin) - and the discussion at Monckton Chambers - Brexit blog.

An MP was wheeled through the voting lobbies, high on morphine and carrying a sick bucket, the moment Brexit lost the dignity it never had | The Independent https://t.co/GH5EzpT5xP
It's the UK that's sick, & we all need a sick bucket.
— Sue Wilson #FBPE (@Suewilson91) June 20, 2018