Lord Dyson to be Master of the Rolls 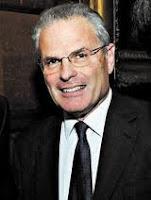 Lord Dyson - presently a Justice of the Supreme Court - will become Master of the Rolls on 1st October 2012 - Announcement from No. 10.   This is an ancient office but, in modern times, the Master of the Rolls presides over the Court of Appeal (Civil Division) and is Head of Civil Justice - see Judiciary website.

Also on 1st October, the present Master of the Rolls (Lord Neuberger) becomes President of the Supreme Court - (earlier post).

Lord Dyson's move will open up another vacancy on the Supreme Court - see UK Supreme Court blog.  In addition, Lords Hope and Walker are due to retire in 2013.  (Article in The Guardian 19th July by Joshua Rozenberg).

Lords Bingham, Woolf and Phillips also held the office of Lord Chief Justice of England and Wales.  Lord Clarke is now a Justice of the Supreme Court.

Biographies of the Justices of the Supreme Court.
Posted by ObiterJ at Sunday, September 02, 2012