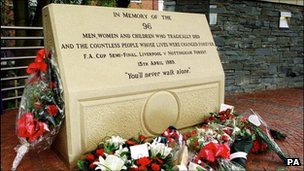 The Hillsborough Independent Panel Report has been published.  It is a lengthy document of 389 pages but a summary may be read at pages 3 to 26.

In the House of Commons, the Prime Minister made a statement and offered the families of the bereaved an unreserved apology - (The Guardian 12th September - Hillsborough disaster: David Cameron apologises for double injustice).  Mr Cameron referred to the report as "deeply disturbing." He emphasised many of the Panel's findings such as the poor state of the stadium at Hillsborough, the failure of the authorities to protect people adequately, the incorrect blaming of the Liverpool fans, the alteration of statements in the possession of South Yorkshire Police, the fact that the Police ran Police National Computer checks on the dead with a view to impuning them, that blood was tested for alcohol including even the blood of children and that the 'deeply controversial' inquest was inadequate.  In particular, there was evidence to show that the 3.15 pm time limit imposed by the Coroner was fundamentally flawed.

The inquest reached verdicts of accidental death and the Panel's report does not have any legal effect on the verdict.  However, the Attorney-General may apply to the High Court for the formal inquest finding (referred to as "the inquisition") to be quashed and for a new inquest to be ordered - Coroners Act 1988 section 13

Whether to make such an application is a matter for the independent judgment of the Attorney-General.  In the event that such a request is made to the court it will be for the court to determine whether a new inquest will be ordered.

A debate on the Independent Panel's report is to be held in Parliament in October.

Writing in The Guardian 12th September, Joshua Rozenberg argues that the families now have the truth but justice may take longer.  He considers whether there could be a new Inquiry or a new inquest and the possible delay to starting those should any criminal investigations be commenced or prosecutions be brought.  It may be a little early to speculate on such matters since the report is very lengthy and is supported by over 450,000 pages of material.   Mr Cameron was right to say to other MPs that it is necessary to study the report in detail first.

Notes and other material:

The Shipman Inquiry report took an extensive look at Coroners and made radical recommendations.  The force of the Shipman report was recognised by the previous (Labour) government which brought foward the Coroners and Justice Bill.

As and when implemented, Part 1 of the Coroners and Justice Act 2009 will make extensive changes to the system.  At the moment, most of Part 1 has not been implemented and the reform process has become extremely untidy - see Inquest.   In May 2012 the government finally appointed Judge Peter Thornton QC as Chief Coroner and he takes up the appointment on 17th September 2012 - (Ministry of Justice announcement).   The coalition government spent quite some time considering whether to proceed with the appointment of a Chief Coroner.  The Job Description is here.

The governance of Britain: consultation on the role of the Attorney General - 2007 - a very useful document for those who wish to know more about the Attorney's role.

Posted by ObiterJ at Wednesday, September 12, 2012