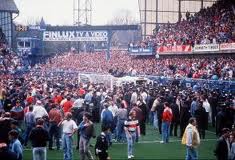 The Hillsborough debate in Parliament was held on 17th October 2011.  During the debate, the Home Secretary (Rt. Hon. Theresa May MP) clearly stated that the government would do all in its power to establish the truth and fully supported the independent panel under the chairmanship of the Bishop of Liverpool.  No government papers would be withheld.  The panel would oversee disclosure of documents and would report on its work.  The right way forward was for government to release documents to the panel and the families should see them before the public.  There would be full disclosure - uncensored and unredacted save for any redaction considered necessary by the panel after liaising with the families - e.g. to withhold information personal to particular victims.

Today, government papers about the Hillsborough disaster that have remained hidden from the public eye will be released. They are expected to shed more light on what happened on the 15 April 1989, when 96 Liverpool fans died in a crush on the terraces of Sheffield Wednesday’s ground during a FA Cup semi-final between Liverpool and Nottingham Forest.  The Hillsborough Independent Panel has scrutinised 400,000 pages of documents for the past 18 months and will issue its report today, with victim’s families being given first access at Liverpool’s Anglican cathedral.

The events at Hillsborough on 15th April 1989 (and certain other disasters) eventually led to major improvements to sports facilities.  Hillsborough also generated an interesting legal legacy concerning - (a)  cases in tort for negligently caused psychiatric illness and (b) the withdrawal of medical treatment (the "Tony Bland" case) - for further see "The Hillsborough disaster and its legal legacy" (written in April 2009).

Who are the members of the Hillsborough Independent Panel - Liverpool Echo 12th September.
Posted by ObiterJ at Wednesday, September 12, 2012