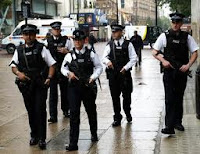 It is a very moot point whether this reform is necessary and whether reform of the Police Authorities might have been more appropriate.  According to their consultation, the government sees the Police as "disconnected from the public they serve."  As for cost, The Guardian 1st December suggests that it will cost £130 m in the first year to set up the new Police and Crime Commissioners. After that, there will be the on-going costs of periodic elections not to mention the staff they are likely to require.  The Guardian quotes Home secretary Theresa May as saying that the Commissioners will cost no more than the Police Authorities.
Part 2 amends the Licensing Act 2003. Licensing authorities, the Police and Local Authorities will have responsibility for controlling noise nuisance and "communities" will have a greater say in licensing decisions.
Part 3 is aimed at creating a new legal regime for controlling Parliament Square, London and the surrounding area.  Sections 132 - 138 of the Serious Organised Crime and Police Act 2005 will be repealed.  The effect of that will be that Public Order Act 1986 s.14 will then apply.  The Bill will require considerable scrutiny here.  It is not unknown for a more restrictive regime to be brought in under the guise of reform.  [See Brian Haw's website].
Part 4 deals with the question of issuing arrest warrants on the application of a private prosecutor in relation to certain offences.  The actual offences are listed in Clause 151 which will, once enacted, insert sections into the Magistrates' Courts Act 1980.  This matter arose when certain Palestinians sought a warrant for the arrest of former Israeli Foreign Minister Tzipi Livni - see BBC 15th December 2009.  The consent of the DPP will be required before a warrant can be issued.
Part 4 also contains some provisions relating to the Misuse of Drugs Act 1971 and also powers of seizure under certain local government byelaws.
Part 5 deals with matters such as commencement.  The Act will mainly extend to England and Wales only though some provisions will also extend to Northern Ireland and Scotland.

Media comment:  The Telegraph 1st December "Police Commissioners could get their own political advisers" .... "Parliament Square to be cleared for Royal wedding" .... "Top prosecutor to approve arrest of foreign officials"
Posted by ObiterJ at Wednesday, December 01, 2010