"The Queen devoted her life to us" - Australian High Commission, London

On 8 September 2022, at Balmoral, Her Majesty Queen Elizabeth II died.

Only two days previously, Her Majesty appointed Elizabeth Truss as Prime Minister of the United Kingdom.

The Queen's long life was marked by her unparalleled sense of duty earning her respect across the world.

HRH Prince Charles became King at the moment of Her Majesty's death and will reign as King Charles III.

The Queen was a "Constitutional Monarch" and, as such, she had "the rights to be consulted, to encourage and to warn" - (Walter Bagehot "The English Constitution" 1867). In practice, the monarch exercises most of the legal powers of the Crown through the government. Various constitutional conventions surround the exercise of those powers.

It was notable that many tributes from politicians referred to the extent to which they valued their audiences with the Queen. Canada's Prime Minister, Justin Trudeau, said that he would "miss those chats" and added that the Queen was "one of my favourite people in the whole world."

Demise of the Crown:

Various events of constitutional interest will take place over the coming days including an Accession Council, tributes in Parliament, formal proclamations, and a State Funeral.

A Coronation will take place for the King on a date yet to be announced though, in law, the succession of the monarchy to Charles has now taken place. Coronation is a ceremony with ancient rituals. It is likely to be held in 2023 at Westminster Abbey though the ceremony and pageantry are unlikely to be on the large scale of 1953 during the austere years following World War 2.

The Second Proclamation of King Charles III is announced in London | UK News | Sky News - this proclamation was read by Clarenceux King of Arms.

On Sunday 11 September, the late Queen's body was taken by road from Balmoral to Holyrood, Edinburgh. The journey is approximately 180 miles and took 6 hours. 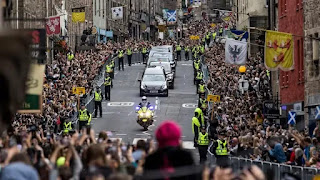 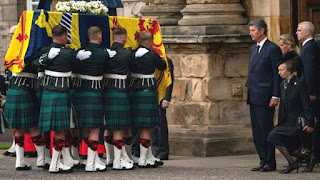 During the afternoon the Queen's coffin was taken from Holyrood to St Giles Cathedral, Edinburgh where a Service of Thanksgiving was held with King Charles present and other members of the Royal family. The Queen to "Lie at Rest" in the Cathedral for about 24 hours. 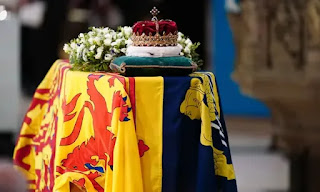 In the evening, the King together with Princess Anne, Prince Andrew and Prince Edward stood alongside their mother's coffin in St Giles Cathedral. 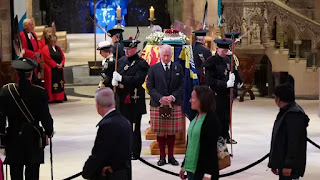 Around 33,000 people are reported to have viewed the Lying in Wait at St. Giles, Edinburgh.

During the afternoon, the Queen was taken from St Giles to Edinburgh Airport and then flown by the Royal Air Force to RAF Northolt. From there the coffin was taken by road to Buckingham Palace arriving around 8 pm. 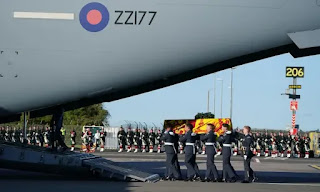 King Charles III held a Privy Council meeting at which Penny Mordaunt MP was declared as Lord President and other Ministers were sworn - List of Business - 13th September 2022 (independent.gov.uk). [Interestingly, Mordaunt presided at the Accession Council held on 10 September].

The Queen was taken from Buckingham Palace to Westminster Hall for the Lying in State which will last until the State Funeral on Monday 19 September 2022. 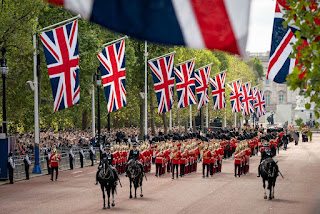 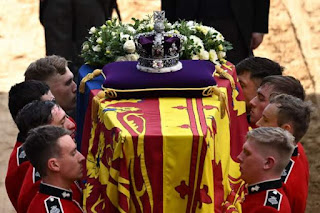 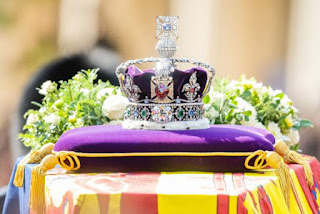 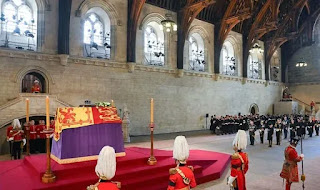 The Lying in State was from Wednesday 14 September to Monday morning 19 September 2022. Westminster Hall closed at 0630 BST prior to the State Funeral.

The State Funeral took place at Westminster Abbey, followed by a procession to Wellington Arch. The Queen was then taken to Windsor where a service of committal was held in St George's Chapel.

During the evening, at a private service, the Queen was interred in the King George VI Memorial Chapel.

The Lone Piper at Windsor

Toward the end of the committal service, the Imperial State Crown, the Orb, and the Sceptre were taken from the coffin and placed on the altar. This was a symbolic demonstration of the monarchy transferring from Queen Elizabeth to King Charles.

The Commonwealth Secretary-General commented - "Her Majesty was the epitome of duty, stability, wisdom and grace."