The Privy Council held an "Accession Council" on 10 September - Explanation of the Accession Council - Privy Council (independent.gov.uk)
The Accession Council divided into two parts - The Accession Council - Business.
During the second part of the Council, The Sovereign Grant Act 2011 (Duration of Sovereign Grant Provisions) Order 2022 was made.
This is an important Order basically ensuring that the Treasury (i.e. the government) gets a great deal of money for the duration of the reign of King Charles III and for 6 months beyond.
The Sovereign Grant Act 2011 deals with how Royalty in the UK is funded in modern times. Section 16 of the Act provided that "Sovereign Grant provisions" ceased to have effect 6 months after the end of the reign of the Queen. The section goes on to provide for an Order in Council to be made to ensure that the sovereign grant provisions in the Act apply during, and for 6 month beyond, a new reign.
Guidance:
Guidance on the Sovereign Grant Act 2011 is published by the government and was updated on 9 September 2022.
There is a single grant supporting the monarch's official business. It meets the central staff costs and running expenses of the Royal household - including official receptions, investitures and garden parties. It also covers maintenance of the Royal Palaces in England and the cost of travel to carry our royal engagements.
In exchange for the Sovereign Grant, the King surrenders the revenue from The Crown Estate to the government. The grant for 2022-23 is set at £86.3 million. Normally the size of the grant for a given year is equal to 25% of the Crown Estate's profit for the financial year two years prior to the year in question.
The Crown Estate is the property of the Sovereign “in right of the Crown”, as set out on the website of The Crown Estate.
The guidance notes that, since 1993, Queen Elizabeth and Prince Charles (as Prince of Wales) paid tax voluntarily in accordance with a Memorandum of Understanding on Royal Taxation.
Sovereign Grant accounts - GOV.UK (www.gov.uk)
Taxation:
The taxation position is addresssed in the Memorandum of Understanding on Royal Taxation - paras. 1.2 to 1.4  - 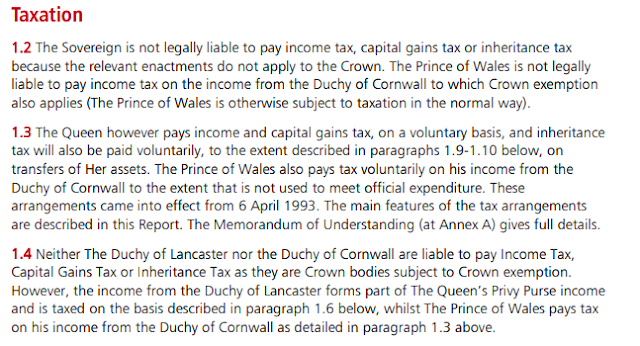 Duchy of Cornwall:
The Duke of Cornwall is now Prince William. The Duchy of Cornwall is a private landed estate created by Charter in 1337 when Edward III granted it to his son and heir, Prince Edward (the Black Prince) and all his subsequent heirs. It provides each Duke with an income from its assets.

The estate comprises primarily agricultural, commercial and residential property, in addition to which the Duchy has a portfolio of financial investments. The Duchy consists of around 52,971 hectares of land in 23 counties, mostly in the South West of England. For more details, please visit the official website for the Duchy of Cornwall.

Section 9 of the Sovereign Grant Act 2011 deals with income from the Duchy of Cornwall.

Duchy of Lancaster:
The Duchy of Lancaster is a private owned by the King as Duke of Lancaster. The rural estates consist of 18,481 hectares of land in England and Wales and comprise commercial, agricultural and residential properties, the majority of which are in Lancashire, Yorkshire, Cheshire, Staffordshire and Lincolnshire.
The Duchy also has a significant commercial property portfolio largely in the Savoy precinct off the Strand in London, a portfolio of financial investments and a small urban residential portfolio.
At the end of March 2022, the Duchy of Lancaster had £652.8m of net assets under its control, delivering net surplus of £24.0m.
The Duchy publishes financial information - https://www.duchyoflancaster.co.uk/financial/ - and notes that "The Sovereign voluntarily pays tax on the income" received from the Duchy of Lancaster.
Further Links of interest:
House of Commons Library Briefing - Finances of the Monarchy - 25 July 2017
Royal Finances | The Royal Family
Crown Estate Scotland
Law and Lawyers: Queen's or Prince's Consents (obiterj.blogspot.com)
The vast wealth Charles inherits now he is king and why he doesn't pay inheritance tax - Wales Online
The Crown Estate: The mysterious property empire behind Queen Elizabeth II | Business | Economy and finance news from a German perspective | DW | 09.06.2021
Posted by ObiterJ at Sunday, September 18, 2022