The 'dignified' constitution and where State power lies 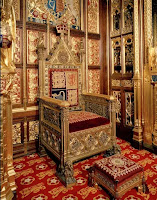 A right to be consulted, to encourage, and to warn.
Walter Bagehot lived from 1826 to 1877. In 1867, his book "The English Constitution" was published.

Bagehot examined the British system of government and offered his answer to the question of where real power was exercised.

Bagehot pointed to a difference between what he called the 'dignified' aspects of the constitution and its 'efficient' aspects.

After the Reform Act 1832, the House of Commons was elected

on a very different basis to previously but, in 1867, universal adult franchise lay well into the future. Also, until the Parliament Act 1911, the House of Lords held an absolute right of veto over all legislation.  Membership of the House of Lords was entirely hereditary and that remained the case for almost a century after the publication of Bagehot's book - Life Peerages Act 1958 - UK Parliament

Bagehot's book essentially described what we now refer to as Constitutional Monarchy in which legal powers of the Crown are, in practice, exercised on the "advice" of Ministers. Constitutional convention requires the Monarch to follow that "advice."

The Prime Minister has frequent 'audiences' with the Monarch at which, as Bagehot wrote, the monarch has the rights to be consulted, to encourage, and to warn. Many Prime Ministers have described their meetings with the monarch as valuable and have spoken of 'wise counsel and support' - Labour and monarchy | Richard Johnson | The Critic Magazine

Since the death of the Queen we have seen the 'dignified' part of the constitution on display.

King Charles III - (as he chose to be known) - succeeded to the Crown immediately his mother died.

The Privy Council is a link between the executive powers of Ministers and the constitutional authority of the monarch. It held an Accession Council which, in a welcome development, was televised. A large number of individuals attended including six former Prime Ministers. The latter was a reminder that individuals are appointed Privy Counsellors for life. Perhaps that is a point for reform.

The Accession Council was followed by Proclamations at St James' Palace and elsewhere.

Then came the Lying in State from 14 to 19 September in the ancient and beautiful Westminster Hall.

A State Funeral takes place on Monday 19 September and the Queen will be interred at Windsor alongside her late husband Prince Philip.

A Coronation seems likely to be held in 2023 though it is perhaps unlikely to be on the same scale as 1953.

Whilst we can find much to criticise, there is considerable value in a constitutional monarchy in which the Head of State does not have great personal powers and who can remain above the political turmoil of the day.

Bagehot's book is hardly mainstream reading today but it offers a useful reminder that, for all the ceremony and trappings of grandeur surrounding the monarchy, true power lies with the government.

Whether that power is used wisely by politicians is a matter to which the electorate ought to pay much greater attention and it is the body-politic at Westminster where reform is required the most.

Privy council | The Institute for Government

When was the last state funeral in the UK

The Queen's Beasts - Wikipedia - at the Queen's Coronation in 1953, ten statues of heraldic beasts were placed at Westminster Abbey. Those are now in display in the Canadian Museum of History in Gatineau, Quebec. There are copies in Kew Gardens. It was during the reign of Henry VIII that statues of the 'beasts' first appeared at Hampton Court Palace.