A previous post sets out links to the Parliament - the Police, Crime, Sentencing and Courts Bill.

The Bill covers numerous areas of law and its Second Reading debate will take place in the House of Commons on Monday 15 and Tuesday 16 March 2021. This is the first of two posts looking at Part 3 of the Bill - Public Order.

Taken as a whole, the reforms in Part 3 will make further and considerable inroads into the ability of the citizen to protest without actually breaking the law in some way.

It is now almost 6 years since the Law Commission made recommendations about public nuisance - see the report published 25 June 2015.

At present, public nuisance is an offence at common law. It has been trundled out on several occasions in recent years in order to bring criminal charges against various protesters. Notable examples are the Preston Fracking Protesters - posts 29 September 2018 and 27 October 2018 - and the Trenton Oldfield case (post 27 October 2012).

The fracking case saw three anti-fracking activists (Simon Roscoe Blevins, Richard Roberts, and Rich Loizou) jailed for public nuisance.  Blevins and Roberts were each imprisoned for 16 months and Loizou was jailed for 15 months.  The Court of Appeal (Criminal Division) allowed appeals against the sentences - [2018] EWCA Crim 2739.

According to the government, Clause 59 of the Bill implements the Law Commission recommendation and will "provide clarity to the police and potential offenders, giving clear notice of what conduct is forbidden." - see Factsheet on Protest Powers.

As is so often the case, the devil is in the detail of Clause 59. 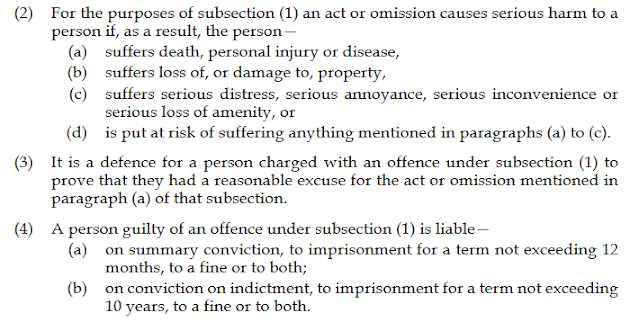 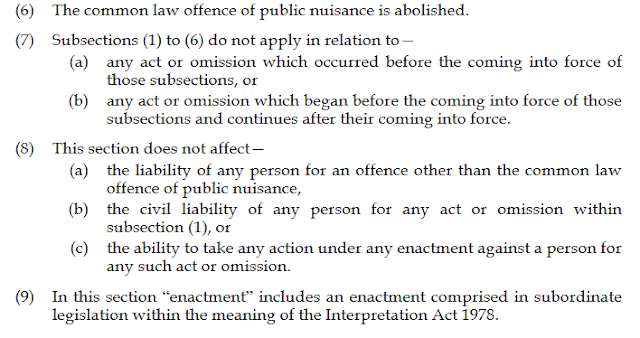 A wide range of conduct potentially falls within the offence and the offence will extend to causing serious "annoyance" or serious "inconvenience" or serious "loss of amenity." Therefore, even though the word "serious" appears, the threshold for the harm caused is not particularly high and it will hardly be too difficult for those affected by a protest against some activity to claim that serious annoyance or inconvenience has been caused.

Further, there need not even be actual serious annoyance etc.but only a risk of it arising.

The proposed offence will require proof of intention that the act or omission will have a consequence mentioned in clause 59(1)(b) or the individual must have been reckless as to whether it should have such a consequence.

On one level, reforming public nuisance addresses a 6 year old Law Commission report but it is disingenuous to claim that this reform will "give clear notice of what conduct is forbidden." It will do no such thing. The reform appears to be capable of criminalising any protest against an activity no matter how controversial the activity might be.

Members of Parliament ought to consider very carefully whether this particular reform should proceed to the statute book.

Reforming public nuisance is not the only public order matter considered by Part 3 of the Bill. A subsequent post will look at further clauses in Part 3.