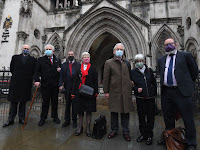 A previous post - 10 December 2015 - looked at the on-going campaign to get the convictions of the "Shrewsbury Pickets" quashed.

In 1972, there was a national strike by the building workers’ trade unions which lasted from late June to mid-September. The strike concerned the long hours and low pay of craftsmen and labourers.  The building industry was one where employment was precarious due to the "lump system" by which workers were employed on a job-by-job basis giving them little or no long term security.

flying pickets targeted at building sites in small towns and rural areas.  On 6 September 1972 such picketing took place in the Shrewsbury area. The picketing was largely peaceful, and no arrests were made or complaints raised by the police following the strike action on this day.

Some months following the conclusion of the strike, a number of the picketers involved in the Shrewsbury action were arrested and charged with unlawful assembly and conspiracy to intimidate.

Three separate trials took place at the Crown Court in Shrewsbury. The 1st trial involved 6 defendants and was held from 3 October 1973 to 19 December 1973 before Mr Justice Mais and a jury.  Trial 2 involved 9 defendants and took place from 14 January 1974 to 13 February 1974 before His Honour Judge Chetwynd-Talbot and a jury. Trial 3, of a further 9 defendants, took place from 26 February 1974 to 22 March 1974 before HHJ Chetwynd-Talbot and a different jury.

Reference to Court of Appeal:

47 years after the conclusion of the trials, convictions were quashed by the Court of Appeal (Criminal Division) - R v Dennis Michael Warren and others [2021] EWCA Crim 413 - Fulford LJ, Andrew Baker and Goose LJ.

The convictions were appealed on two grounds:

(1)  It appeared that handwritten witness statements made by some of the civilian eyewitnesses were destroyed during the early stages of the proceedings, for which substitute statements were provided. This was not revealed to the accused, who, along with the judge in the first trial, were seemingly reassured that they had had access to all the statements, including those which the prosecution had no obligation to disclose under the law and practice that existed at the time.

(2) On the same day that the prosecution closed its case in the first trial, a programme entitled "Red under the Bed" was broadcast on national media and it was suggested that this was highly prejudicial to the appellants, thereby undermining the safety of the conviction.

The appellants succeeded on Ground 1 but did not succeed on Ground 2 relating to the Red under the Bed programme.

Mais J directed the jury - simply saying - "You will not be dissuaded or allow your judgment to be influenced by outside considerations."

The court's analysis relating to Red under the Bed is at paragraphs 88 to 98. The court concluded by saying - "Given the political climate of the early 1970s and the clear issues in the case, we are confident that any juror who saw this programme would not have been prejudiced against the appellants as a consequence. They would have understood that it was essentially and avowedly polemical, and that it was unrelated to the decision that had to be made as regards each accused: were they sure the defendant they were considering had been involved in the criminality reflected in one or more of the counts on the indictment."

With respect, based on my own recollections from those distant days, I would be much less sure of this.  This programme, shown before the trial had concluded, might well have influenced some jurors to adopt an anti-Trade Union view. In the early 1970s and afterwards, the actions of "flying pickets" received massive publicity and, for many people, it was an unpopular tactic. This article about the tactics used by strking miners is of interest.

The appellants submitted that the judge did not take sufficient steps to ensure that the adverse publicity did not undermine the fairness of the proceedings. It was argued that he should have enquired as to whether any of the jurors had viewed the programme and, if this was the case, they should either have been discharged or given robust directions to ensure that they did not allow any prejudice created by the programme to affect their verdicts - (see para 93).

The Court of Appeal (at para 88) commented - "There is no doubt, in our judgment, that in 2021 the court and the parties would take steps to seek a postponement of the broadcast of a programme such as Red under the Bed until after the trial, given it involved consideration, in an uncompromising format, of some of the political issues underpinning the national building workers' strike that was clearly relevant to the ongoing trial. Alternatively, as with contemporary internet material, the jury would be directed not to view it and they would be given a robust direction not to undertake any research and to disregard any potentially prejudicial material that they might encounter that touched on the issues in the case."

The court ended its judgment with an interesting observation about court records - paras 101-3.