What is a valid certificate of motor insurance? 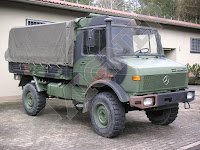 Almost 11 years ago I blogged about the Police power to impound vehicles - Post February 2010.

The Road Traffic Act 1988 sections 165A and 165B empower a Police Officer in Uniform to seize vehicles in certain circumstances  - e.g. is a driver is asked to produce evidence that he has a driving licence or that the vehicle is insured and the driver is unable to do so.  Reasonable force may be used to seize the vehicle.

(a) the removal and retention of motor vehicles seized under section 165A; and (b) the release or disposal of such motor vehicles.  The current Regulations are the Road Traffic Act 1988 (Retention and Disposal of Seized Motor Vehicles) Regulations 2005.

Mrs Astrid Linse had her Mercedes Benz Unimog U1300L impounded on 28 October 2019. At the time she was unable to prove that the vehicle was insured.

Mrs Linse then applied to NFU Mutual to add the vehicle to an existing insurance policy and it was added from 19 December 2019. Mrs Linse was told by a Police Sergeant that, if she took the new insurance document to the police station, she would be able to recover the vehicle. (Recovery and storage charges apply).

The Police refused to release the vehicle arguing that Mrs Linse had not produced a "valid certificate" of insurance. Mrs Linse challenged the decision by way of judicial review.

Knowing of the challenge, the Police nevertheless auctioned off the vehicle.

The High Court held that the policy in question was VOIDABLE - that is, it could be set aside by the insurer but is valid until the insurer does so.  NFU did not do this until May 2020. At the time the certificate was presented to the Police it was a valid certificate.The Police Officers, in taking into account that the insurer may have grounds to avoid the policy, took into account immaterial matters.

The result was that Mrs Linse was entitled to succeed in the judicial review. It is possible to award damages and, at a separate hearing, the court decided that question - R (Astrid Linse) v Chief Co0nstable of N. Wales [2020] EWHC 3403 (Admin).

How damages are assessed in a particular case involves both points of law and fact. For example, what forms of loss can properly be the subject of an award of damages.  There can also be questions of fact which the court has to decide. Such issues arise in many cases every year and Jarman QC's judgment is worth reading fully as it shows how a court decides such questions.

The outcome was that Mrs Linse was awarded damages for the market value of the vehicle (assessed at £25,000) and also for the loss of certain items which had gone missing. There was no award for loss of income (see paras 33-36) and no award for emotional upset (para 38).

The Police had informed Mrs Linse that the NFU certificate of insurance was valid and that she could recover the vehicle but, despite this, PC Kirkby made enquiries of the NFU and decided that the certificate was not valid. That decision was incorrect in law. Jarman QC noted (para 40) that it was not clear whey PC Birkby did not comply with the instruction of the Police Sergeant but, in Jarman QC's judgment, that conduct was arbitrary by a servant of the government.

As such it came within the first category of cases where it is appropriate to award exemplary damages laid down by Lord Devlin in Rookes v Barnard [1964] AC 1129.

Exemplary damages are most commonly ordered against the police in false imprisonment and malicious prosecution cases, typically in a wide range of awards from hundreds of pounds to tens of thousands of pounds. This case was not as serious as most of those but the failure to return the vehicle had a significant impact upon the freedom of Mrs Linse and her husband to return to Germany, to follow their chosen lifestyle and to sell their artwork.

The judge ended by saying - "in conclusion, Mrs Linse is entitled to an award of damages in the total sum of £36,500. The parties should attempt to agree consequential matters such as interest and costs. A draft order should be filed within 14 days of the handing down of this judgment, together with any written submissions on any such matter which cannot be agreed and any application for permission to appeal."