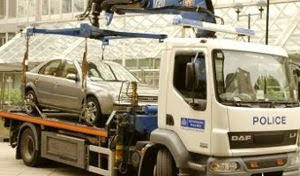 In recent times, the Police have acquired some very remarkable and even draconian powers.  Let's face it, people driving vehicles without a driving licence or insurance are a public danger and, in 2005, Parliament decided to take tougher action to combat this menace.  Motorists may not have even heard of the Road Traffic Act 1988 sections 165A and 165B.  These sections were inserted into the Road Traffic Act 1988 by the Serious Organised Crime and Police Act 2005 s.152.  They empower a Police Officer in Uniform to seize vehicles in certain circumstances  - e.g. is a driver is asked to produce evidence that he has a driving licence or that the vehicle is insured and the driver is unable to do so.  Reasonable force may be used to seize the vehicle.

As an example, consider a car which is seen by the Police using either Automatic Number Plate Recognition (ANPR)  (or some other method) and is stopped because the Police Check indicates that it is uninsured.  The driver is unable to prove there and then that he is insured.  The vehicle is seized and impounded.  The driver is then faced with considerable costs to recover the vehicle even when he is subsequently able to show that,  at the relevant time, the vehicle was insured.  This works on the assumption that the Police information is infallible.  Sadly, that is not necessarily always the case and you could be left stranded miles from home and, possibly, in dangerous or, at best, undesirable circumstances.  Similar consequences can follow if a driver is not able to produce his driving licence and counterpart immediately.

You can check here whether your vehicle shows up as being insured - but don't blame me if the Police technology tells them otherwise !

It appears that some Police Forces are now using this power on a much more frequent basis.  Here is one example from the Metropolitan Police - Justice Seen: Justice Done.  If the vehicle was genuinely uninsured or the driver was driving "otherwise than in accordance with a licence" then fair enough but what if the technology was fallible and the driver was unable to prove his innocence there and then?  You have been warned !
Posted by ObiterJ at Tuesday, February 16, 2010