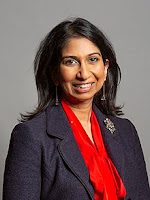 At this point, a brief digression is required
to note the role of the Secretary of State for Justice / Lord Chancellor.

Elizabeth Truss - referred to in Secret Barrister's tweet - was Secretary of State for Justice and Lord Chancellor from 14 July 2016 to 11 June 2017.  In that brief time she achieved little of note. In the period September 2012 to January 2018, the two offices of Secretary of State for Justice and Lord Chancellor were held by four non-lawyers - Chris Grayling, Michael Gove, Elizabeth Truss and David Lidington.  Grayling held the posts from 4 September 2012 to 9 May 2015.  The barrister Lord Pannick described Grayling's performance as "notable only for his attempts to restrict judicial reviews and human rights, his failure to protect the judiciary against criticism from his colleagues and the reduction of legal aid to a bare minimum." One could add that Grayling also pursued a problematic privatisation of parts of the Probation Service. The criticism regarding legal aid is not entirely fair given that the reductions were drawn up during lawyer Kenneth Clarke's time as Lord Chancellor. The Legal Aid, Sentencing and Punishment of Offenders Act 2012 received Royal Assent on 1 May 2012 - before Grayling took post.

In January 2018, the two posts went to David Gauke - a solicitor - and, on 24 May 2019, to Robert Buckland QC MP.  Buckland was called to the Bar in 1991 and practised criminal law. He was appointed QC in 2014.  Whether the two offices should be held by a single individual is a moot point but it is a legacy of the reforms embodied in the Constitutional Reform Act 2005 which also created the Supreme Court of the UK.

The role of Attorney General is extensive and of considerable constitutional importance but is  altogether different to the role of the Secretary of State for Justice / Lord Chancellor.  The Attorney's responsibilities include:

● Public interest functions, for example, reference of unduly lenient sentences to the Court of Appeal, bringing proceedings for contempt of court and intervention in certain proceedings to protect charities

● Legal aspects of all major international and domestic litigation involving the Government, (including the UK’s withdrawal and negotiated settlement in leaving the EU)

The Attorney General is also Advocate-General for Northern Ireland. The Advocate General was created as a separate office upon the devolution of policing and justice powers to the Northern Ireland Assembly on 12 April 2010.

The Attorney is officially the leader of the Bar of England and Wales, although this is merely custom and has no duties or rights attached to it - see Constitutional Affairs Committee. "The Constitutional Role of the Attorney General" (PDF). Government of the United Kingdom.

It should be added to this list that the consent of the Attorney General is required for certain prosecutions. The Attorney may also stop a prosecution by entering a nolle prosequi though this is rarely done.

On 8th February 2016, the then Attorney General (Mr Jeremy Wright QC MP) delivered a speech at University College London (UCL) on his role as "guardian of the public interest" - previous post - 11 February 2016 - The Public Interest. Who should decide?


It is hardly surprising that the extensive role of the Attorney General has been subjected to criticism and calls for reform though these have been largely resisted.


Governance of Britain: A consultation on the role of the Attorney General - Cm 7192


On 27 May 2010, Joshua Rozenberg wrote in The Guardian - "Under governance reforms being debated by leading Whitehall lawyers, the attorney general would remain the government's senior legal adviser but would cease to be a member of the government. The office-holder would be a full-time lawyer, either promoted from within the government legal service or brought in from outside.

However good a lawyer the attorney general of the day may be, MPs are unlikely to have much experience of advising governments. In practice, the attorney takes advice from senior officials and outside counsel. How much better it would be, officials suggest, if there was an authoritative full-time lawyer who could advise the government as a whole, just as in-house lawyers support departments such as the Home Office, the Foreign Office and the Ministry of Justice.

Could such a change happen in the United Kingdom? It already has. On Monday, John Larkin QC was appointed attorney general for Northern Ireland."

Braverman read Law at Queens' College, Cambridge. She lived in France for two years, as an Erasmus Programme student and then as an Entente Cordiale Scholar, where she completed a Master's degree in European and French Law at Pantheon-Sorbonne University.

Braverman is a member of Middle Temple, where she won an Astbury Scholarship in 2005. She completed her pupillage at 2–3 Gray’s Inn Square (now Cornerstone Barristers). From 2008 onwards, she was based at No5 Chambers in London practising in planning, judicial review and immigration law. She was appointed to the Attorney General’s C Panel of Counsel in 2010.  Members of the C Panel are appointed on merit and will have between 2 and 5 years’ advocacy experience but those with more experience can apply

It is therefore fair to say that Braverman is not a lawyer of vast practical experience but, on any fair view, made a promising start to her career at the Bar before opting to move to the political arena. She was elected MP for Fareham in 2015. A prominent Brexiteer, Braverman chaired the European Research Group (ERG).

On 27 January 2020, an article by Braverman was published by Conservativehome.  The article begins -

"Restoring sovereignty to Parliament after Brexit is one of the greatest prizes that awaits us. But not just from the EU. As we start this new chapter of our democratic story, our Parliament must retrieve power ceded to another place – the courts. For too long, the Diceyan notion of parliamentary supremacy has come under threat. The political has been captured by the legal. Decisions of an executive, legislative and democratic nature have been assumed by our courts. Prorogation and the triggering of Article 50 were merely the latest examples of a chronic and steady encroachment by the judges."

Braverman claims that her article is not intended to lambast the judiciary and nor is it a diatribe against human rights. She argues that "the delicate relationship between law and politics is off-balance" and questions the "trespass" by the judiciary into "inherently political terrain for which a legal answer is wholly insufficient."

Breverman concluded by saying - "The law, blunt instrument that it is, cannot be the crucible for political questions upon which divergent views exist within our society. Whether it is political matters like Brexit or ethical questions like assisted dying, only Parliament can fully test the whole panoply of views, nuances and interests. Messy, full of contradictions and anomalies, slow and frustrating- our Parliament remains the only source of decisions which have a legitimacy borne out of commanding a majority vote in the country.

I am pleased that that the Government has promised to update the Human Rights Act to restore the proper balance between the rights of individuals, national security and effective government and to set up a Constitution, Democracy and Rights Commission to ensure that the boundaries of judicial review are appropriately drawn.

Yes, courts should operate to curb abuse of power by government but if a small number of unelected, unaccountable judges continue to determine wider public policy, putting them at odds with elected decision-makers, our democracy cannot be said to be representative. Parliament’s legitimacy is unrivalled and the reason why we must take back control, not just from the EU, but from the judiciary."

It is interesting that Braverman referred to ethical questions like assisted dying. In late 2018 the Supreme Court refused permission for an appeal by Mr Noel Conway - see UK Human Rights blog. In Nicklinson [2014] UKSC 38 the Supreme Court ruled that reform of the Suicide Act 1961 was a matter for Parliament.

Braverman speaks of judges versus Parliament but in practice the executive has considerable control over the business of parliament including the power of prorogation. Much to the obvious annoyance of Ministers, the Supreme Court unanimously held that the purported prorogation for a 5 week period in 2019 was null and void - previous post 27 September 2019.  The truth of the case was that the judgment was in support of Parliamentary sovereignty and the need for the executive to be accountable to Parliament.

Clearly then, here is a new Attorney General who is "on-message" regarding reform of judicial review and human rights.

Reform of human rights protection has been on the political agenda for a considerable time. In 2011, Prime Minister Cameron set up a Commssion on a UK Bill of Rights - previous post 18 March 2011.  I also wrote about the Commission on 16 December 2012 and again on 18 December 2012.  The report has gathered dust ever since as other events such as the 2014 Scottish Independence Referendum and then Brexit assumed greater importance.

Details of the proposed Constitution, Democracy and Rights Commission have yet to be announced. I commented about the proposal back in early January (HERE) and the views of the new Attorney General serve to reinforce my opinion that the primary, but unstated, aim of the Commission is to enhance executive power and matters such as the power to prorogue (close down) Parliament will certainly be at the forefront of constitutional reform.

A footnote from American history:

After winning the 1960 presidential election, President-elect John F. Kennedy appointed his younger brother Attorney General of the USA. The choice was controversial, with publications including The New York Times and The New Republic calling him inexperienced and unqualified.  He had no experience in any state or federal court, causing the president to joke, "I can't see that it's wrong to give him a little legal experience before he goes out to practice law."