In 2018, London (Heathrow) Airport was ranked 7th busiest in the world in terms of passenger numbers. Facts and figures about this two runway airport are
available at Heathrow Our Company.

An Airports Commission reported in July 2015 and concluded in favour of a Northwest Runway at Heathrow noting that such a runway was "technically feasible and [did] not involve massive, untested infrastructure." The construction of this runway was far from being the only recommendation made by the Commission.

The Paris Agreement marked a significant positive step in global action to tackle climate change. The 2016 report considered the domestic actions the UK Government should take as part of a fair contribution to the aims of the Agreement.

The Committee was created by the Climate Change Act 2008

On Monday 25 June 2018, MPs voted 415 to 119 in favour of a motion stating - "That this House approves the National Policy Statement on New runway capacity and infrastructure at airports in the South East of England, which was laid before this House on 5 June 2018" - Hansard 25 June 2018.  The National Policy Statement (or ANPS) clearly stated that the government's preferred scheme was the North West Runway at Heathrow and various alternatives were rejected.

In June 2018, the ANPS was "designated" under section 5(1) of the Planning Act 2008 by Chris Grayling MP who was then Secretary of State for Transport.  The 2008 Act introduced a new system for approving major infrastructure of national importance, such as harbours and waste facilities, and replaced a number of existing regimes under several pieces of legislation. The objective was to streamline these decisions and avoid long public inquiries - see Parliament's website entry about the Planning Act 2008.

The legality of the ANPS was the subject of judicial reviews in accordance with the procedure that Parliament had provided for such challenges to be brought - section 13(1) of the Planning Act.

The case then proceeded to the Court of Appeal and, on 27 February 2020, judgment was handed down - R (Friends of the Earth) v Secretary of State for Transport [2020] EWCA Civ 213 Lindblom, Singh, Haddon-Cave LJJ.

The Court of Appeal addressed two challenges - (1) by Heathrow Hub Ltd. and Runway Innovations Ltd., who proposed extending the northern runway at Heathrow, and (2) by the Mayor of London, Greenpeace Ltd., Friends of the Earth Ltd. and Plan B Earth, concerning the planning aspects of the ANPS and its process.  Challenge (1) was rejected entirely.

Challenge (2) succeeded in one important respect only.  The court held that the ANPS was not produced as the law requires, and as Parliament had expressly provided.

The Planning Act 2008 s5(7) mandates that a "national policy statement must give reasons for the policy set out in the statement."

Section 5(8) then states - "The reasons must (in particular) include an explanation of how the policy set out in the statement takes account of Government policy relating to the mitigation of, and adaptation to, climate change."

The Minister, Mr Grayling, did not take the Paris agreement into account at all.  The court said (para 233 of the judgment) - "On the contrary, as we understand it, he consciously chose, on advice, not to take it into account."

Hence, the statutory regime for the formulation of a national policy statement, which Parliament had put in place in the Planning Act, was not fully complied with. The Paris Agreement ought to have been taken into account (not necessarily followed) by the Secretary of State in the preparation of the ANPS and an explanation given as to how it was taken into account, but it was not. That was, in the court's view, legally fatal to the ANPS in its present form.

The court made a declaration the effect of which is that the designation decision is unlawful and the ANPS will not have any legal effect unless and until the Secretary of State has undertaken a review of it in accordance with the relevant statutory provisions, including the provisions of section 6, 7 and 9 of the Planning Act 2008. Any such review would have to be conducted in accordance with the judgment of the court. The initiation, scope and timescale of any review must and will be a matter for the Secretary of State to decide.

The court stated that its decision must be properly understood.  "We have not decided, and could not decide, that there will be no third runway at Heathrow. We have not found that a national policy statement supporting this project is necessarily incompatible with the United Kingdom’s commitment to reducing carbon emissions and mitigating climate change under the Paris Agreement, or with any other policy the Government may adopt or international obligation it may undertake. The consequence of our decision is that the Government will now have the opportunity to reconsider the ANPS in accordance with the clear statutory requirements that Parliament has imposed"

The government did not oppose the grant of a remedy and did not seek permission to appeal to the Supreme Court.

"Judges kill off Heathrow 3rd runway and Britain getting the modern air transport infrastructure we need, despite the elected Parliament voting for it overwhelmingly. Presumably this is the kind of overreaching undemocratic judicial activism Boris wants to curb ... or perhaps not"

This is an utterly misleading comment in line with recent attacks on the process of judicial review.

The truth is plain enough -
Quite simply, Parliament had required the Minister to do a certain thing and he did not do it. A finding against the Minister in such a situation is "an entirely conventional exercise in public law" - (see para 230 of the judgment). 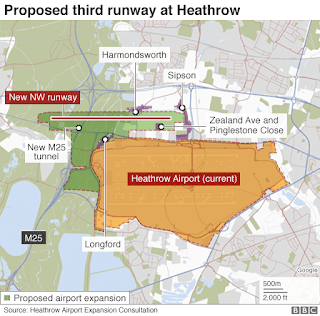