The London Olympic Games 5th August 2012.  Eight men, including Usain Bolt, are about to run the race of their lives - the men's 100m final.  A bottle is thrown from the crowd of spectators on to the track and, in the event, lands behind the runners who are approaching the starting blocks.  The man who threw the bottle was Ashley Gill-Webb.  Here is one newspaper's report of the event.

The judiciary website has published the judgment (dated 11th January 2013) of District Judge Ashworth in which Ashley Gill-Webb was found guilty of offences under the Public Order Act 1986 section 4A and section 5.  The two alternative offences arose from the same incident.

The sentencing remarks deal clearly with the issue in the case, namely Gill-Webb's mental state at the time.  Gill-Webb accepted that his behaviour was abusive and disorderly in that he shouted comments at Usain Bolt and threw a bottle on to the track causing harassment alarm and distress to spectators nearby.  The sole question for the judge to decide was Gill-Webb's mental state.  This was not an entirely straightforward matter.

The required mental state for a finding of guilt on the s4A offence is whether Gill-Webb intended to cause harassment alarm or distress.  For the section 5 offence the required mental element was that Gill-Webb  knew or was aware that his behaviour may be abusive or disorderly - see s.6(4) of the Act. The offences are set out in the Public Order Act 1986.

"I must here observe in respect of the Section 4A charge an important distinction between the impulse or desire to do something unlawful which is not an offence, and actually acting with the intention to do something unlawful which is. A mental instability (other than a legal finding of insanity which does not apply here) may prompt or exacerbate a desire to commit an offence. It does not provide a defence to the charge but may well reduce the culpability of that offender when it comes to sentence."

[Discussion of 'insanity' at Breivik - would he have a defence of insanity in English criminal law?].

The District Judge also (rightly) pointed out that it is for the prosecution to prove the case beyond a reasonable doubt - it is not for a defendant to prove his innocence.

The section 4A offence requires proof of intention and many pages in the law books are devoted to analysis of this term.  It has not always proved to be an easy matter.  It is not proposed to analyse the matter here save to note that intention has to relate to the prohibited result (causing harassment alarm or distress).  Unless there is an admissible admission by the defendant that he had the required intention then the matter has to be proved.  Here, the Criminal Justice Act 1967 s.8 comes into play:


Proof of criminal intent.A court or jury, in determining whether a person has committed an offence, -
(a) shall not be bound in law to infer that he intended or foresaw a result of his actions by reason only of its being a natural and probable consequence of those actions; but
(b) shall decide whether he did intend or foresee that result by reference to all the evidence, drawing such inferences from the evidence as appear proper in the circumstances.


Ashley Gill-Webb's case involved expert psychiatric evidence that Gill-Webb suffered from bi-polar disorder and also that he was affected by a 'manic episode at the time of the incident.'  The experts agreed that the disorder made him impulsive, overconfident and that he could act with impaired judgment and control.  they also agreed that the manic episode contributed to the throwing of the bottle.  However, the experts did not agree about Gill-Webb's intention in throwing the bottle.  One expert (Dr. Adams) - an experienced adult therapeutic psychiatrist - had the view that Gill-Webb could not form any particular intent.  Another expert (Dr. Latham) - an experienced forensic psychiatrist - considered that Gill-Webb could have formed an intention.

Judge Ashworth chose to accept the evidence of Dr. Latham which was more consistent with the available video evidence.  Looking at all the available evidence, the judge found that Gill-Webb had the required intention for both s.4A and s.5.   The facts as found by the judge support this conclusion:

Gill-Webb whilst affected by his mania by-passed security to find his way into the stadium to an area very close by the starting blocks. He was annoyed at Usain Bolt and had with him an empty beer bottle.

Having got into that area he used physical force to jostle and push other spectators to get near to the track.
He shouted out loudly and repeatedly comments aimed at Mr. Bolt.

As the race was about to begin the noise of the crowd abated and the focus of the spectators became fixated on the starting blocks.  Gill-Webb quite deliberately looked over his right shoulder and then round to look over his left shoulder to see if anyone was watching him and then stepped for concealment behind other spectators.

Satisfied that he was not under observation he threw the bottle very close to the competitors who were listening for the starting gun.

The video in the judge's view clearly showed Gill-Webb checking to see if he was under observation before taking the risk of throwing the bottle. Judge Ashworth said - 'I am sure that he was at that point weighing up the chances of being caught before throwing the bottle in an effort to disrupt the start of the race and put off Usain Bolt.  I am sure therefore that he was at that point acting rationally and wrongly and that he intended to cause harassment, alarm or distress to the competitors and accordingly he is guilty of the S.4A offence.'


Had the experts agreed on intention would that have been conclusive?

Strictly, the answer is NO since it is for the trial court (Judge or Magistrates or Jury) to decide whether the case is proved against the defendant.  The medical opinion is just part of the evidence.  There was a time when the opinion of an expert witness on the 'ultimate issue' was not sought but this approach was criticised - e.g. 11th report, Criminal Law Revision Committee (Cmnd 4991).  The rule was abolished for civil cases by the Civil Evidence Act 1972 s.3.    Technically, the rule probably still exists in criminal cases but is generally ignored.

At the time of writing, sentence remained to be passed - but see Magistrates' Courts Sentencing Guidelines at page 87.  The guidelines are not particularly easy to apply to this case.  The action appears to have been targeted at Usain Bolt - see judgment where it is reported that Gill-Webb said - “Usain, I want you to lose, Usain you are bad, you’re an arsehole.”  This may dictate a starting point for sentence of medium level community order.  The presence of a large number of people would make the matter more serious.  The personal mitigation is, of course, the bi-polar disorder suffered by Gill-Webb.

The focus of sentencing will be on the s.4A offence.  No separate punishment is likely for the s.5 offence.

The Gill-Webb incident did not affect the race which was won by Usain Bolt in a time of 9.63 secs (World Record - also held by Bolt - was 9.58 secs). 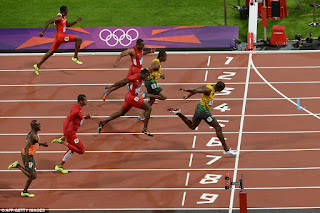 On 4th February 2013, for the section 4A offence, District Judge Ashworth sentenced Gill-Webb to an 8 week community order with an electronically monitored curfew requirement from 7 pm to 7 am daily.  Costs of £1500 to be paid at £20 per week.  The Sentencing Remarks are available via the Judiciary website - here.  On 4th February, Gill-Webb was found guilty of both the s4A and the s5 offences.  At the sentencing hearing, the judge re-opened the s5 conviction but the matter remains on file and will be reviewed on 3rd May 2013.  This course was take because in R (Dyer) v Walford Magistrates Court (decided 16th January) it was held that it was wrong in principle for magistrates to record convictions for both the simple and racially aggravated forms of a public order offence arising from the same incident
Posted by ObiterJ at Saturday, January 12, 2013