In early October I visited a pleasant market town in Derbyshire.  In one of the cut price bookshops I found a copy of Trevor Boyle's "Civil War - The Wars of the Three Kingdoms 1638-1660"  - (see British Civil Wars).  This is a vivid account of those turbulent years from 1638 when the Scots signed the National Covenant to the end of the Protectorate in 1659.  This 17th century conflict, long referred to simply as the "English civil war", was actually war across the three interconnected Kingdoms of Charles I.  The bloodshed in all three continued up to the Restoration  of the Monarchy in 1660.  One aspect of this period was a movement known as The Levellers.  They emphasized popular sovereignty, extended suffrage, equality before the law and religious tolerance.  They produced a number of documents referred to as "Agreement of the People" which pressed for constitutional change.  The Agreement was debated at St Mary's the Virgin Church in Putney - The Putney Debates 1647.  .

One of the leading Levellers was Thomas Rainsborough.  On the first day of the Putney Debates he said:

"I think that the poorest he that is in England has a life to live as the greatest he; and therefore, truly, sir, I think it's clear that every man that is to live under government ought first by his own consent to put himself under that government; and I do think that the poorest man in England is not at all bound in a strict sense to that government that he has not had a voice to put himself under."

Of course, words can only be understood properly
when viewed in the context in which they were said.  17th century England was a radically different place to modern times.  (The same could be said of Scotland or Ireland).  The vast majority of the population had little wealth and, under the system of land tenure, the majority held whatever land they had on the basis of an "unfree" tenure.  Few people had any say in who represented them in Parliament.   At the apex of the country was a powerful King (Charles I) who claimed that he was there by Divine Right and, for a considerable number of years, Charles ruled without a Parliament - (The Eleven Year Tyranny 1629-40).   The law which existed was essentially common law with only a limited amount of statute law.  It was a harsh code with numerous capital offences.

If we now fast-forward to the 21st century, it cannot be said that we are without problems and there are numerous injustices which people still rightly seek to remedy by political means.  As an example, the cuts to legal aid put forward by the coalition government are undoubtedly severe and will hurt the "poorest that is in England."  Examples of problems and injustice could easily be multiplied and the number of problems could expand in the months and years to come.  However, we live under the rule of law; we have the right to vote for a member of Parliament; we have free speech (subject only to certain limits); we are able to openly criticise our government and our judges.    We have an independent judiciary which was hardly true during the days of the Levellers though independence was emerging - (e.g. Case of Prohibitions del Roy decided in the reign of James I).  We have a fiercely independent bar which has a deeply held belief in the rule of law including the fact that the executive must operate within the law.  These, and many other things, are nowadays taken to be our birthright.

It is interesting that Rainsborough's words at Putney have a resonance today in the so-called "Freemen" movement.  This has been growing in recent times and some of them have been seeking to influence those protesting outside St Paul's Cathedral.    Barrister Carl Gardner wrote in The Guardian 16th November - ("The law is not the enemy of protest but an essential tool of impartiality") - that the "freemen" were pushing a "cod legalism."   He wrote:

The "freemen on the land" meme isn't just dangerous: it's politically unattractive, too. Freemen's love of common law seems romantic at first, until you realise it implies a wish to turn back the clock to a time before democratic legislation, a time when some people really were lucky to be free and when others really were enslaved."

In similar vein, Barrister Adam Wagner wrote an article for the UK Human Rights Blog - "Freemen of the dangerous nonsense" - in which he stated:

"This movement is not just silly, it is also dangerous, and seemingly gaining popularity through numerous internet sites."

He goes on to give examples of why he views it as silly.

A third blogpost is "What the weirdos can teach us about citizenship" - where the author (sadly not named) understands the anger of the Occupy London movement.  It is only reasonable to want a fairer society with less power for corporations and banks but it is unfortunate that the movement is in danger of being hijacked by "some weird and maladjusted individuals."  The article asks whether the "freemen" have  "ever really thought what would happen if we all just stepped outside the system, if everyone chose not to participate or abide by the accepted mores of society?" 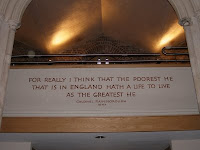 We have the rule of law.  Judges and Magistrates do NOT have to take an oath every time they sit: they take it once and once only.  They are not required to establish their authority to act every time they attend court.  The common law only applies where the position has not been modified by Parliament enacting statute law.  These self-nominated "freemen", spouting their dangerous legal nonsense, are hardly the modern Levellers and their antics detract from the many serious and genuine concerns of the present day?

A further post on this is on the "Nothing Like The Sun" blog - see "The Cat who walks alone" by Francis FitzGibbon QC.  Mr FitzGibbon has drawn my attention to an interesting angle.  The Rev. Dr. Giles Fraser was Vicar of Putney prior to taking up his post as a Canon at St. Paul's. He resigned from St. Paul's in late October.
Posted by ObiterJ at Thursday, November 17, 2011