Some thoughts on a desperate August week

Saturday 13th - brief update:  "Police revolt against David Cameron's reform agenda" - The Guardian.  "Public lack confidence in Tory leaders following disturbances" - The Independent.   "Riot boy's family is kicked out ..." - Daily Mail - which reports on the first case in which a Council is seeking to evict a tenant from social housing.  "Judges warned by Law Society not to hand down 'rushed justice' - Guardian.

This week has seen major and, to my mind, inexcusable, disturbances and criminality in many English cities and towns.  Lives have been lost, buildings destroyed, businesses ruined.  Most businesses will, hopefully, recover.  Others will decide not to bother and their premises will stand empty and boarded up on the "high streets".  The criminal damage and theft will amount to losses to be counted in millions of pounds.  Law and lawyers looked at the Riot (Damage) Act 1866 in a post below.

Amid the tragic images of burnt out buildings and feral looting, there have been some magnificent examples of the English people at their absolute best and the majority of people have expressed their continuing desire to live under the rule of law even if they wish that the criminal courts were generally tougher on offenders.   The example set by Mr Tariq Jahan was exemplary when he appealed for calm in Birmingham following the death of three men including his son Haroon (aged 21).  (The case is being treated as murder).

Lawyer David Allen Green published some
excellent articles in The New Statesman - e.g. "Don't panic: the riots and the rule of law" and Charon QC has an interesting podcast - "Without Prejudice 11" - which considers several legal issues including the riots. 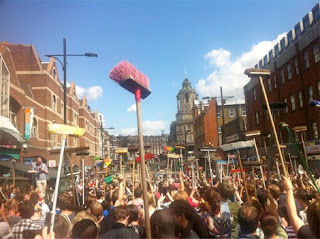 A magistrate - (known by his blogname of "Bystander") - rightly reminds us that defendants are entitled to be dealt with properly according to law and another magistrate published an article in The Guardian - "Dealing with the looters - a beak speaks" - which looks at young offenders and points out that "we are kidding ourselves if we imagine that a spell under lock and key, even when necessary and richly deserved, solves deep-seated problems of parenting, schooling, poverty and abuse."
It seems that the Police were unprepared for the scale of civil disorder which took place and, in the early part of the week, they were criticised for the way they handled matters.  This led to a certain amount of action by people desperate to protect their businesses and homes.  The Police are facing budgetary cuts as well as reforms under the Police Reform and Social Responsibility Bill.

Whatever the Prime Minister has said in Parliament to defend the cuts, the fact remains that the law-abiding citizen is going to be extremely unhappy unless there is delivery of more effective policing on the streets.  This will turn into votes in the ballot box and it could prove to be an enormous mistake if the government declines to review aspects of its policy in this area.  Efficiency in public services is necessary but never at the expense of public safety.

I did not wish to see the use of more extreme methods of policing of disorder such as water cannon, plastic bullets or the use of the military.  Such methods must be a very last resort.  Please see Sir Hugh Orde's excellent letter in The Independent 11th August - "Water cannon make for good headlines - but bad policing."  It would be unwise to ignore such counsel from this highly experienced police officer.  I was also pleased to note that the Civil Contingencies Act 2004 Part 2 was not invoked though, legally speaking, it could have been.

Perhaps it is natural that, in this climate, the ludicrous notion that "human rights" are just for criminals has been raised.    Such claims are popular with some elements in the media but, as Sir Hugh Orde states in his letter, human rights do not prevent effective policing.   They do not necessarily prevent the publication of pictures of people who the police wish to speak to in connection with offences - UK Human Rights blog - "Will publishing picture of rioters infringe their human rights."  Similarly, human rights law does not prevent tough sentencing for serious offending though it does require a sentence to be proportionate to the offence.  Clearly, offences committed during considerable civil unrest merit more severe punishment than perhaps they would normally receive but there is a serious underlying question of proportionality.  As an example, suppose that a relatively low value theft is committed during a time of disorder in the locality.  How should this be reflected in sentencing?  Does it justify a major departure from the usual sentencing framework?  Further questions arise with regard to bail.  Bail should be refused ONLY as prescribed by the Bail Act 1976.  A refusal of bail is not intended to be a punishment.  If, after conviction, a sentence of imprisonment is imposed, it is usual to make allowance for the time spent whilst remanded in custody.

One final thought: this intervention in our affairs from Iran should be treated with the contempt it deserves.

UK RIOTS: police round on government - The Guardian 12th August 2011

and, from a much admired District Judge who speaks for many people - see The Daily Mail 12th August.

How the criminal justice system is dealing with the many young people who have offended is causing concern with some Police Officers being critical of the handling of cases by the courts.  This is a difficult area of the law and the courts are tied by complex requirements.