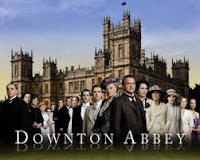 Noticing the other day that the highly successful ITV series "Downton Abbey" is to resume this autumn, I decided to do a "refresher" by watching some of the episodes in Series 1 which I have on DVD.  The series is a fascinating and entertaining presentation of life in a large landed estate just before World War I.

That war resulted in a breakdown of much of the old social order where many people continued to be "in service."   It also eventually led to "universal suffrage" - though not finally achieved until 1928.  Nevertheless, the aristocracy is still with us and, until the House of Lords Act 1999, inheritance of a title meant receipt of a "writ of summons" to attend the House of Lords and to be part of the legislature.  Further reform of the House of Lords continues to be put forward.

In the story, the 6th Earl of Grantham (played by Hugh Bonneville) inherited both his title and Downton Abbey from his father.  The land is subject to what, before 1926, was referred to as an "entail" (or "fee tail").  Like many a student of my day, I read about "entails" but never actually encountered one!  However, what follows is a tentative look at what the law might have said about the fictitious Downton Abbey back just before the 1st World War.

It seems that the ancient
statute known as De Donis Conditionalibus 1285 made an alteration to the law which resulted in the entail.  Until 1926, it was possible to create entails only in land ("real property").  The Law of Property Act 1925 (LPA 1925 - in force 1st January 1926) made changes - e.g. it became possible to entail personal property (i.e. "chattels" such as paintings, jewellery etc).

The LPA 1925 was aimed at simplifying conveyancing of land.  In seeking to do this, the Act reduced the number of possible "legal estates" to just two: the "fee simple absolute in possession" and "the term of years absolute."  However, it remained possible to create any interest in land which could have been created before the Act - including entails (since 1925 referred to as "entailed interests").  After 1925, trustees would have to hold the legal estate in the land but would hold it on behalf of beneficiaries who were subject to the entailed interest.

Since 1st January 1997, it is not possible to create any new "entailed interest" - Trusts of Land and Appointment of Trustees Act 1996 section 2 and Schedule 1 Paragraph 5.  However, the 1996 Act did not seek to terminate any in existence when the Act came into force.

How did entails operate?

A typical entail was created by a conveyance from a person D (donor) to another E (donee) on terms such as ... Downton is conveyed to ... "E and the heirs of his body".  An alternative might have been ... to "E and the heirs male of his body".  (Other forms were possible).  This had the effect of enabling E to hold the land for his life and then his direct descendants to take the land but they would have to hold it for their own heirs.  This would continue down the generations until there were no further heirs entitled to take.  (At that point, the land would return to D or to D's successors).  In actual practice, it was usual to resettle the land each generation.

Was it possible to stop the succession?

The common law developed court actions known as "common recovery" and "fines" which enabled the entail to be "barred."  For example, E could have used a "common recovery" to not only bar the entail but also to obtain the fee simple in the land (the "fee simple" being the largest possible estate in land allowed by law).  If E did this, the land would then have been entirely at his disposal.  These old actions were replaced under the Fines and Recoveries Act 1833.   All that was then required was a deed known as a "disentailing assurance."  The 1833 Act section 15, enabled an "actual tenant in tail" to bar the entail.

The general policy of the law was that it was not permissible to prevent the barring of an entail.  There were some exceptions, the main one being certain entails created by Act of Parliament such as the Duke of Marlborough's estate at Blenheim.

Parliament stepped in to amend the law relating to "settlements" by enacting the Settled Land Acts of 1882, 1884.  Essentially, these Acts were aimed at improving powers to manage "settled land" and to make it easier to sell, lease, mortgage the land etc.  They did not affect the rights of a "tenant in tail" to bar the entail using the 1833 Act.  The Acts of 1882 and 1884 were mostly replaced by the Settled Land Act 1925 (beloved of many a law student)!

Downton Abbey is interesting because we are told that the 6th Earl is unable (and unwilling) to do anything about the fact that his daughters cannot inherit.  On Lord Grantham's death the land would pass to the solicitor from Manchester - Mr.Matthew Crawley (played by Dan Stevens).  Mr Crawley is described as a "distant cousin" of the 6th Earl.

My reading of this old law is tentative.  Provided that the 6th Earl of Grantham was himself an "actual tenant in tail" he could have obtained the fee simple in Downton by executing a disentailing assurance.  Had he done so, he could then presumably have left the land in his will to whomsoever he pleased including, had he so wished, the glamorous and flirtatious Lady Mary (played by Michelle Dockery).

It's an interesting even if mostly historical angle.  Is there a weakness in my argument?  Of course, the story line is that the Downton entail cannot be "broken" / barred.  If so, why?

I would be very interested in any expert views - especially if you disagree with my reading.

For a recent case see Re P [2009] EWCOP 163 where Lewison J offers a concise summary of what an entailed interest is.

Settled Land - a nuisance lurking in the law:   One reason for passing the Trusts of Land and Appointment of Trustees Act 1996 was that, far too often, a land settlement could be created inadvertently particularly by persons making "home-made" wills.  For example, Alan might have said in his will that his semi-detached house on Acacia Avenue was to go to his wife Brenda for life and then to his son Charles.  This created a settlement and invoked the rigour, complexity and expense of the Settled Land Act 1925.