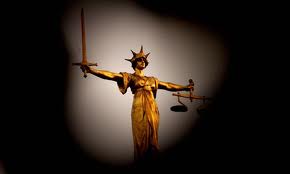 On Friday 2nd November, an "interesting exchange" was reported to have taken place in the High Court.  The Guardian - Torture claims halt Ministry of defence transfers to Afghan jails - reported that the MoD was seeking to transfer "insurgents to Afghan jails" but the High Court blocked the transfer having heard evidence that they would be handed over to a "notorious torturer and alleged killer."

Baroness Warsi - (Foreign and Commonwealth Office) - had failed to question assurances by Asadullah Khalid, the head of the Afghan National Directorate of Security (NDS), even though it is alleged that he has been personally been involved in torture.

The British government is seeking to lift a 2010 moratorium on detainee transfers - (see Amnesty 2nd November).  It was argued that transfer of detainees to the Afghan prison at Lashkar Gah was necessary.   From there, further transfers to other jails would very probably then follow.   It was alleged that those other jails included places where prisoners had been tortured.  For the government, Mr James Eadie QC argued that delays in transferring the prisoners to what he called "a sovereign state's criminal justice system" could damage the UK's relations with the Afghan government.   Some detainees might have to be released from British custody if they could not be handed over to an Afghan jail, thereby endangering the lives of British soldiers and the local population.  Safeguards, including monitoring of Afghan jails by UK officials, had been put in place.

The "interesting exchange" came about when Dinah Rose QC referred to the Head of the NDS as "Mr Khalid the Torturer" and argued that Baroness Warsi must have received a Foreign Office briefing before meeting him.  Rose QC reportedly said to the court - "Baroness Warsi met him and shook his hand, and I hope she washed her hands well afterwards."

Two whips had been found at Lashkar Gah prison in September.  Eadie QC sought to minimise this arguing that they were insufficient evidence for a reasonable prospect of success at a full court hearing into the matter scheduled for later this month.

"That is not enough", Eadie said, referring to the weight of evidence. "Not enough whips?", asked Lord Justice Moses.  "My Lord, this is a serious issue," Eadie replied. "Exactly", said Moses.

The court hearing in a case such as this offers an example of what might be heard under Closed Material Procedures if the government's Justice and Security Bill is enacted.

Military involvement overseas - (which was certainly a penchant of the Labour governments in the period 1997-2010) - brings the inevitable consequence of having to manage prisoners.  Nevertheless, the UK has obligations relating to the treatment of prisoners under the Geneva Conventions referred to in the very recent Supreme Court decision of Rahmatullah.  The UK also has obligations under the United Nations Convention against Torture

The government claims that it takes its obligations seriously and that it does not permit its armed forces or other personnel to engage in torture or other ill-treatment of detainees.  However, the government is displaying a willingness to rely on diplomatic assurances even from seemingly dubious sources that transferred detainees will not suffer torture - see, for example, Amnesty 'UK ordered to continue moratorium on detainee transfers in Afghanistan.'  A report earlier this year by the Afghanistan Independent Human Rights Commission indicated torture of Danish prisoners following their transfer -  Torture, transfer and denial of due process: The treatment of conflict related detainees in Afghanistan

The government chose to settle the Binyam Mohamed litigation at an undisclosed cost.  The immediate government response was to bring forward the much criticised Justice and Security Bill.  Trenchant criticism of the Bill has come from numerous sources:  Equality and Human Rights Commission; Amnesty; UN Rapporteur on Torture; Liberty; Justice; Reprieve and Special Advocates.  David Anderson QC (Independent Reviewer of Terrorism Legislation) has indicated that he considers that the bill addresses a genuine problem in a disproportionate way - The Guardian 19th June.  See also David Anderson QC's evidence to the Justice Committee 16th June 2012 where Anderson said:

Despite this volume of informed criticism, the government continues to press its case for this Bill with Kenneth Clarke MP arguing that civil liberties groups are being too "simplistic" and purist in their opposition to the government's justice and security bill   - see The Guardian 2nd November.   Clarke also points out (rightly) that the Bill will enhance Parliamentary supervision of the security services.  As the UK Human Rights blog (5th November) points out:

"The BBC reports that, in a speech to think tank Policy Exchange, Ken Clarke (who despite losing his job as Justice Secretary is still responsible for steering the Justice and Security Bill through Parliament) accused civil liberties campaigners of creating “fanciful conspiracy theories” over government plans for secret court hearings, arguing that the bill would boost the accountability of the intelligence and security services by allowing evidence to be heard in court that had never previously been allowed. He warned that they were potentially scuppering “a golden opportunity for reform”. A short summary video of the speech can be seen here, full speech to follow."


The very fact that the government is determinedly pushing the Justice and Security Bill through Parliament demonstrates their desire to keep many matters which come before the courts out of the public eye as far as possible.  The Bill would, if enacted, be a major extension of closed material procedures which are already used in at least  21 areas - see Joint Committee on Human Rights 16th report (para 58):-

The Justice and Security Bill will not be the only barrier to justice.  Traditionally, English law has offered the government extensive leeway in certain areas governed by so-called Royal Prerogative powers - particularly, defence and foreign affairs.  (They are theoretically powers exercisable by the Crown but, in practice, are exercised by Ministers).  These are areas of forbidden ground where the judges have feared to tread.  If an area of activity is declared to be non-justiciable then the courts will not hear claims related to it.   In Rahmatullah, the Supreme Court noted (para 66):

In R (Abbasi) v Secretary of State for Foreign and Commonwealth Affairs and the Secretary of State for the Home Department [2002] EWCA Civ 1598; [2003] UKHRR 76, dealing with a submission that decisions taken by the executive in its dealings with foreign states are not justiciable, Lord Phillips MR said at para 106 (iii) “… the court cannot enter the forbidden areas, including decisions affecting foreign policy.” And in R (Al Rawi) v Secretary of State for Foreign and Commonwealth Affairs (United Nations Comr for Refugees intervening) [2008] QB 289 Laws LJ, at para 148, said: “This case has involved issues touching both the Government's conduct of foreign relations, and national security: pre-eminently the former. In those areas the common law assigns the duty of decision upon the merits to the elected arm of government; all the more so if they combine in the same case. This is the law for constitutional as well as pragmatic reasons …”

Where an area is non-justiciable, the only body able to hold the Minister to account is Parliament and, maybe, the vagaries of opinion offered, usually, by the media.

In Rahmatullah itself, there was argument that the matter was non-justiciable since it was connected with foreign affairs.  On the facts of the case, the court rejected this - Rahmatullah at paras. 65 to 70.

European Convention for the Prevention of Torture ... etc

The [Justice] Gap - 9th November - Secret Courts and Justice in the Dark
Posted by ObiterJ at Monday, November 05, 2012